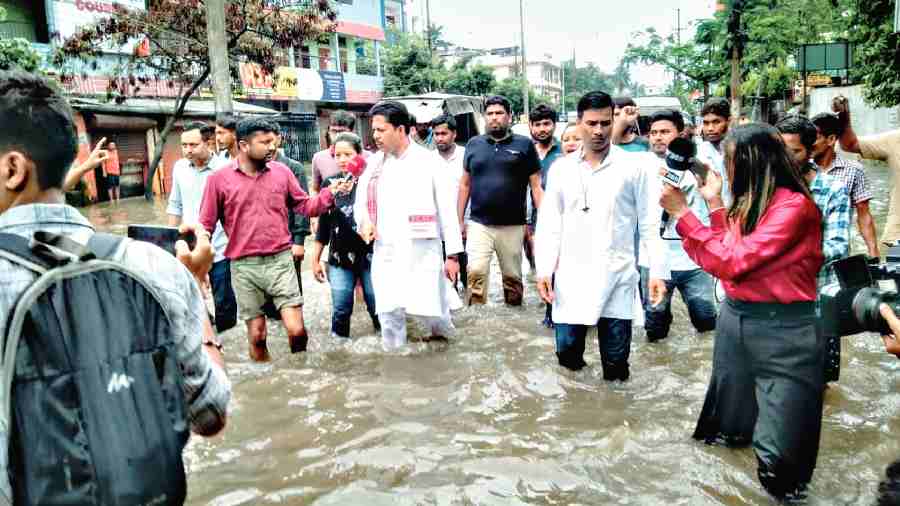 The Opposition Congress and the Raijor Dal on Wednesday went after the BJP-led administration in Assam for not being able to resolve Guwahati’s flash flood woes.

Assam PCC president Bhupen Kumar Borah, while on an inspection of flood-hit Hatigaon are here, fired the first salvo by urging Guwahati residents to protest against the rain-induced flash flood which has not only disrupted normal life since Monday evening but also claimed four lives due to landslides.

Borah said people voted the BJP seeking change. “BJP leaders always mock us whenever we try to raise any issue by asserting they have won five straight elections in Guwahati since 2014. Their boast has now seen Guwahati go under water. They have now urged people to stay indoors. That is why I appeal to the people of Guwahati to come out and protest? How long can conscious Guwahatians stay indoors due to flash flood? It is time for people to come out and lodge a strong protest to seek the change they had voted for.”

The BJP had made 24X7 drinking water and flood-free Guwahati its key poll planks in the Guwahati Municipal Corporation elections that it won in April. However, rain-induced flood and landslides since Monday night has disrupted normal life, exposing the “inefficacy” of administrative measures to resolve the issues.

Unregulated hill-cutting, construction in the hills and wetlands, heavy siltation and garbage clogging are few of the reasons for the worsening situation, most claim.

The Congress leader, standing in knee deep water, raised the twin issues while going after the BJP which never let go of any opportunity to ridicule the Congress the way it is being run or its serial electoral losses.

“When the Congress couldn’t deliver, BJP wanted parivartan.… People voted for parivartan, voted for BJP for five straight times in Guwahati.… Now people have to live under water. How long can they stay under water.… People should protest seeking a solution within a deadline.… Where is the government today, where are the ministers.… BJP said they will resolve the drinking water and flash flood issues. Is this the way they are trying to resolve the drinking water issue? They have clearly failed.”

The Congress leader, standing in knee deep water, raised the twin issues while going after the BJP which never let go of any opportunity to ridicule the Congress the way it is being run or its serial electoral losses.

Raijor Dal president Akhil Gogoi and sitting MLA too went after the BJP-led government by demanding an apology from chief minister Himanta Biswa Sarma. He also demanded that Sarma announces a plan to mitigate the flood issue.

“He should visit the affected people and apologise for the disruption caused by the flash flood. He has been with the ruling parties for over 22 years  (nearly 15 years with the Congress and seven years), he had been Guwahati Development Department minister for five years. What did he do?” Gogoi asked.

He said there used to be flash flood in Guwahati during the Congress rule in select places.

“But after the BJP came to power the flood issue has aggravated. Now Guwahati is under water almost everywhere! There is so much water that we can ply ships under Union shipping minister Sarbananda Sonowal in the city,” Gogoi said.

Sonowal was the chief minister of the first BJP-led government in Assam from 2016 to 2021 Assembly elections. He was replaced by Sarma after the polls which the BJP-led alliance won for the second straight time.