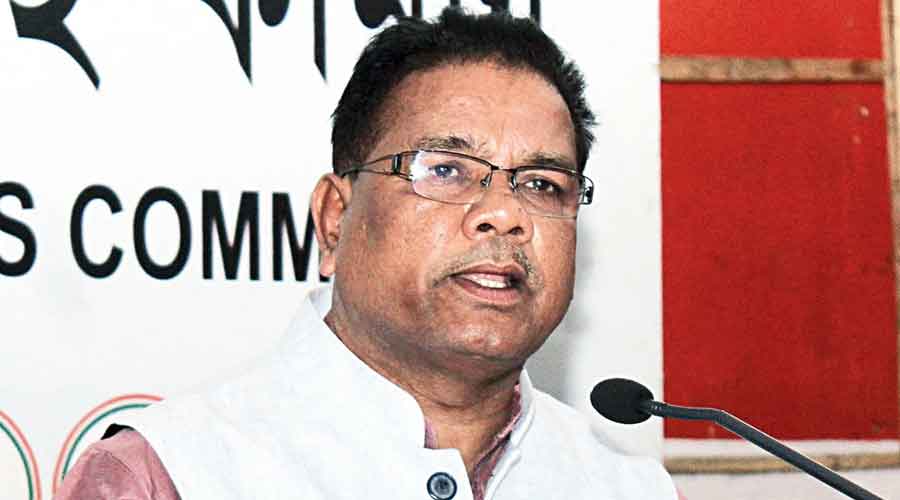 Assam PCC chief Ripun Bora said that a meeting with the CPI and the CPI-ML held on October 15 discussed the prevailing political situation and the need for a joint and appropriate response by the Opposition
File picture
Umanand Jaiswal   |   Guwahati   |   Published 27.10.20, 12:10 AM

Opposition parties  in Assam will be holding joint protests against the “misrule” of the BJP-led government, a development which takes them a step closer to the proposed mahajot (grand alliance) to take on the ruling alliance in next year’s Assembly polls.

The push for a mahajot by the Congress, Left parties and the AIUDF has become inevitable because the BJP, despite its “failure” to fulfil its pre-poll promises and imposing the Citizenship Amendment Act, remains on a strong wicket, Opposition members have admitted in private.

Assam PCC chief Ripun Bora told The Telegraph that a meeting with the CPI and the CPI-ML held here on October 15 discussed the prevailing political situation and the need for a joint and appropriate response by the Opposition.

“More than pre-poll mahajot, we discussed and decided that all anti-BJP parties should come together to end the BJP’s misrule. We have decided to hold joint street protests, joint meetings, joint press meets with the Left against the BJP’s misrule and anti-people policies across the state. We will prepare a common protest schedule soon. The Left also agrees to the need for a mahajot. We will continue to hold such meetings to bring other anti-BJP parties together,” Bora said.

The first of the joint news meets took place on October 20 and the first joint protest will take place after Durga Puja.

Apart from the CPI, CPM and CPI-ML, the Congress and the AIUDF are also inching close to sealing a pre-poll alliance. However, not everyone in the Congress, especially those from Upper Assam, are too keen on an alliance with the AIUDF. The BJP considers the AIUDF as a party that “espouses” the cause of illegal migrants, a very emotive issue in the Brahmaputra Valley.

On the other hand, neither the Krishak Mukti Sangram Samiti-backed Raijor Dal or the Assam Jatiya Parishad, which is backed by the student groups All Assam Students’ Union and Asom Jatiyatabadi Yuba Chatra Parishad, have decided to stay away from the Congress and the AIUDF. But the Congress will continue to engage with these new parties.

Bora said Opposition forces have to unite and expose the BJP’s game plan of polarising voters and the alleged scams taking place under the ruling dispensation, while referring to the senior BJP leaders’ bid to fan passion by projecting the 2021 polls as a “clash” of civilisations and cultures, the “imposition” of Arabic, the “continued” invasion of Mughals and “closure” of government-run madrasas from November.

“The BJP is trying to polarise voters along the Hindu-Muslim line and to distort or rewrite history. We will have to unite to counter this narrative. Muslims too have contributed towards building India and Assam. We will continue to oppose the unconstitutional CAA,” Bora said.

The PCC has been demanding the resignation of chief minister Sarbananda Sonowal over the sub-inspector recruitment scam on moral grounds since he also holds the home portfolio that looks after the police department. A serving superintendent of police has been arrested in connection with the case.

State BJP leader Himanta Biswa Sarma said, “Where are these Left parties? The PCC chief is just trying to increase the number of allies but it will be of no help.”

The Left parties have no MLA in the 126-member Assam Assembly.