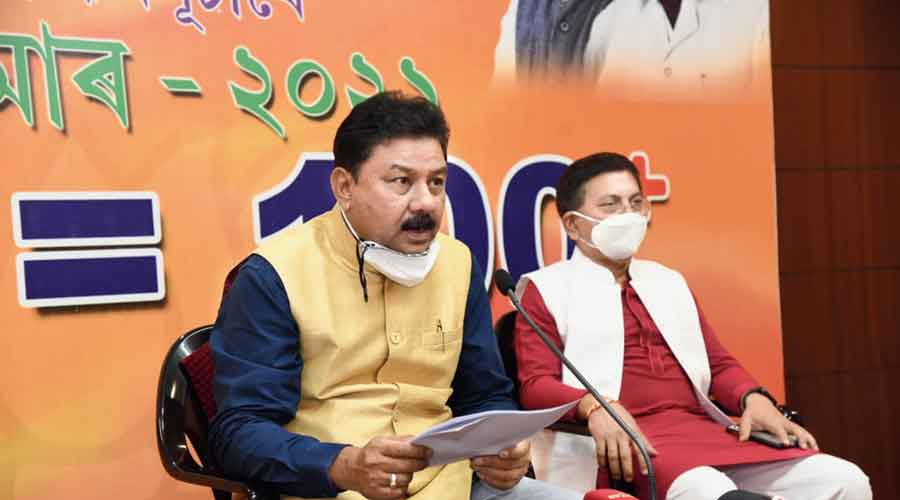 The ruling BJP and the Opposition Congress in Assam have all but junked the exit polls announced on Thursday evening since these were not “exact” polls with the former even releasing its own “exit” polls.

Assam state BJP president Ranjeet Kumar Dass released the party’s two-page assessment, referred to party insiders as their own exit polls, complete with the seats the party was winning as well as the seats of its allies — Asom Gana Parishad (AGP) and United People’s Party Liberal (UPPL ) — were winning.

The BJP’s “winnability” list shows the ruling party bagging 70 seats while the AGP eight and UPPL five, much more than the simple majority mark of 64 in a house of 126. It has also listed 21 seats as doubtful,which means it could go either way.

In the run up to the polls, the BJP regularly asserted it would win 100-plus seats.

Assam had a three-phase Assembly polls on March 27, April 1 and April 6 with the Congress-led 10-party mahajot mounting a strong challenge to unseat the BJP-led four party mitrajot but all the exit polls have put BJP ahead of the Congress. Counting of votes will take place on May 2.

State BJP chief spokesperson Rupam Goswami told The Telegraph that exit polls are “not exact” polls even though most of these predicted the party retaining power.

“We also have our own grassroots assessment which was released by our state president. Our assessment gives us 85 seats, two more than what is in the list. Exit polls are not exact polls. We are in a comfortable position,” Goswami said.

State BJP MP Pallab Lochan Das, too, said the BJP would be winning a majority on their own.

“People have voted for our government’s performance, especially our Covid management, beneficiary schemes, especially those aimed at the women folk, and overall development. Covid management and beneficiary schemes were the real game-changers, which touched people,” Das, a prominent tea community leader, told this newspaper, adding the people have rejected the “anti-Assam” Congress-AIUDF alliance.

The Congress understandably does not agree with the exit polls nor the BJP’s assessment. State PCC president questioned the basis on which exit polls are held. “What is the scientific basis? What is the sample size? Very small. And this time they did not visit the interiors because of Covid-19. These polls are manipulated. Our mahajot is winning at least 75 seats,” Bora said.

“We have been saying from the outset that we are winning, our alliance will be getting 77 seats. Wait for May 2. We are winning because of Opposition unity and for effectively reaching out to the tea community and the unemployed.”

In 2016, the BJP-led alliance had won 86 seats while the Congress and the AIUDF, contesting on their own, had won 26 and 13 seats respectively. In place of the BPF, the BJP this time joined hands with the UPPL.

AICC secretary Bhupen Kumar Borah too felt that it would be better to wait till May 2. “People have voted against BJP’s non-performance and polarisation agenda, for failing to fulfil the promises it made before the 2016 Assembly polls — of protecting jati, mat and bheti,” he said