Speaker Biswajit Daimary says the issues in the three notices are important, but refused to adjourn the House to take those up for discussion 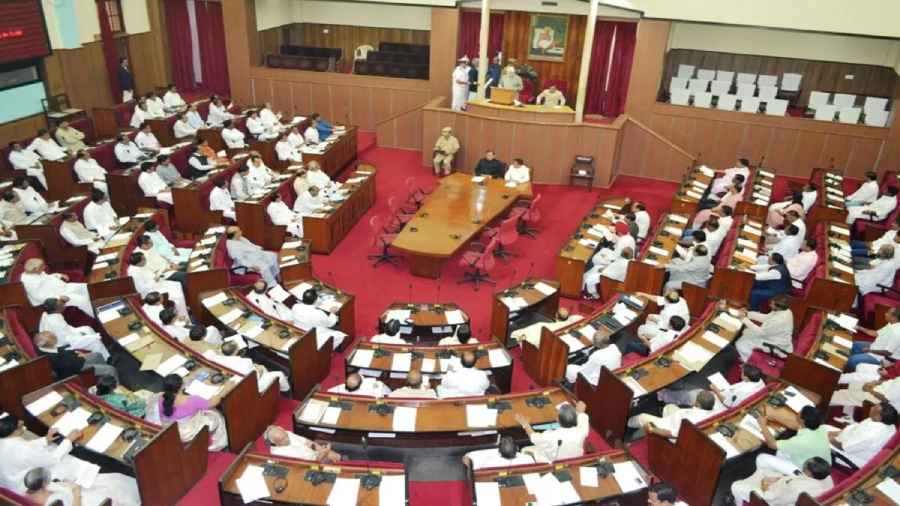 The Congress party and Independent MLA Akhil Gogoi brought in two motions on the first day of the Autumn Session, seeking discussion over the state government's decision to teach mathematics and science in English from Class 3 onwards in vernacular medium schools.

The AIUDF, in its motion, wanted to discuss the series of eviction drives carried out across the state, and the condition of the evicted families.

The adjournment motion is an extraordinary procedure which, if admitted, leads to setting aside the normal business of the House for discussing a definite matter of urgent public importance.

Introducing his party's motion, Leader of the Opposition Debabrata Saikia said: "The decision to impart education in English will have an adverse impact on school kids... Therefore, we need to discuss the same urgently."

Supporting Saikia, Gogoi said the Assam government's decision is in contrast to the Center's National Education Policy, which emphasises more on learning in the mother tongue.

"The administration is also shutting schools by closing these down, and through merger and amalgamation. They have also stopped provincialisation," he alleged.

Speaker Biswajit Daimary said the issues in the three notices are important, but refused to adjourn the House to take those up for discussion.

"These topics are already being discussed via other means. Akhil Gogoi's notice is already raised through a question by an MLA. The Congress notice is scheduled in the Zero Hour.

"The AIUDF's notice can also be discussed in some other way. I don't think adjournment is necessary," he said.

Disagreeing to the proposal, the Congress MLAs and Gogoi went to the Well of the House and held aloft placards to press for their demands.

Chaos prevailed as the opposition members shouted slogans, which were countered by the ruling MLAs.

The Speaker then adjourned the House for 10 minutes.

When it reassembled after around 20 minutes, Parliamentary Affairs Minister Pijush Hazarika said the government is ready to discuss the issue of teaching in the mother tongue in the House if the topic is raised through other means.

The Congress party and Gogoi subsequently withdrew their adjournment motions.

AIUDF MLA Aminul Islam, meanwhile, said the party's notice be taken into consideration as it was related to human rights violation .

Daimary asked him to raise the issue via other means, but AIUDF members continued with their demand, and staged a walkout.

The road ahead for Assam