Khairbani garbage treatment plant likely to be cancelled amid protests 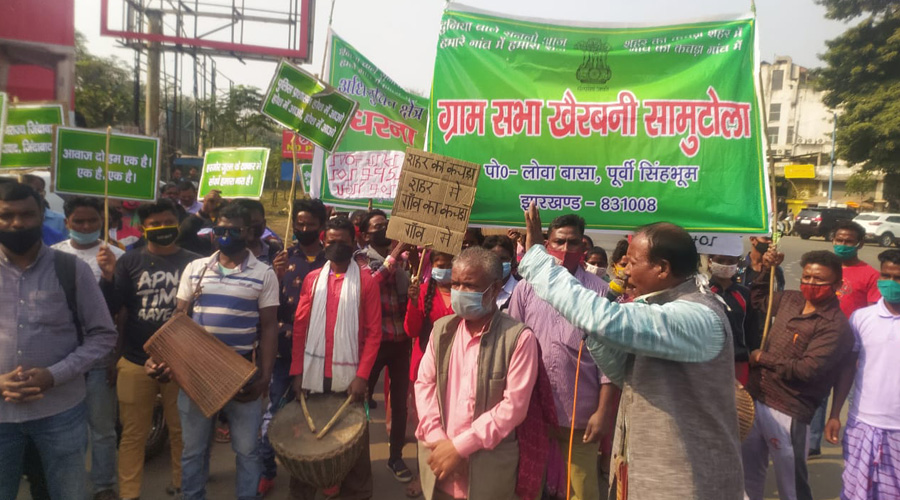 Protesters demonstrate with traditional drums against the construction of a waste management plant at the office of the Jamshedpur Notified Area Committee in Sakchi, Jamshedpur, on Friday.
Animesh Sengupta
Kumud Jenamani   |   Jamshedpur   |   Published 18.12.20, 08:58 PM

The ambitious solid waste treatment plant at Khairbani village of Saraikela’s Govindpur panchayat is likely to fall through as locals protested strongly on Friday against its construction. The project was already stalled since 2013 for the same reason.

Protesters on Friday demonstrated in front of the Jamshedpur Notified Area Committee office at Sakchi against the project and imposed a ‘Janata Curfew’ at its site in Khairbani.

Over 500 agitators, under the banner of Gram Sabha Khairbani, Samutola, demonstrated in front of the office of the committee after a team of the civic body had inspected the site of the proposed solid waste treatment plant at Khairbani on Tuesday.

Protesters equipped with bows and arrows carried out an hour-long demonstration as they beat their traditional drums. They also submitted a memorandum to the civic body's special officer, Krishna Kumar.

The Jamshedpur Notified Area Committee has been making attempts to get the ambitious project executed for seven years but faces strong resistance by the local residents who think once the project gets through in their locality, the environment will be polluted.

The executing agency of the project had raised the boundary wall at the project site, but had to stop work after the residents of Khairbani had resorted to violent protest against the project in 2013.

In the memorandum, Rakesh Hembram, president of the protesting outfit mentioned that when the residents of Khairbani are opposed to any solid waste treatment project there, they why did the civic body send a team to the place for inspection again.

“We, the residents of Khairbani will no way allow the district administration to set up any solid waste treatment plant there. The project site spread over 34 acres of land is now being developed as a forest stretch. Any kind of initiative by the administration for the proposed project at Khairbani will be protested violently. The project will be dropped immediately,” Hembram said in the memorandum.

Demka Soy, another key leader of the outfit present during Friday’s demonstration said that from Friday, they will impose a ‘Janata Curfew’ at the project site.

“We are imposing ‘Janata Curfew’ surrounding the project site. Our men will be keeping guard of the area with bows and arrows. If any official from the JNAC is spotted at the project site, he or she will have to face dire consequences,” he said.

Krishna Kumar could not be contacted for comments.

However, a senior official of the civic committee confirmed the demonstration by the protesters on Friday.

“We had planned to resume the construction work at the proposed solid waste treatment plant in Khairbani. A team of the JNAC had, therefore, visited the site on Tuesday following which the local residents demonstrated in front of the office, protesting against the project. It appears that the proposed solid waste treatment plant will not come up at Khairbani given the situation there,” he said requesting anonymity.

It had been envisaged that solid wastes accumulated from civic body areas in Jamshedpur, Mango, Jugsalai and adjoining Adityapur municipal corporation will be treated at the Khairbani plant, about 15 kms away from the heart of the city, thus getting rid of the municipal garbage of the steel city and Adityapur.