Advertisement
Home / India / This is not a small feat, keep it up: PM Modi to triumphant shuttlers

This is not a small feat, keep it up: PM Modi to triumphant shuttlers 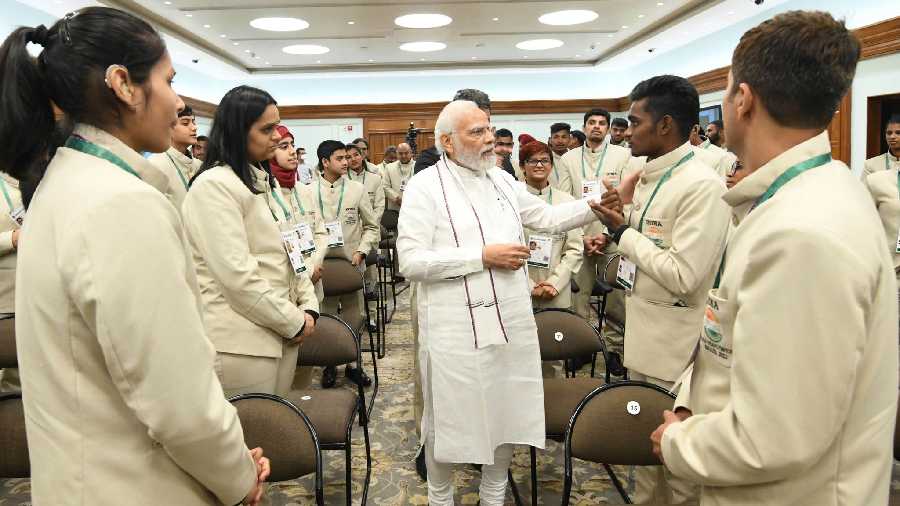 This is not a small feat, Prime Minister Narnedra Modi said while hosting the victorious Thomas Cup team, players of which were chuffed to get the backing of the country's premier.

Few days after congratulating the players over telephone for their historic triumph at the prestigious tournament in Bangkok, PM Modi met in person and interacted with the badminton squad, which also included players from the women's Uber Cup team.

Interacted with our badminton champions, who shared their experiences from the Thomas Cup and Uber Cup. The players talked about different aspects of their game, life beyond badminton and more. India is proud of their accomplishments. https://t.co/sz1FrRTub8

"I congratulate the whole team on behalf of the nation. This is not a small feat. You have done it. There was a time when we were so behind in these tournaments that no one would know here," said Modi.

During his interaction with the champions, an elated PM relived the memory of the historic Thomas Cup campaign where India clinched gold medal by defeating favourites Indonesia.

Modi said that India were able to hoist their flag in the competition after decades and it was not a small achievement.

He congratulated the team for their efforts and said that people earlier never cared for these tournaments, but thanks to the Thomas Cup win, the country took notice of the team and the sport of badminton.

"The 'Yes, we can do it' attitude has become the new strength in the country today. I assure you that the government will give all possible support to our players," said the prime minister.

He congratulated senior player Kidambi Srikanth for the manner in which the 29-year-old had shouldered the responsibility of spearheading the Indian challenge, specially in his final game in the championship.

"I can very proudly say that no other athlete in the world can boast about this, sir. Only we have this privilege of talking to you immediately after winning. First of all, thank you so much, sir," Srikanth said.

"Athletes will be proud to say that we have the backing of our prime minister," he added.

Chief national coach Pullela Gopichand said, "PM follows the players and the sport, and his thoughts connect with the players."

As far as doubles coach Mathias Boe was concerned, he said, "I have a been a player and won medals, but have never been called by my PM."

Star shuttler Lakshya Sen gifted the PM Almora's famous 'bal mithai' after he expressed his interest to savour the taste of the sweets.

"The PM asked for Almora's bal mithai and I got it for him. It is touching that he remembers small things about players," Sen said.

"We feel very motivated whenever you meet us, interact with us. I hope I keep winning medals for India, keep meeting you, and keep getting bal mithai for you," the youngster added.

The PM asked what is there in the soil of Haryana that it keeps producing one great player after another?

Woman shuttler Unnati Hooda, who hails from Haryana, was delighted at meeting the PM.

"Sir, what motivates me is that you don't discriminate between the medallists and non medallists," Hooda said.

India capped off their historic Thomas Cup campaign by blanking 14-time champions Indonesia 3-0 in the finals.