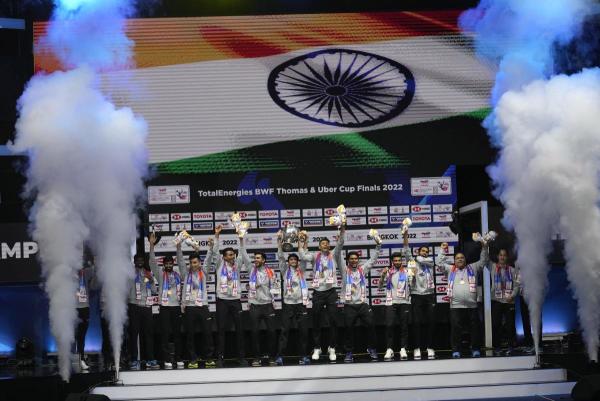 Dishing out a performance for the ages, India's men's badminton team lifted the Thomas Cup title with a commanding 3-0 win over powerhouse Indonesia on Sunday, a historic triumph that will enhance country's status in the sport.

World Championships medallist Lakshya Sen, Kidambi Srikanth and doubles players Chirag Shetty and Satwiksairaj Rankireddy delivered when it mattered the most as they stunned the 14-time champions to win the prestigious team championship for first time ever.

An incredible week culminated in a fitting manner for Indian badminton as the country had never reached the summit clash of the world's most prestigious team event before.

The underdog Indian side had not even reached the last-four stage since 1979 and ended up upsetting formidable Malaysia and Denmark en route the summit clash.

After being off-colour in the knockout stages, young Sen handed India a 1-0 lead with a come-from-behind 8-21 21-17 21-16 win over world number five Anthony Sinisuka Ginting in a superb show of temperament and skill.

"Being 3-4 points down didn't matter because I knew I was going to play from the better end and I can open up and he will be under pressure," said Sen after the tie.

"This one is for the team they have been backing me throughout. I have played well but not got the results. I'm happy that I pulled the first set for the team," he added.

The country's best doubles pair of Rankireddy and Shetty then showed nerves of steel as it saved four match points in the second game to eventually outwit Mohammad Ahsan and Kevin Sanjaya Sukamuljo 18-21 23-21 21-19.

The superlative show earned the Indian team a handsome one core reward from the sports ministry .

Sen gave a terrific display of his mental fortitude as he recovered from the opening game reversal to outwit his higher-ranked opponent. It was his second win in as many career meetings against Ginting.

The match was fast-paced with the two players producing angled returns in the rallies to put each other in awkward positions.

At the break, Ginting was 11-7 up and it was a one-way traffic there after as the Indonesian easily walked away with the first game.

After the change of sides, Lakshya played better and led 7-4 before entering the break with four-point advantage.

Ginting mounted his attack to narrow the lead to 11-12 but Sen kept a tight grip on the rallies and grabbed five game points and took the match to the decider.

Sen continued to engage his rival in rallies but Ginting rode on his precision to make it 5-1. The Indian showed great temperament as he slowly scripted a comeback, cutting the lead to 6-8.

Ginting managed to establish a 11-7 lead at the break with Sen going to net.

Back in the better side of the court, Sen started dominating the rallies as Ginting flunked the lines twice, allow the Indian to claw back at 12-12 with a cross court smash after a long rally.

Sen slowly pulled away with a flurry of points to move to 18-14.

A quick return to serve from Sen and a wide shot from Ginting took the Indian to four match points and he converted with another tight net shot, which kissed the tape and fell over.

Sen fell flat on the court in disbelief.

Next it was Satwik and Chirag's turn to own the stage and they showed their tenacity against Ahsan and Sukamuljo.

After losing the first game narrowly, India came back strong in the second and took the match to the decider after saving three match points.

After a tight battle, it became 16-16. India showed better nerves and won a crucial video referral. Satwik unleashed a smash and once Sukamulyo went to net, it was two match point advantage for India.

Indonesia saved one but there was more drama in store as Satwik next received a yellow card for delaying to get ready for a serve. But Chirag produced a cross court smash to close the contest and let out a roar as India were up 2-0.

In the second singles, Srikanth played a measured game, keeping the rallies short and nailing it every time the shuttle was in his hitting range. It worked as his precise smashes on both the flankes earned him points.

Srikanth was 8-3 up but he committed too many unforced errors, allowing Christie to draw parity at 15-15. The Indian though kept things under control, making it 20-16 and sealing it when Christie went to net.

The second game was no different but Srikanth managed a three-point advantage at the interval. After the break, Christie turned the tables with a six-point burst from 10-13 to jump to take a three-point cushion.

However, a couple of errors from Christie and Srikanth drew level at 18-18.

Another exciting rally ended with a jump smash as Srikanth was two points away from a win. However, Chirstie was the first to move to game point when the shuttle got deflected from the net.

Srikanth managed to save one but Christie again moved to game point with a quick reflex.

Srikanth then grabbed a championship point with a smash and sealed it with another cracking high-jump smash.

The Indian turned towards his teammates, punching his fist in the air and the entire squad run across the court, jumping in joy.

"The Indian badminton team has scripted history! The entire nation is elated by India winning the Thomas Cup! Congratulations to our accomplished team and best wishes to them for their future endeavours. This win will motivate so many upcoming sportspersons," Prime Minister Narendra Modi tweeted.

The Indian badminton team has scripted history! The entire nation is elated by India winning the Thomas Cup! Congratulations to our accomplished team and best wishes to them for their future endeavours. This win will motivate so many upcoming sportspersons.

Here are some more reactions from esteemed personalities

This day will be etched in the sporting memory of every Indian.

With this feat, our boys have captured the imagination of the entire nation

Congratulate #TeamIndia for their historic win in men's Badminton in the Thomas Cup.

A real inspiration for so many young Indians.

Heartiest congratulations to our champions! pic.twitter.com/1X2yP8RUsB

India scripted a spectacular 3-0 victory over 14-time champions Indonesia in the Thomas Cup final in Bangkok on Sunday.

India's extraordinary feat of winning the Thomas Cup with successive victories over Malaysia, Denmark and Indonesia in the play-offs called for a relaxation of rules," said Thakur in a statement.

"It is with pride that I announce the award of Rs 1 crore to the team that Indians so much joy this weekend.

Thakur complimented the players, coaches and support staff of the Indian team for the historic triumph.

Kidambi Srikanth and HS Prannoy kept a clean slate by winning each time they stepped on court. The doubles combination of SatwiksairakjRankireddy and Chirag Shetty raised the bar to win decisive points in five of the six matches, including all three in the knockout stage," he said.

"Lakshya Sen showed nerves of steel in winning the opening match against Indonesia. I am sure that doubles combination of MR Arjun and Dhruv Kapila ad Krishna Prasad Garaga and Panjala Vishnuvardhan Goud as well as Priyanshu Rajawat will have gained immensely by being part of this historic campaign."

The Sports Ministry said it contributed to the unprecedented success of the team by providing the players training and competition support.

"A 10-week National Camp starting January helped raise fitness levels of the players. The support to engage Mathias Boe as coach to assist the doubles combinations has been significant as well," the statement added.

"Over the past four years, the Ministry has extended funding worth Rs 67.19 crore to the Indian badminton players towards training and competition, including salaries of foreign and Indian coaches. "And in the past year alone, the Ministry has supported as many as 14 international exposure trips at a cost of Rs 4.50 crore.