Test cancelled in 13 places on Wednesday, aspirants flay 'experiment with our careers and academic lives' 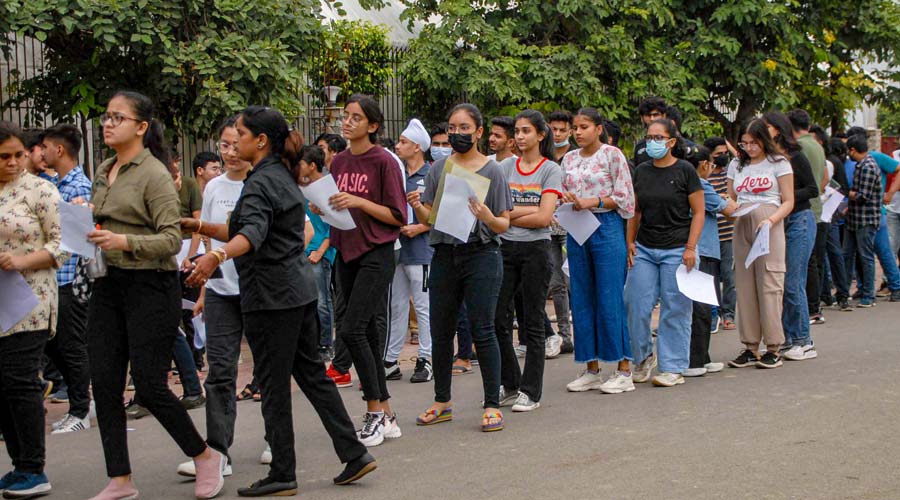 Change in centres at the last moment, far off centres and no clarity on retest options -- students on the second day of CUET's fourth phase were a worried lot.

The first shift exam was held on Thursday. The exam was cancelled at 13 centres on Wednesday following technical glitches affecting over 8,600 candidates, reports PTI.

"My intimation slip mentioned my chosen city as the exam centre city. However, when I got the admit card, I got a centre which is 150 km away and the entry closes at 8.30 am. I have been trying to reach the NTA but no luck yet," said a CUET aspirant Neha Singhal.

Another aspirant, Anjali Mishra, said, "Till yesterday afternoon, my admit card showed a different centre and today it is a different centre. I had no intimation if my centre was changed last minute and have no clue whether I would get an option for retest".

The University Grants Commission (UGC) had announced that the candidates affected on Wednesday will get a chance for retest on August 25.

The CUET is the common gateway for undergraduate admissions to all central universities. A total of 3.6 lakh candidates are eligible to appear for the fourth phase scheduled from August 17 to August 20.

The exam for additional 11,000 candidates, who were to appear in the fourth phase from August 17-20, has been postponed to August 30 to accommodate their choice of city for centre.

However, now the schedule has been further deferred and the exam has been split into six phases. The second phase of CUET was marred by glitches prompting the agency to cancel the exam at various centres.

UGC Chief Jagadesh Kumar had said the exam was cancelled at various centres following indications and reports of "sabotage". The exam in second and third phases was also cancelled at centres in Kerala and Itanagar due to rains and landslides.

On Wednesday's cancellations, UGC chairman Jagadesh Kumar said, "Due to some unavoidable technical reasons, examinations scheduled for today (Wednesday) were cancelled in 13 centres in Shift 1 and Shift 2. A total of 8,693 candidates were affected out of 1.45 lakh candidates. All the affected candidates will get a chance for a retest on August 25,”

Eight centres where the exam was cancelled are in Delhi, two each in Varanasi and Bihar, and one in Faridabad. Students from the centres in Delhi including Guru Hargobind Institute of Management and Information Technology in Delhi, Asia Pacific Institute in Jasola (Delhi) AIS Assessment Zone, Aakash International Senior Secondary School in Delhi's Nangloi and Vivekananda Institute of Professional Studies in Pitampura, claimed they were asked to go back citing technical glitches and server problems.

Some students also claimed that their exam started at least two hours later than the scheduled time. Devyani, who had travelled to Pitampura for her CUET, said, “We waited for two hours for the exam to begin in the first shift. Some of the students were also sent back citing technical glitches.”

Another student who did not wish to be identified said, “It  is a total mess. The fourth phase is being conducted and the exam cancellations are still going on. Such an experiment with our careers and academic lives.”