After taking on itself the responsibility to broker a possible settlement, a bench headed by the CJI listed the matter for urgent hearing on Thursday 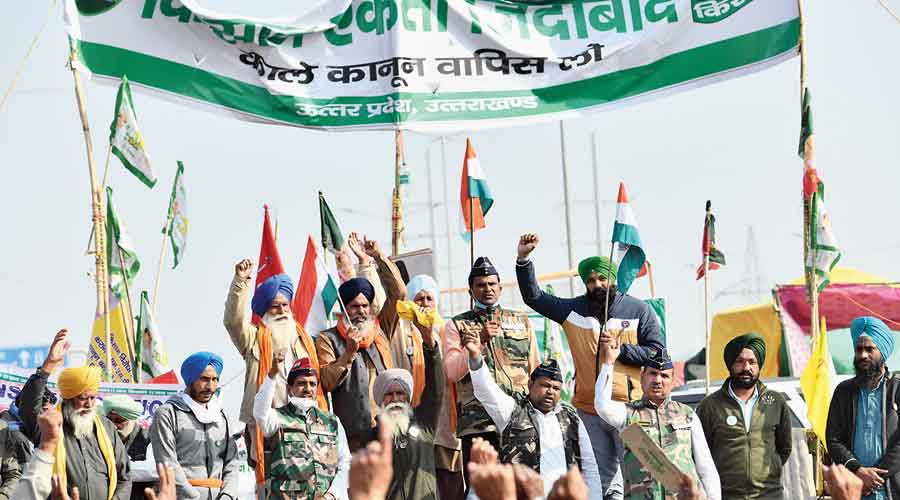 The Supreme Court on Wednesday decided to form a committee to resolve the farmers’ agitation, saying the government’s negotiations would “again fail” and the dispute would “soon become a national issue” if allowed to fester.

After taking on itself the responsibility to broker a possible settlement, a bench headed by Chief Justice of India S.A. Bobde listed the matter for urgent hearing on Thursday. It issued notices to the Centre and eight farmers’ organisations.

Earlier, when solicitor-general Tushar Mehta suggested that senior ministers were holding talks “regularly” and insinuated that the farmers’ stand was opaque, Justice Bobde cut him short.

“Your talks will again fail…. It seems the government may not be able to work out a solution. The issue will soon become a national issue,” he said.

Tens of thousands of farmers have besieged Delhi’s borders in protest against three new farm laws that they say would deprive them of the minimum support price and leave them to be exploited by big companies.

Other farmers’ organisations can also apply to be impleaded in the matter.

While Sharma has sought eviction of the farmers massed on Delhi’s borders citing the hardship to commuters, Mani has requested quashing of the new farm laws as illegal and an immediate resolution of the dispute.

Justice Bobde told Mehta, who was appearing for the Centre, that the petitions were “ill-conceived”, yet the court would like to constitute a committee as the talks held by the government so far had failed.

“The petitions seem to be ill-conceived. The only party before us is you (the Centre) — who has blocked the road is you, (the) government,” Justice Bobde remarked in a lighter vein.

Mehta said it was not the government but the farmers who had blocked the roads.

“We have been holding talks regularly, but their (agitators’) approach is ‘either repeal the act or don’t repeal it’. It is either yes or no,” he said.

“The ministers of agriculture, home and other senior ministers had discussed with them but they have turned their backs on us.”

While the government has offered to amend the contentious laws, the farmers have stood firm on their demand for wholesale repeal.

Justice Bobde, saying the talks were likely to fail again, added: “Mr Mehta, what we are planning to do is form a committee to resolve the issue. It will have members from the farmers’ organisations and government of India. There can be representations from others….”

To a query from the bench, Mehta said that as far as he knew, the Bharatiya Kisan Union (BKU) was at the forefront of the protests.

The court asked him to furnish details of the various groups involved in the agitation so that notices could be issued to them. Mehta then furnished a list of organisations.

Petitioner Sharma, the law student, has argued that blocking public roads is illegal and violates the recent Supreme Court judgment relating to the Shaheen Bagh protest in Delhi against the new citizenship regime.

The apex court had ruled that protests that block roads are illegal and such demonstrations can be held only at designated sites.

Farmers firm on call for repeal