Rhea steps out of Mumbai jail after almost a month 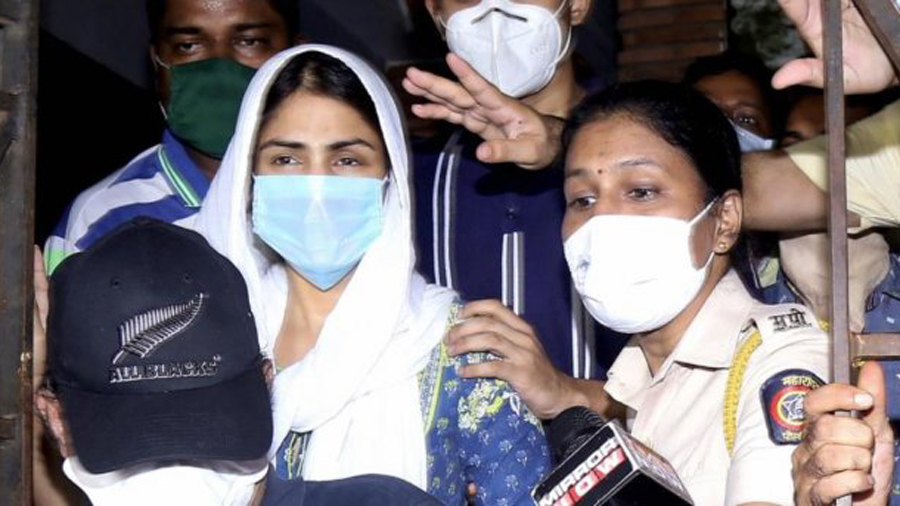 After spending 28 days in prison, actor Rhea Chakraborty, arrested in a drugs case related to her boyfriend Sushant Singh Rajput's death, was released on bail on Wednesday.

Rhea stepped out of the Byculla prison here around 5.30 pm amid heavy police deployment, an official said.

A police vehicle escorted her car as a large number of media persons had gathered outside the prison.

Earlier in the day, the Bombay High Court granted her bail but rejected her brother Showik Chkraborty's bail plea.

A bench of Justice Sarang Kotwal also granted bail to Rajput's aides Dipesh Sawant and Samuel Miranda, but rejected the bail plea of Rhea Chakraborty's brother Showik Chakraborty, who is also an accused in the case.

Rhea Chakraborty, her brother and the other accused were arrested last month by the Narcotics Control Bureau (NCB) in connection with its probe into the drugs angle related to the case of Rajput's death.

The HC, while granting bail to Rhea Chakraborty and two others, directed them to deposit their passports with the NCB and not to leave the country without permission of the special NDPS court.

The HC asked Rhea to deposit a personal bond of Rs 1 lakh and said she must visit the nearest police station at 11 am for the first 10 days after being released from judicial custody.

It directed her not to leave Mumbai without the NCB's permission and to not tamper with evidence while out on bail.

The HC also directed Rhea to visit the NCB office at 11 am on the first day of every month for next six months.

All those who have been granted bail, including Rhea, will also have to seek permission of the NCB's investigating officer to go out of Mumbai, the court said.

Rhea and her brother had approached the HC after their bail pleas were rejected by a special NDPS court here last month.

Justice Sarang Kotwal said in his judgement that he had dealt with extensive questions on law vis-a-vis the Narcotic Drugs and Psychotropic Substances (NDPS) Act during the arguments.

He also refused to accept the NCB's request for a stay on his order to allow the agency to challenge the order.

"I have already imposed very stringent conditions in the bail. If your appeal is accepted and the bail order is stayed then what prejudice will be caused to you?" the judge asked the NCB.

Rhea Chakraborty's lawyer Satish Maneshinde said they were are delighted by the high court order.

"Truth and justice have prevailed and ultimately the submissions on facts and law have been accepted by Justice Sarang V Kotwal," he said.

The arrest and custody of Rhea was "totally unwarranted and beyond the reach of law", Maneshinde said.

"The hounding and witch-hunt by three central agencies--the CBI, ED and NCB --of Rhea should come to an end. We remain committed to truth," he said.

Rajput, 34, was found hanging at his apartment in suburban Bandra on June 14 this year.

Following extensive hearings last week, the HC had closed all arguments and reserved its verdict on the pleas.