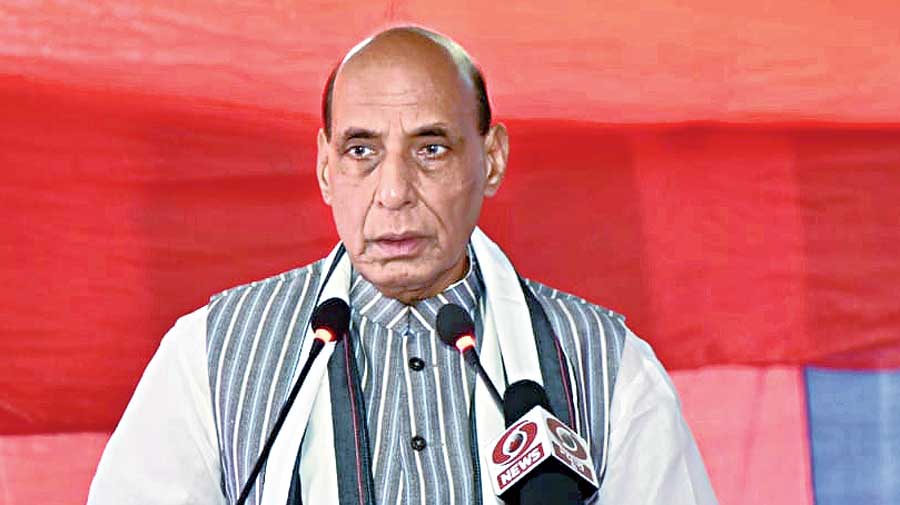 Rajnath Singh speaks at the programme at Kimin in Arunachal Pradesh on Thursday
Telegraph picture
Umanand Jaiswal   |   Guwahati   |   Published 18.06.21, 12:54 AM

Union defence minister Rajnath Singh on Thursday inaugurated 12 roads, of which 10 are in frontier Arunachal Pradesh, that have “strategic and socio-economic” importance, two days after the first anniversary of the Galwan Valley clash with Chinese troops in which 20 Indian soldiers were killed in eastern Ladakh.

The remaining two roads are in Ladakh and Jammu and Kashmir, which like Arunachal Pradesh share border with China that has been engaged in long-drawn territorial disputes with India. China considers Arunachal Pradesh to be an extension of south Tibet.

Addressing the inaugural programme at Kimin in Papum Pare district, Rajnath said the strategic roads built by the Border Roads Organisation (BRO) would be helpful in fulfilling the “needs of our armed forces and transporting necessities like medicines and ration to remote areas”, adding that these projects were part of the Centre’s “Act East Policy” under which special emphasis is being laid on the overall development of the border areas.

Rajnath paid tribute to the soldiers who showed exemplary courage during the Galwan Valley clash and made the “supreme sacrifice in the service of the nation” but also warned of befitting reply in response to aggression.

Rajnath described India as a “priest” of world peace but added that any serious disturbance to tranquillity in the border areas would have adverse implications.

Amid ongoing efforts with China for the disengagement of troops in the Ladakh sector, India has been trying to spruce up its infrastructure along the border for better movement of troops and weapons during exigencies.

The roads inaugurated on Thursday have been constructed under the Arunank, Vartak, Brahmank, Udayak, Himank and Sampark projects of the BRO, which has been lauded for its efforts to build infrastructure on very challenging terrain.

The roads, Rajnath said, hold strategic and socio-economic importance, as they will play an important role in strengthening national security as well as promoting development of the Northeast.

Rajnath reiterated the resolve of the Narendra Modi government for the development of the Northeast, describing the region as the gateway to not only the overall development of the country but also to the nation’s relations with East Asian countries.

The defence minister also touched upon some of the major reforms undertaken by the Centre, including appointment of the chief of defence staff, measures to boost self-reliance in defence manufacturing and the corporatisation of the Ordnance Factory Board.

“These reforms are proving to be a game changer in the military’s preparedness in the rapidly changing times.… We are actively working towards making India a defence manufacturing hub. Self-reliance in defence production will reduce our dependence on imports, increase exports and strengthen our economy,” Rajnath said.