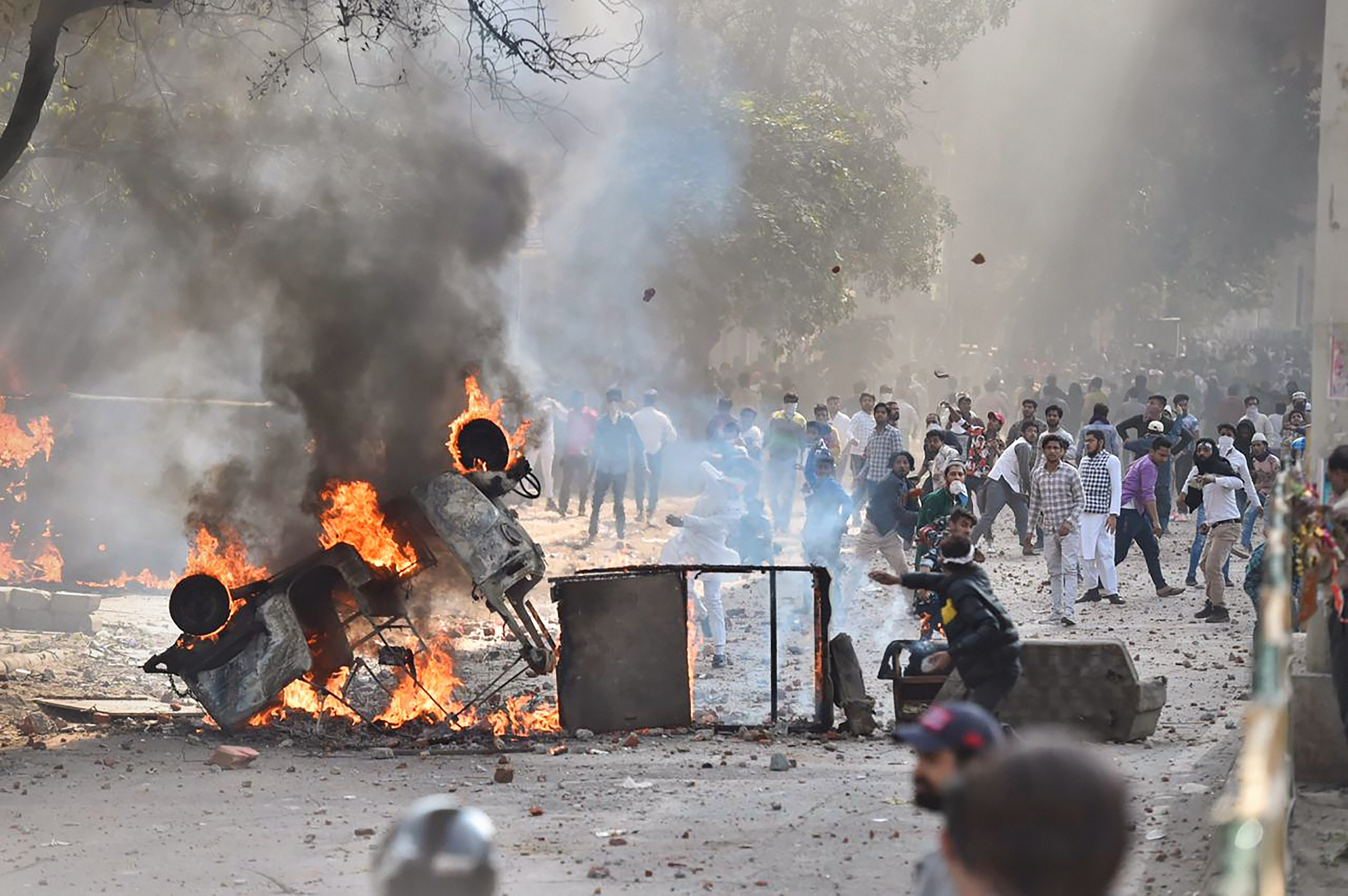 Vehicles set ablaze as protesters throw brick-bats during clashes between a group of anti-CAA protestors and supporters of the Citizenship (Amendment) Act, at Jafrabad in northeast Delhi, Monday, February 24, 2020
PTI
The Telegraph And PTI   |   New Delhi   |   Published 24.02.20, 10:07 AM

A Delhi Police head constable was killed during clashes in northeast Delhi, a senior officer informed. Ratan Lal was attached to the office of the Assistant Commissioner of Police, Gokulpuri, he said.

Violence broke out at Bhajanpura, Maujpur and Jaffrabad neighbourhoods of northeast Delhi on Monday, with stone pelting between pro and anti CAA groups.

Several police personnel have been injured in the clashes. Deputy Commissioner of Police, Shahdara, Amit Sharma was injured in northeast Delhi, a senior official said. According to the official, Sharma suffered injuries to his head and hand. He was hospitalised and is doing fine.

US President Donald Trump is scheduled to reach the national capital on Monday evening, though his routes and places of visit are far from the clash sites at present.

Videos that have emerged from the clash sites show an autorickshaw on fire, while others show buildings burning. In another video a man dressed in a red shirt can be seen running towards an unarmed Delhi Police officer waving what appears to be a gun; he approaches the cop before turning and firing into the air.

Tension escalated in northeast Delhi with protesters torching at least two houses and a fire tender in the Jaffrabad and Maujpur areas, where pro and anti-CAA groups clashed for the second consecutive day on Monday and hurled stones at each other.

Violence was also reported from the Chandbagh area in Jaffrabad. Police fired tear gas shells and also resorted to lathicharge to disperse the protesters. According to officials, a fire tender was damaged by the protesters after it responded to a fire call in the area.

Videos from the area which circulated on Instagram and Twitter showed hundreds of protesters gathered on roads in the area, some with Indian flags, trying to make a human chain amid heavy police presence, in order to block pro-CAA agitators. The videos also showed columns of smoke  emerging from the remnants of vehicles and other goods set on fire.

Chandbagh situation is getting worse. Vehicles set ablaze by Pro CAA RSS GOONS, 1petrol pump is almost about to catch fire. Stone pelting, tear gas firing everything is going on... Via @rohit_lohia02

'Very distressing news regarding disturbance of peace and harmony in parts of Delhi coming in. I sincerely urge Hon’ble LG n Hon'ble Union Home Minister to restore law and order and ensure that peace and harmony is maintained. Nobody should be allowed to orchestrate flagrations,' Kejriwal tweeted.

Very distressing news regarding disturbance of peace and harmony in parts of Delhi coming in.
I sincerely urge Hon’ble LG n Hon'ble Union Home Minister to restore law and order n ensure that peace and harmony is maintained. Nobody should be allowed to orchestrate flagrations.

Swaraj Abhiyan leader and academic Yogendra Yadav too made an appeal to the Delhi Police commissioner to take stock of the situation in Chandbagh area where he feared an “escalation of violence”.

Urgent: All reports from Chandbagh suggest the communal conflagration is very serious.
Need for IMMEDIATE action by @CPDelhi in North East, especially Chand Bagh, to prevent loss of life and further escalation of violence.@DelhiPolice @LGGovDelhi

Delhi minister and Babarpur MLA Gopal Rai on Monday urged the people in the area to maintain peace in the wake of clashes over the new citizenship law, saying some people were purposely trying to disturb the atmosphere. Rai said that he had spoken to Delhi LG Anil Baijal and was assured that more police personnel would be deployed to bring the situation under control.

'With folded hands, I request people in Babarpur Assembly to maintain peace. Some people are purposely trying to spoil the atmosphere. I have spoken to Delhi LG and he has assured me that more policemen will be deployed to bring the situation under control,' Rai said in a tweet.

Entry & exit of Jaffrabad and Maujpur-Babarpur are closed. Trains will not be halting at these stations.

A pro-CAAmob clashed with the anti-CAA protesters gathered at the Jaffarabad metrostation on Sunday afternoon, demanding they vacate the area for publicconvenience.A number ofvehicles were set on fire during the clash on old Seelampur road which leads toJaffarabad, Chandbagh and Kardampuri. Northeast Delhi has been witnessingseveral anti-CAA protests within a radius of about 8-10 km. One of them atSeelampur took a new turn last week when women of the area congregated underthe Jaffarabad metro station on Pink Line in huge numbers  to organize aShaheen Bagh-like sit-in.Situationturned violent on Sunday afternoon when BJP leader Kapil Mishra decided to takea rally in favour of the citizenship Act with a horde of his supporters andgave an ultimatum to the people of the area to call off their protests andvacate the area.

The two groups clashed after this and pelted stones at each other as the police intervened with force and tear gas.A video shared by the leader known for making communal remarks, showed him threatening protesters to vacate the area. He said he will exercise restrain till the US President Donald Trump’s visit to India is over, after which they (his people) “will come out on the road and will not listen to you (the police) too”.

Suspicion after provoked clash in Delhi