In the 2019 elections, a third of eligible voters did not vote, and most of these are believed to be migrant workers 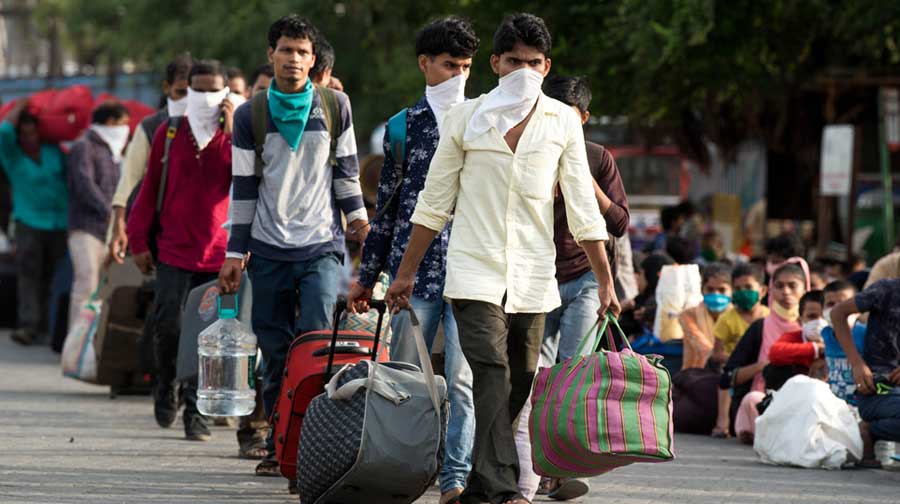 Three former chief election commissioners (CECs) have highlighted the challenges of extending voting facilities to migrants within and outside India.

In the 2019 polls, a third of eligible voters did not vote, and most of these are believed to be migrant workers.

The webinar by poll watchdog Association for Democratic Reforms (ADR) on “Voting Facilities for Migrant Workers” came almost two months after the Election Commission of India (EC) told the Union law ministry that a mere change in the rules by the government, which would not require an amendment by Parliament, could extend electronically transferable postal ballots to overseas voters.

More than 25,000 such voters, mostly from northern Kerala, returned home and voted in the 2019 Lok Sabha polls. More than 1.36 crore Indian citizens live abroad, mostly in the Persian Gulf region.

Former CEC S.Y. Quraishi questioned the double standard in allowing overseas migrants to vote in the countries they live in, while restricting the facility of voting away from one’s constituency only to the armed forces in India. However, he also pointed out the problems of allowing such a facility in India and abroad.

“Migrants within the country are not disenfranchised. They are supposed to be registered where they are normally resident. The option to be registered at home (town), while living here (place of work) actually does not exist. It is a different matter that the EC has not been very strict about it,” said Quraishi.

“Vote indicates political power. Where do I want political power? In my village or my workplace.… If workers from Bihar or Uttar Pradesh were not allowed to register in Delhi, no government would ever bother about them... no unauthorised colonies would be regularised. It is up to the voter to choose where he or she wants that particular power,” he added.

Quraishi went on: “In Dubai or Kuwait or New York or Paris, we cannot ensure the model code of conduct.… We don’t have control over speech. You are giving them more options than domestic migrants.”

India’s 22nd CEC, O.P. Rawat, said: “There is no accepted legal definition of migrant workers anywhere in the statute. Who will be taken as a migrant worker for enrolling and voting? We found that the labour ministry and other stakeholders concerned had no say on this major issue. Once such a definition is available, we can devise means for their voting wherever they are, if they choose so.”

He added: “In many places they may be under the clutches of employers. They may be compelled by this person to vote according to his or her wishes. The EC would have to ensure that when identification takes place, somebody is present to ensure that the same person identified as the voter votes according to their free will.”

Activists such as Gujarat-based Teesta Setalvad asked the EC to use rosters that are mandated under the Inter-State Migrant Workmen Act to enrol voters.

Rajiv Khandelwal, the founder of the Aajeevika Bureau, alleged that the apathy of authorities in Gujarat over the recent deaths of 15 Rajasthani migrant workers in Surat in a traffic collision stemmed from the absence of political inclusion.

“There was absolutely no local support (for the families of the deceased) except the local villagers. No political representation, no bureaucracy, no one to immediately be available at a time like this. It took the longest time to even identify the workers as they were not registered and had no formal proof of presence in the city. It took MLAs and sarpanches from Banaswada (Rajasthan) to show up in Surat to bring the bodies back.”

He said most workers want voting rights in their place of work if they could also doubly retain their vote back home.

Former CEC Nasim Zaidi praised the EC for exploring alternative methods of voting. “The only possible method (to allow domestic migrants to vote in their native places) is electronic postal ballots. The concept of national polling centres and district absentee voter centres (where this type of voting can be facilitated) is taking place in the EC. Migrant resident Indians (MRIs) need to be identifiable, distinct, countable and registered at the original place of residence and unable to travel back to vote.”

ADR founder Jagdeep Chhokar said: “Why should the EC spend so much time, energy and effort to provide these facilities to NRIs without doing even a fraction of that for the MRIs?… I am aghast that the definition is a problem and we don’t know who has to define. That only shows that we don’t want to define.”

Ashwani Kumar, professor of public policy at Mumbai’s Tata Institute of Social Sciences, pointed out that the number of migrant workers in the 2011 Census was 450 million and have been estimated to have risen to 580 million this year.

Different studies show that 60 to 83 per cent failed to cast their vote in some election after moving from their hometowns, and 41 per cent of entries in Delhi’s electoral roll — considered the most accurate —  has errors.

“There is a deep anti-migrant apathy especially at the BLO (booth-level officer) level,” he said.