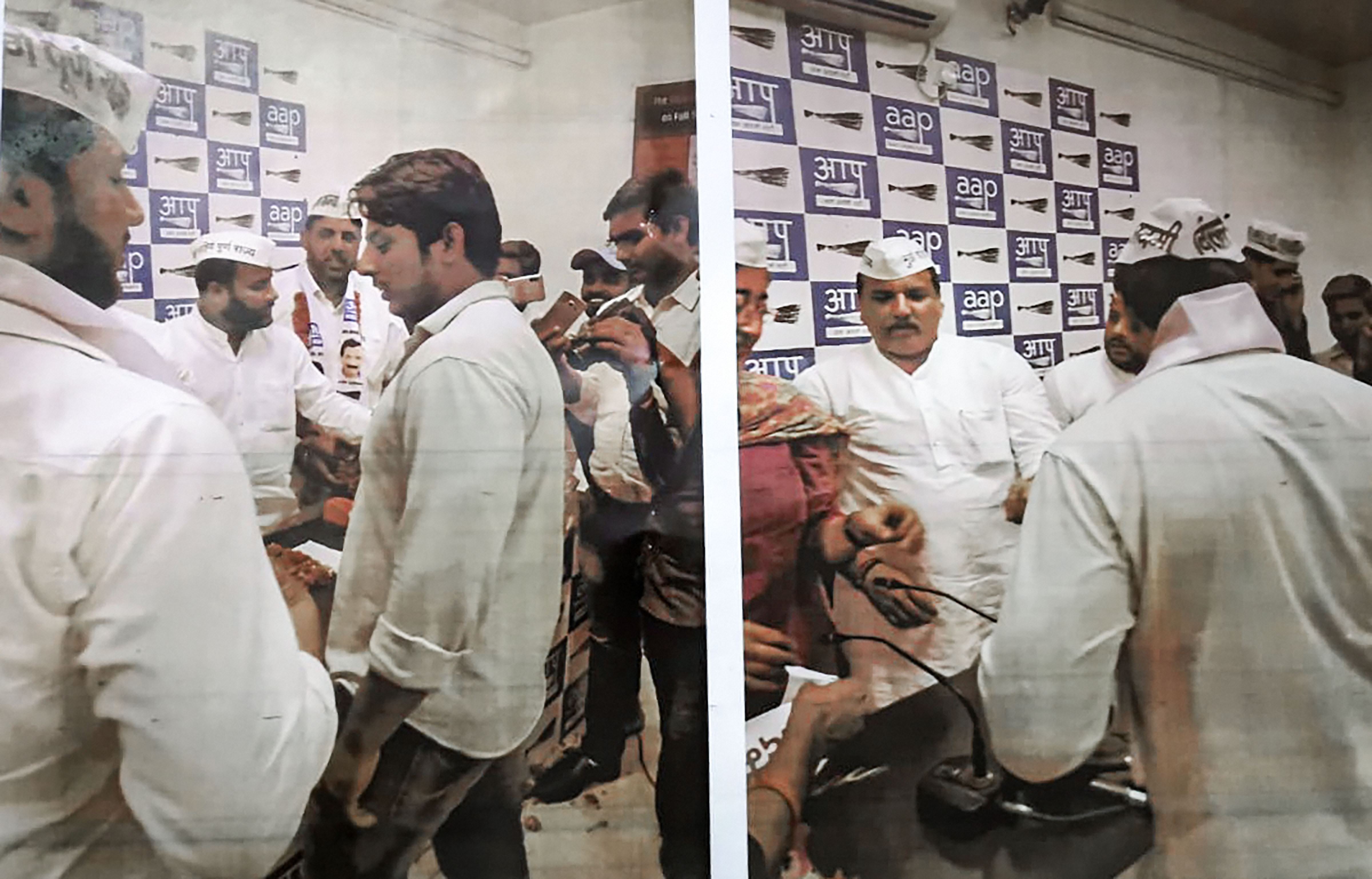 Days before Delhi goes to polls on February 8, police have claimed that Shaheen Bagh shooter Kapil Baisala is a member of the Aam Aadmi Party and said he joined the party in early 2019 along with his father.

Police said it had photos of Baisala purportedly joining AAP along with his father Gaje Singh last year.

Kapil Baisala's uncle Fatesh Singh told PTI, 'I have no idea where these photographs are circulating from. My nephew Kapil had no association with any political party nor does any other member from the family. My brother, Gaje Singh, (Baisala's father) fought assembly elections in 2008 on a Bahujan Samaj Party ticket and lost. After that no one from our family had any links with any political party.'

Singh added that Baisala also doesn't have friends associated with the AAP or any other political party.

Gaje had also contested the 2012 civic body polls from the BSP, the police said.

After the police identified Baisala as an AAP worker, BJP chief J. P. Nadda on Tuesday slammed Delhi chief minister Arvind Kejriwal and said it has exposed the party and it chief, who were playing with the country's security.

The Aam Aadmi Party hit back, questioning the police investigation.

In a series of tweets, Nadda said people of the country and Delhi today have seen the 'dirty face' of AAP.

'For political longing, Kejriwal and his people even sold the security of the country. Earlier, Kejriwal used to insult the Army and advocate terrorists, but today relations with those who carry out their terrorist activities came to light,' he said.

Nadda said he wanted to make it clear to Kejriwal that this country is bigger than any election, any government, and 'this nation will not forgive those who play with its security. Kejriwal and his entire team have been exposed. The people of Delhi will give a befitting reply'.

He claimed the entire country has seen 'photos of Imam Hussain, the MLA and former minister of the Delhi government, with a radical terrorist organisation, PFI'.

AAP's Rajya Sabha MP Sanjay Singh alleged that photos which were part of investigation were leaked to the BJP. He also said the party will approach the Election Commission to raise this issue, which has cropped up four days before the polling date.

'On whose instance, the police is giving statement? How did the photos which were part of the investigation reach the BJP? Before the news came out, Manoj Tiwari in the morning stated that the accused was from AAP. How did Manoj Tiwari get this news,' Singh questioned in a press conference.

Union minister and BJP's in-charge for the Delhi polls, Prakash Javadekar, in a press conference alleged that 'their (AAP's) designs are very clear from the beginning and they are trying every trick'.

The whole conspiracy of AAP is to 'divide society, cause fear in a community and create a vote bank,' he charged.

Javadekar also claimed that photos of Baisala were recovered by police from his mobile phone although they were erased.

He also claimed that Baisala and his father were welcomed by Sanjay Singh at their joining of AAP.

'This proves AAP misleads youth and pushes them on the wrong path. AAP's strategy is to divide two communities, they want to instigate riots in Delhi,' Javadekar alleged.

He further alleged that AAP leader Sanjay Singh had said violence would take place in Delhi. Their 'conspiracy has been exposed by Delhi Police,' he claimed.

'We condemn this politics of AAP,' he said.

Javadekar also claimed this was 'not an isolated incident' as AAP member Amanatullah Khan made a 'very provocative speech' and the party supported Shaheen Bagh and did not give permission for the prosecution of members of the 'tukde-tukde gang'.

He hinted the BJP could approach the Election Commission against AAP over the issue.

He was overpowered by the police and later arrested.

In the pictures released by the police, it was seen that he and his father joined the party in the presence of Atishi Marlena, Sanjay Singh and other leaders, sources said.

The police said on Thursday, Baisala, along with his friend Sarthak Larolla, went to Shaheen Bagh from his village on a bike.

'Baisala was not comfortable on the bike as he had hidden the pistol near his waist. They entered the hospital's parking where he adjusted the pistol, used the washroom and headed towards Shaheen Bagh,' the senior official added.

When they reached the protest site, Larolla left the spot with the motorcycle and Baisala's mobile phone. Later, Baisala fired two rounds in the air and was apprehended. The weapon was recovered from near the spot, the police said.