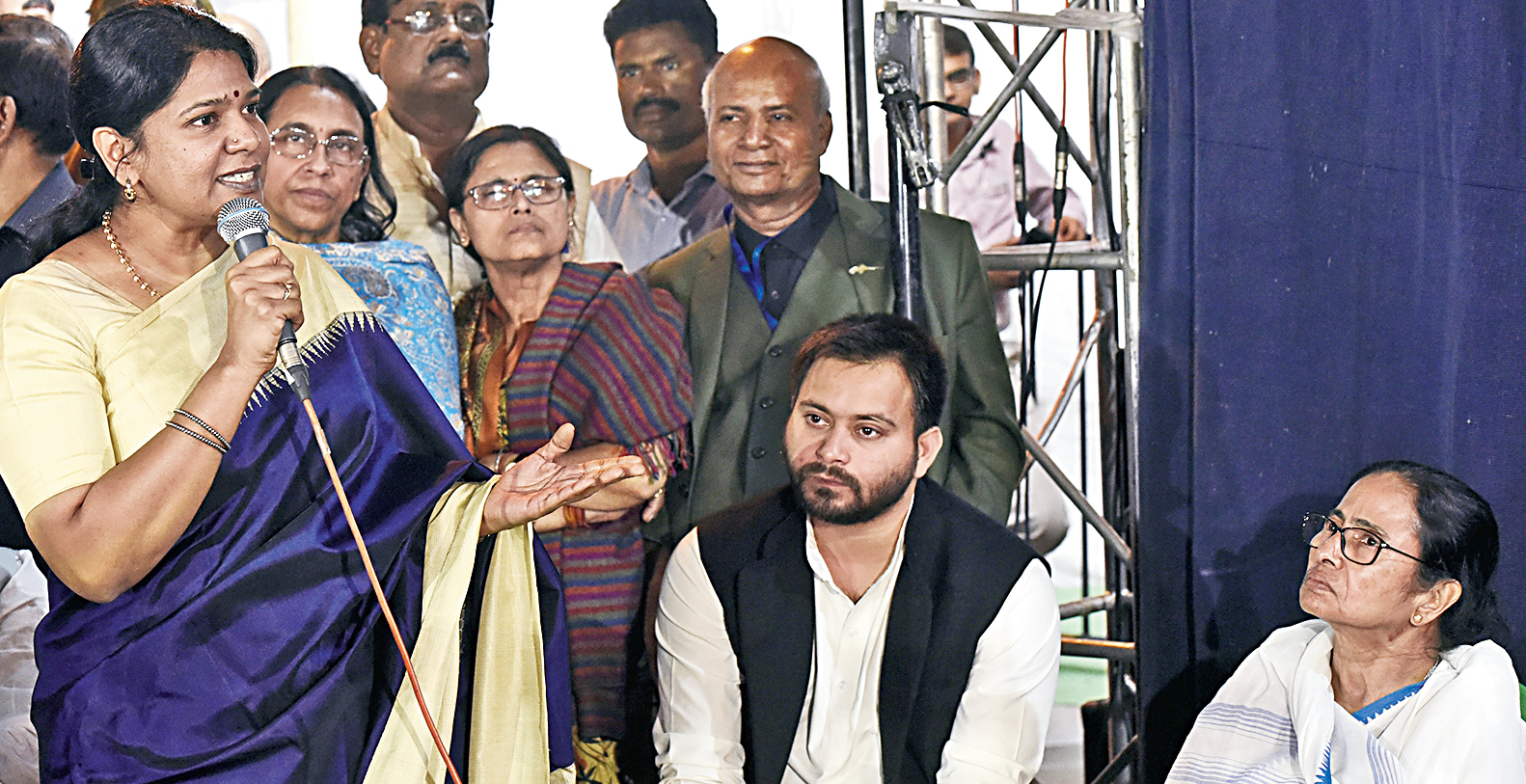 Opposition parties on Monday rallied around the Trinamul Congress inside Parliament, carrying forward the spontaneous support leaders across the country had last night extended to Bengal chief minister Mamata Banerjee after a CBI team reached the Calcutta police commissioner’s doorstep without warning.

Trinamul took the lead in both Houses — protesting what they called an attack on the “federal structure” — and the Opposition stood with it.

But Trinamul’s bid to raise the issue at a closed-door pre-scheduled Opposition meeting later in the evening did not bear fruit. Most party leaders wanted to stay focused on the memorandum they were to submit to the Election Commission.

The future course of action as a collective will, however, be strategised only after the Supreme Court hears the case on Tuesday.

On the BJP’s allegation that the Opposition unity on Sunday’s police-CBI standoff was nothing but a “coalition of the corrupt”, the RJD’s Manoj Jha pointed out that Indira Gandhi had used a similar formulation when different parties tried to come together against her in the 1970s.

Trinamul thanked all the Opposition leaders who had been quick to express solidarity with Mamata in her face-off with the Centre. Many of them, including Congress president Rahul Gandhi and BSP boss Mayawati, had called up the Trinamul chief late on Sunday night.

“Between 8pm and 11pm, many leaders called up Mamata-Di,” Trinamul’s Derek O’Brien said.

“I spoke with Mamata Di tonight and told her we stand shoulder to shoulder with her,” Rahul had tweeted after speaking to the chief minister. “The happenings in Bengal are a part of the unrelenting attack on India’s institutions by Mr Modi & the BJP. The entire opposition will stand together & defeat these fascist forces.”

The Congress did not appear overly bothered by the BJP digging out Rahul’s tweets of 2014 criticising Mamata over the Saradha scam.

“Both parties are fighting each other in Bengal. But, this is a larger issue of constitutional propriety,” a Congress member said.

The BJP, he added, has a lot to answer for, especially the party’s decision to take into its fold Mukul Roy and Himanta Biswa Sarma who have both been questioned in connection with the scam.

Apart from calling up Mamata, many of the Opposition leaders also took to social media to record their criticism of the Narendra Modi government over what they saw as “blatant misuse” of the CBI in Bengal to “intimidate” the Opposition and “settle political scores”.

The Left, however, worked itself into a corner, with the CPM loath to come out in solidarity with its arch rival.

A politburo statement dwelt at length on the scam and the need to nab the guilty, dedicating just a paragraph to the issue that was bothering others in the Opposition camp.

“The manner in which the Modi government has now moved, given its record of authoritarian assaults against non-BJP state governments and constitutional authorities, including CBI, smacks of political motivation. The response of the TMC government and the Chief Minister, given their record of murder of democracy in Bengal, is also politically motivated,” it said.

The CPM, which has always maintained that the BJP and Trinamul were two sides of the same coin, is of the view that Sunday’s development was an indication that the BJP had decided to give up on dangling a go-slow on the probe as a carrot and, instead, go for the stick.

“We have always said that the BJP was dragging its feet on the probe to bargain with Mamata. Now that the federal front is not gaining traction, she can bring nothing to the table as far as the BJP is concerned. So, they have decided to go for the jugular,” a CPM member said.