Students of Classes III, V, VIII and X will take the written test — which will assess their competence in mathematics, social sciences, language and comprehension 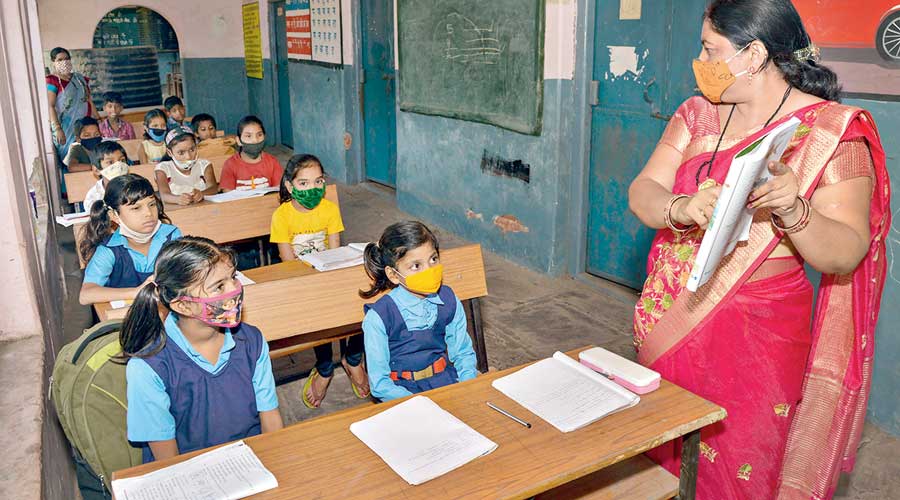 Nearly 40 lakh pupils from government and private schools will in the second week of November participate in a National Achievement Survey, which will evaluate their learning levels and assess any decline during the pandemic.

Students of Classes III, V, VIII and X will take the written, single-paper test — which will assess their competence in mathematics, social sciences, language and comprehension — on a single day.

Education ministry officials said the survey report would be expected before the next academic session.

“Several sample survey reports have come out in the past few months showing a learning loss, but their sample sizes were small. The NAS report will help us get a national picture,” a ministry official said.

Earlier this month, a sample survey by a group of educationists had found a sharp decline in learning standards among underprivileged children enrolled in Classes I to VIII. About 42 per cent rural children and 35 per cent of urban children from Classes III to V were unable to read a single word from a simple sentence.

Students from nearly 1.25 lakh of India’s 15 lakh schools will take part in the test, to be available in 22 languages including Nepali and Urdu.

The three-yearly NAS was last held in 2017, with Covid preventing it being held last year. Till now, only students of government and government-aided schools took the tests for Classes III, V and VIII, while the Class X test featured both government and private schools.

This year will be the first when students of both government and private schools will take the test for each of the four grades.

A ministry official said this year’s test would therefore show, for the first time, how children from poor families who study in the lower classes at private schools, with the government paying their fees at a rate fixed by it, were doing.

The Central Board of Secondary Education will conduct the test, while the National Council of Educational Research and Training will prepare the question papers.

The internationally esteemed competency test, Programme for International Student Assessment (PISA), has been deferred to 2022 because of the Covid situation.

The three-yearly worldwide test, conducted by the Paris-based Organisation for Economic Cooperation and Development, was to be held this year. The test assesses 15-year-olds’ competence in mathematics, reading and science.

The Centre has an agreement with the OECD for the participation of Indian students. India had, however, participated only once, in 2009, when students from Tamil Nadu and Himachal Pradesh were selected to represent the country.

India had ranked 73 out of 74 countries, finishing only above Kyrgyzstan, and did not participate in 2012, 2015 or 2018. Next year, select students from urban schools in Chandigarh and its neighbourhood will represent the country.