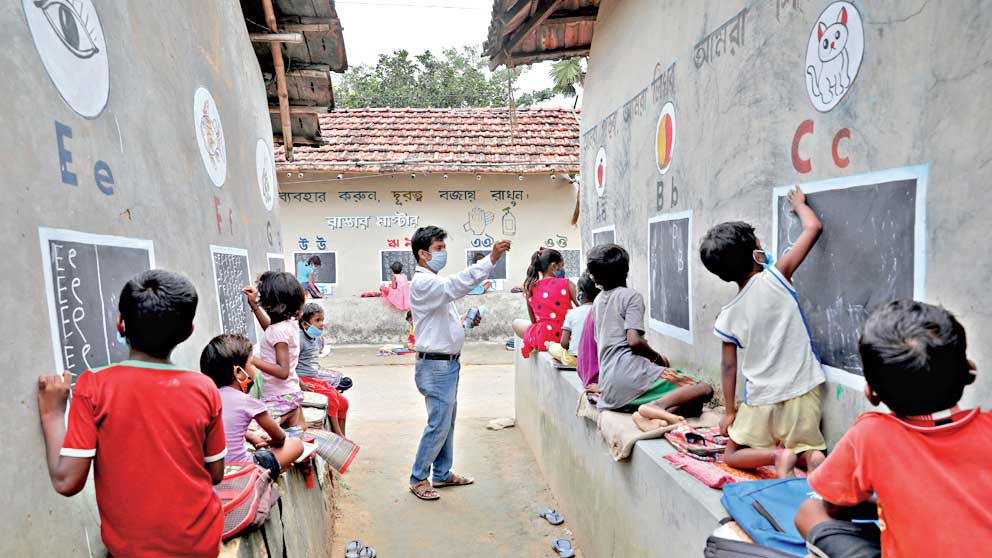 Deep Narayan Nayak, 34, a teacher, teaches children, who do not have access to internet facilities and gadgets, in an open air class outside the houses with the walls converted into black boards following the closure of their schools due to the coronavirus disease (COVID-19) outbreak, at Joba Attpara village in Paschim Bardhaman district in the eastern state of West Bengal, India, September 13, 2021.
Rupak De Chowdhuri
Samantak Das   |   Published 23.09.21, 12:22 AM

Chumki Mandal is a sparkling young girl of about 12 who lives in the southern fringes of the city with her parents, siblings, and widowed paternal grandmother. Her mother works as a domestic help in several homes and her father has a small kabariwala shop where he stores the used newspapers, magazines, plastic and glass bottles and other detritus that he collects from middle-class homes on his daily rounds, and which he then sells to sundry others who, in turn, recycle these discarded items into paper bags, plastic mats and containers and so on. Chumki’s nickname is ‘Chutki’ (‘the little one’), since she is quite a bit younger than her brother, aged about 21 or 22, who helps out in their father’s shop apart from doing odd-jobs for a local electrician. Chumki’s sister is about 18 or 19, and finished her Madhyamik (Class X board) examination (or, to be more accurate, received passing grades for the cancelled exams) this year. She has decided not to study any further, and has already started to make enquiries about getting trained as a beautician — her dream is to, one day, have a parlour of her own. Unlike her siblings, Chumki is serious about her studies, does well in the government school she attends, and hopes to become a doctor. In many ways, Chumki’s family is representative of the many millions who may not be right at the bottom of the socio-economic ladder, but whose existence is crucially dependent on things remaining more-or-less stable and predictable. In the winter of 2019-20, matters seemed to be going their way — Chumki’s father’s shop was doing well, her brother hoped to make the first down payment for a motorcycle, and they’d recently replaced the tiled roof of their house with a proper cemented one. There was even talk of buying a small refrigerator. Then Covid-19 struck and their world, and everything in it, was turned upside down.

Chumki was perhaps the worst affected. After several months of no school from March to about July last year, when online classes started the family’s only smartphone was seldom available for her. Her sister’s claim was — perhaps rightly — deemed to be greater than hers and her brother, too, felt he needed the phone more than the littlest one in the family. Fortunately, one of the households where her mother works, and from where her father collects used newspapers and other discarded materials on a regular basis, came to know of Chumki’s plight and bought her a smartphone — so she was now able to attend online classes; but the problem of poor connectivity and lack of data remained. Today, more than a year later, Chumki’s academic performance has deteriorated considerably, and she often speaks of joining her sister, without first completing Class X. Her dream of becoming a doctor seems to be fading rapidly.

The recently-released Locked Out: Emergency Report on School Education encapsulates the experiences of many Chumkis spread across 15 states and Union territories. The data presented in this short (30 pages) report make for dismal reading. Of the 1,362 children from underprivileged households — in both rural and urban areas — who formed part of the SCHOOL (School Children’s Online and Offline Learning) survey, only 8 per cent of children in rural areas and 24 per cent of urban children are studying online regularly; more distressingly, 37 per cent of rural and 19 per cent of urban children are not studying at all; and three-quarters of their parents feel that their children’s reading abilities have declined during the last 18 months. Parents, the report states, “are desperately waiting for schools to reopen. Indeed, for many of them, school education is the only hope that their children will have a better life than their own.” Calling online education a “fiction” with teachers “out of touch”, the report speaks of how literacy rates are “off the charts” and “the predicament of Dalit and Adivasi households... worse than average”. Locked Out ends by stating bluntly, “As things stand, the system seems to be heading towards ‘business as usual’ when schools reopen — this is a recipe for disaster.”

An indication of how such a disaster may be avoided is provided in another new publication, Learning Together: The Opportunity to Achieve Universal Education, which calls itself an “action oriented study conducted in West Bengal” by Shiksha Alochana, a “platform... formed in 2016 by a group of primary school teachers who [wanted to] transform their schools into active social institutions, which, apart from bringing in excellence in teaching-learning and all-round development of children, would inspire, accommodate and integrate local communities with the school.” In Learning Together, the experiences of teachers who found novel, innovative ways to reach out to deprived children during the pandemic are recorded, which, in turn, may provide clues to how formal teaching-learning can be resumed once schools reopen. Chapter Two of the study, “Alternative processes of teaching-learning during the pandemic”, records some of the ways in which teachers have been reaching out to students whilst schools remain closed. These have included in-person classes in spaces where Covid-19 protocols can be maintained; used digital tools and methods where feasible; or taken the form of creating plays, cartoons or videos that can be easily shared. Most crucially, all of these modes of connecting with students have been vitally dependent on the active participation of local communities and (usually young) volunteers. Such experiments by its members have enabled Shiksha Alochana to suggest ways and means to overcome the challenges that lie ahead, succinctly presented in Chapter Three of the study, “Challenges ahead and way forward”. These include a five-point agenda for reopening schools, starting from “Preparing the ground” to “Preparing the schools” to “Preparing for lessons” where a set of Minimum Most Essential Learning Outcomes are chalked out for Classes I through V. The study ends by reminding us that the education of our children is a collective responsibility and not something that can be left to the government alone, or allowed to be blown about by the whims and fancies of private entities. Learning Together can be seen as a kind of companion piece to Locked Out, helping us to think through the process of resuming our children’s formal schooling — not in a typically business-as-usual fashion but keeping in mind the havoc already wreaked by the pandemic, the contours of which are still not fully clear. As Sukanta Chaudhuri puts it in his magisterial Foreword to Learning Together, “We are fortunate in having a substantial body of teachers in our state who can think so big even in this most disheartening of times, and propose a practical template for reform. Let us not fail them, so that we do not fail our children and our nation.”