Navjot Sidhu lodged in Barrack No.10 of Patiala jail, didn't have dinner on first night

As Congress leader has to undergo rigorous imprisonment, he will also have to work in prison 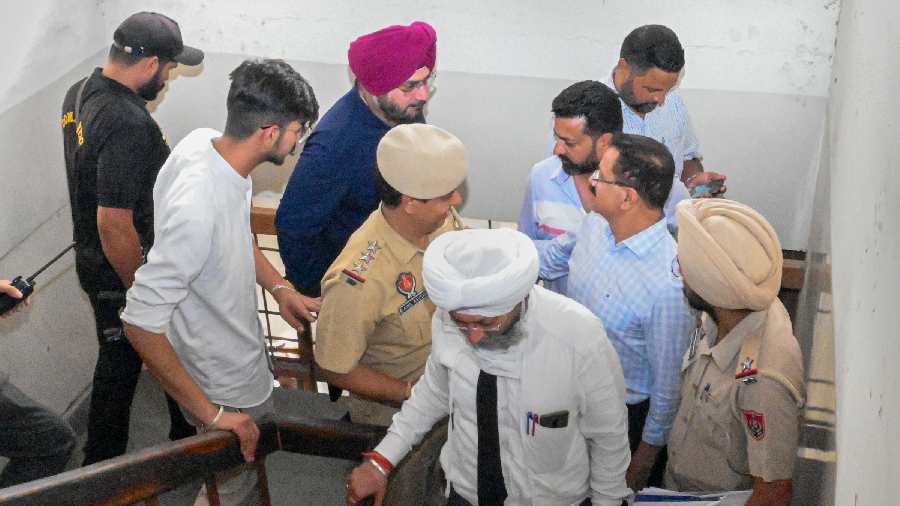 Congress leader Navjot Singh Sidhu, who has been sentenced to one-year jail term in a road-rage case, has been lodged in Barrack No.10 at the central jail here and didn't have dinner on the first night, sources said on Saturday.

Sidhu has been lodged in the barrack with four other prisoners, said the sources. He didn't have dinner as he had already taken his meal, they said, adding that the former state Congress chief is prisoner number 1,37,683.

The 58-year-old former cricketer on Friday had surrendered before a court here and later sent to the Patiala Central Jail. He was sentenced to one-year rigorous imprisonment by the Supreme Court in the 1988 road-rage case.

As Sidhu has to undergo rigorous imprisonment, he will also have to work in the prison.

Another high-profile prisoner lodged in jail here in connection with a drug case is Shiromani Akali Dal leader Bikram Singh Majithia, who had contested against Sidhu from Amritsar East. Sidhu and Majithia had both lost the elections to AAP's Jeevan Jyot Kaur.

The SC had on Thursday sentenced Sidhu to one-year rigorous imprisonment in the 34-year-old case, saying any undue sympathy in imposing an inadequate sentence would do more harm to the justice system and undermine the public confidence in the efficacy of law.

A 65-year-old man, Gurnam Singh, had died in the incident.

When reporters sought Sidhu's reaction to the verdict on Thursday, he had declined to comment. However, he had later tweeted to say he "will submit to the majesty of the law".

Though the apex court had in May 2018 held Sidhu guilty of the offence of "voluntarily causing hurt" to the man, it had spared him a jail term and imposed a fine of Rs 1,000.

Gurnam Singh's family had sought a review of the judgment, which was allowed by the SC.

Sidhu, a former BJP MP, had switched over to the Congress ahead of the 2017 assembly polls.

Sidhu began his political innings in 2004, contesting the Lok Sabha elections on a BJP ticket from Amritsar, where he shifted his base from Patiala. He defeated Congress heavyweight R L Bhatia.

The former cricketer's relationship with the Badal family soured even though the Shiromani Akali Dal was a BJP ally then. And then he had problems with the BJP after the party fielded Arun Jaitley from Amritsar in the 2014 Lok Sabha polls.

Though he was accommodated in the Rajya Sabha later, the maverick politician quit the party to join the Congress.

Sidhu sent to jail for a year