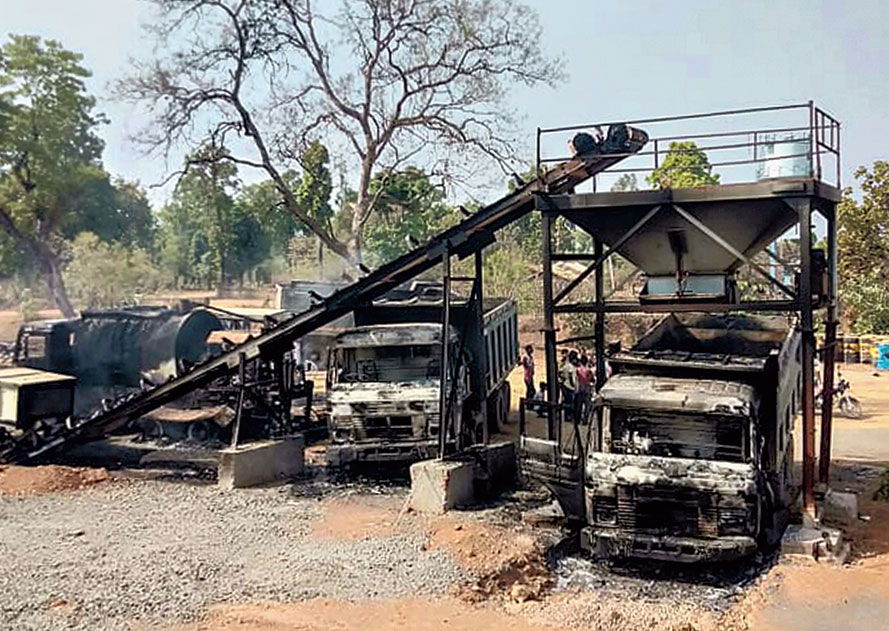 Fifteen policemen and a civilian driver were killed when a Maoist landmine targeted a security vehicle in Maharashtra’s eastern Gadchiroli district on Wednesday, the state’s foundation day, the police said.

The carnage, which comes in the middle of a general election, revived memories of the February 14 militant strike in Pulwama, Jammu and Kashmir, in which a lone suicide bomber attacked a CRPF convoy and killed 40 personnel.

The Congress alleged the Narendra Modi government had learnt no lessons from Pulwama for all its “fake chest thumping” and “tall talk” on national security and tendency to “deeply politicise” the sacrifice of jawans.

The policemen killed on Wednesday were members of Gadchiroli police’s Quick Response Team, who had been travelling to inspect a site where the Maoists had torched 27 vehicles belonging to a road contractor earlier in the day. The blast occurred near the Lendhari nallah in the Kurkheda area.

Shiv Sena spokesperson Neelam Gorhe underlined that the Gadchiroli-Chimur Lok Sabha constituency had recorded the highest turnout in the state this election and described the attack as a “threat” to democracy. The seat voted on April 11. Polling in Maharashtra ended on April 29.

Prime Minister Modi condemned the “despicable” attack. “I salute all the brave personnel. Their sacrifices will never be forgotten,” he tweeted. “My thoughts & solidarity are with the bereaved families. The perpetrators of such violence will not be spared.”

“Once again terrorists have targeted the convoys of our jawans. Clearly despite their tall talk no lessons from Pulwama have been learnt. It is a wake-up call for state and central governments,” he tweeted.

After the Pulwama attack, the government had modified the rules of troop movements in Jammu and Kashmir and launched retaliatory air strikes on an alleged terror camp in Balakot, Pakistan, whose results remain in the realm of conjecture.

Congress chief spokesperson Randeep Surjewala said that more than 390 jawans had fallen to Maoist attacks in the past five years, exposing what he described as the Modi government’s hollow claims on national security.

Congress president Rahul Gandhi tweeted that the attack had “pained” him and conveyed his condolences to the bereaved families.

“He should step down immediately,” Pawar tweeted. “Those who feel shame of conscience if not shame of public opinion would have resigned. But the people who are in power today are not going to do so.”

Pawar said that Maoist activities in the state were growing as a result of the “rulers neglecting law and order situation in the Naxal-affected areas”.

“Hence there is no option but to condemn the attack and express grief over the jawans’ deaths,” he added.

He tweeted: “We will not allow this attempt… to succeed.”

Sanjay Raut, the Sena chief whip in Parliament, said that attacks had been taking place in Gadchiroli over the past few days. PTI