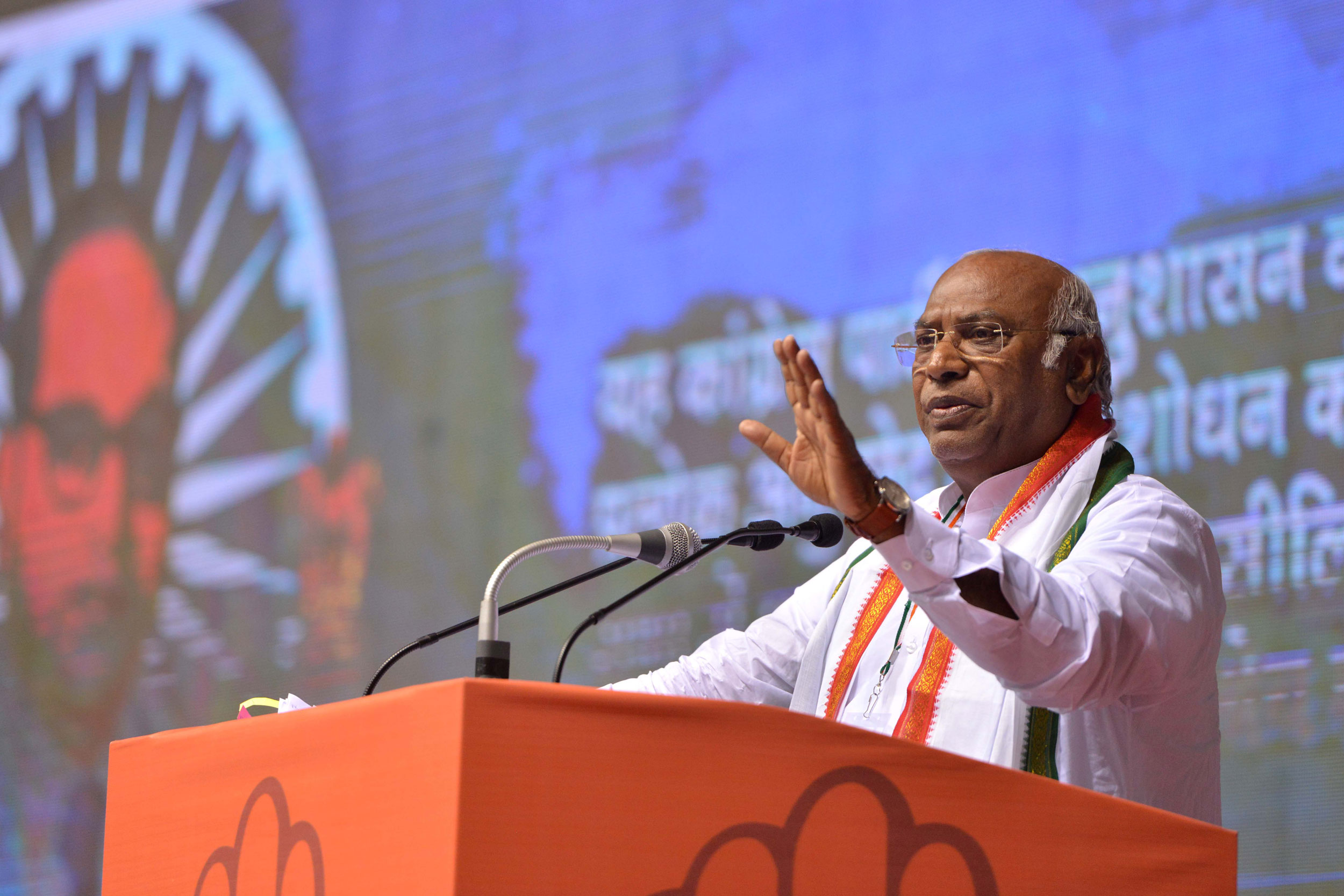 Mallikarjun Kharge spoke against the backdrop of the unfolding developments in Karnataka where the Congress-Janata Dal Secular alliance is struggling to survive but he also referred to the chain of defections to the BJP in Bengal.
Telegraph file picture
Sanjay K. Jha   |   New Delhi   |   Published 07.07.19, 09:55 PM

Veteran Congress leader Mallikarjun Kharge has said the BJP has mastered the art of engineering defections and is deploying it brazenly to weaken all Opposition parties.

Kharge spoke against the backdrop of the unfolding developments in Karnataka where the Congress-Janata Dal Secular alliance is struggling to survive but he also referred to the chain of defections to the BJP in Bengal.

“Nobody else has the power and resources to dislodge a state government. The BJP has mastered the art of engineering defections and they are deploying it brazenly to weaken all Opposition parties. And destroying the Congress is on top of their agenda,” Kharge told The Telegraph.

Kharge’s assertion comes in the wake of allegations that the fresh trouble in Karnataka may be a result of internal conspiracy. While BJP leader B.S. Yeddyurappa has firmly denied any role, the JDS suspects the role of Congress leader and former chief minister Siddaramaiah as some of the MLAs who defected are close to him. Siddaramaiah too blamed the BJP for the toppling game.

Kharge denied any internal sabotage, saying: “It is 100 per cent BJP. Who else can pressurise so many MLAs? Who else can afford such a costly operation? Who is paying for the chartered flights and hotel stay? The BJP alone can do it. We know the people who managed it. This is not the first time; Operation Kamala is known to the entire country. How many times they tried to steal the MLAs and how allegations of bribery and other forms of allurements were given is known to the people.”

Kharge added: “They have already done this in several states — in Arunachal Pradesh, Uttarakhand. What is happening in Bengal? Everyday leaders from Trinamul are joining the BJP. Is it happening automatically or done through money and arm-twisting? They lured away four Rajya Sabha MPs of the TDP, they are trying very hard in Madhya Pradesh also.”

Launching a scathing attack on the BJP leadership, Kharge said: “The Prime Minister has no respect for democratic norms. Nothing can happen without his concurrence. The BJP president and the home minister of India is the same person. Are the BJP president and the Prime Minister not concerned about such defections and such brazen attempts to buy leaders and legislators from other parties? Central agencies and government machinery are being used for coercion and threats.”

The Congress leader recalled how minority governments had run full terms in the past both at the Centre and in states but the BJP had introduced a new culture where Opposition parties are struggling to run majority governments.

“This is not good for democracy; this will create a disturbed political environment in the country where instability and turmoil will become the order of the day. Apart from being unethical and unconstitutional, this is also showing disrespect to the people’s wish. Mandates are being changed through unfair means. We all saw how the people’s mandate in Bihar was violated,” Kharge added.

As the BJP has firmly denied any role, with party’s Karnataka in-charge Muralidhar Rao dismissing it as “nonsense,” Congress leaders asked why the rebel MLAs were given protection in Mumbai. The Congress went to the hotel in Mumbai to protest against the defection drama but the police didn’t allow them to reach the venue.

Mumbai Congress workers have gathered outside Sofitel Hotel, alleging that “democracy is being slaughtered” by using money power.

Former Congress MP Eknath Gaikwad said at the protest venue in Mumbai: “Lots of money was involved in it. Had they given the resignations on their own, they wouldn’t have come to Mumbai. They would have stayed in Karnataka.”

Congress leaders claimed that while some BJP leaders were allowed to go inside the hotel, even those who managed the travel were linked to the party.