Scores of party workers and supporters, many clad in black attire, turned up at the late Tamil Nadu chief minister's memorial at the Marina 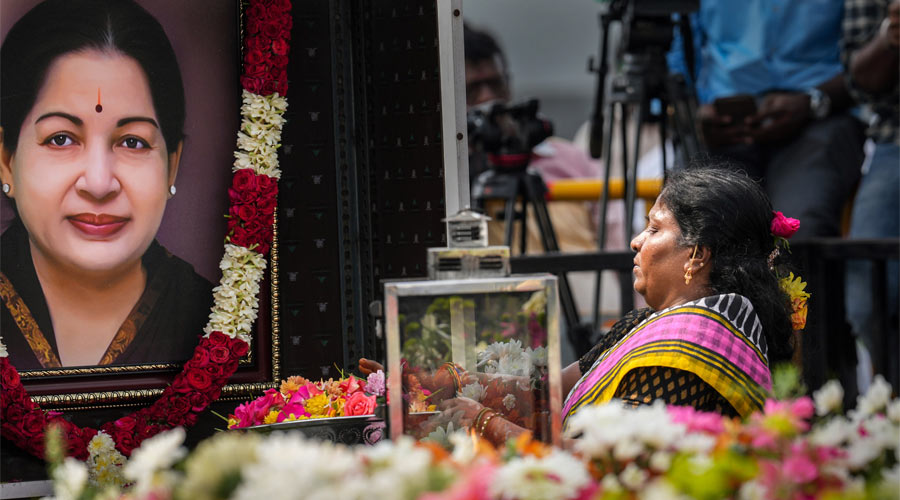 Scores of party workers and supporters, many clad in black attire, turned up at the late leader's memorial at the Marina here.

The party workers also vowed to walk the path laid down by her, saying she steered the party that was founded by the stalwart and late CM MGR (M G Ramachandran), to "chase away evil force" and make Tamil Nadu proud.

Ramachandran is fondly addressed as MGR.

They also vowed to "send home the family rule," pave the way for people's rule and make Tamil Nadu the top state in the country.

In his address, Palaniswami heaped praises on Jayalalithaa and recalled she handled law and order issues "with an iron hand." Later, rival leader Panneerselvam, flanked by his supporters including MLAs P H Manoj Pandian and R Vaithilingam, paid floral tributes to the late AIADMK general secretary, before leading a procession to her memorial.

Party workers remembered the late leader across Tamil Nadu and neighbouring Puducherry. Many who came to her memorial here could be seen turning emotional.

After having led her party to a rare successive electoral triumph in 2016, Jayalalithaa died on December 5 that year, following a 75-day hospitalisation.