The President promised a party delegation, which met him on Wednesday, that he would talk to the government on the same day itself 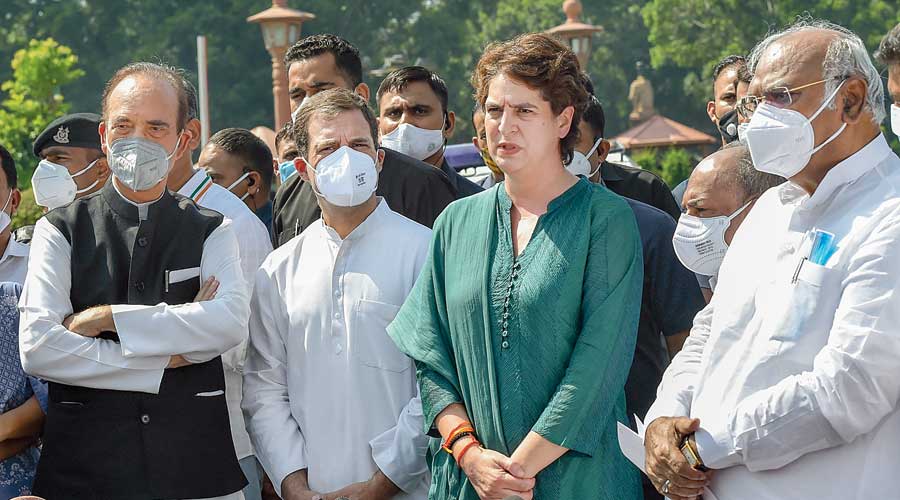 A Congress delegation on Wednesday appealed to President Ram Nath Kovind to intervene and ensure justice for the victims of Lakhimpur Kheri, contending a fair investigation was impossible as long as Ajay Mishra Teni remained part of the Union government.

The delegation told the President the central and Uttar Pradesh governments were sympathetic to the accused and that the administration had refused to register an FIR until Rahul Gandhi and Priyanka Gandhi Vadra mounted pressure by visiting the victims’ families.

On October 3, a convoy led by a Thar jeep — Teni’s son Ashis Mishra was allegedly in the vehicle — had ploughed into protesting farmers in Tikunia, Lakhimpur Kheri, killing four farmers and a journalist. Ashis was arrested on October 9.

The Congress delegation told Kovind that Teni, Union minister of state for home, was himself an accused in an old murder case.

For the past 10 days, the Congress has been pressuring the government on the Lakhimpur Kheri massacre, challenging the perception that the party is incapable of fighting a battle to the end and tends to cry off after creating an initial impact.

Before taking the matter to the President, the party’s top leadership had visited the victims’ families in Lakhimpur. The party had organised a public rally in Varanasi to seek justice, and held a countrywide “maun vrat” (silent protest) against Teni’s continuance in the ministry. Priyanka had returned to Tikunia to attend the final prayers for the dead.

Although Prime Minister Narendra Modi and Union home minister Amit Shah have remained silent about the massacre, signs of unease have emerged within the BJP with the Congress pressure beginning to influence the climate of opinion.

The President promised the Congress delegation that he would talk to the government on Wednesday itself. Apart from Rahul and Priyanka, the delegation included Mallikarjun Kharge, Ghulam Nabi Azad and A.K. Antony.

After the meeting, Rahul said: “The families had told us they want two things: the person who committed this crime should be punished and the central minister should be removed. (As long as) the person is in the ministry, justice is impossible.

“We told the President that this is not the sentiment of only the families of those killed, this is the demand of every farmer of the country. This minister threatened the farmers a few days ago.... Now we want removal of this minister and a judicial probe by two sitting Supreme Court judges.”

Priyanka too said that justice would be impossible if Mishra remained in the government.

Priyanka said: “Every right-thinking citizen understands that the hope for justice should not be stamped out.”

“What the government is doing today is sending a message that you won’t get justice. They are telling people that the law doesn’t apply to BJP ministers and leaders. We have full confidence that the President will do his best to ensure justice.”

The letter they handed over to the President said: “We write to you on a matter of grave and urgent public interest. Like crores of other Indians, we are certain that you are also deeply affected by the unforgivable and merciless murder of farmers in Lakhimpur Kheri, Uttar Pradesh. The incident has scarred the soul of India.

“This deliberate act of murder, in broad daylight followed by the audacious reactions of the state and central governments, has completely eroded the people’s faith in those tasked with bringing these perpetrators to justice.

“As Your Excellency is no doubt aware, lakhs of farmers have been protesting (against) the three ‘black farm laws’ at the doorstep of Delhi for close to a year now. They have braved extreme weather — rain, extreme heat and cold — yet their resolve remains undiminished. Close to a thousand farmers have lost their lives but their determination to seek justice in a Gandhian way remains firm.

“The Modi government has refused to relent or have a meaningful conversation with them. Their policy appears to be ‘tire and retire’ the annadatas (food givers), a strategy doomed to failure.”

The letter described the Lakhimpur carnage as “one of the most gruesome and premeditated acts of bone-chilling murder ever seen and caught on camera”.

“Multiple eyewitnesses have confirmed that the minister’s son Ashish Misra was in the vehicle. Two of the vehicles involved were owned by the minister,” it said.

The letter requested the President to ensure the minister’s removal for the sake of a fair investigation.