Police, unable to control Muharram procession, targeted the photojournalists and charged them with batons 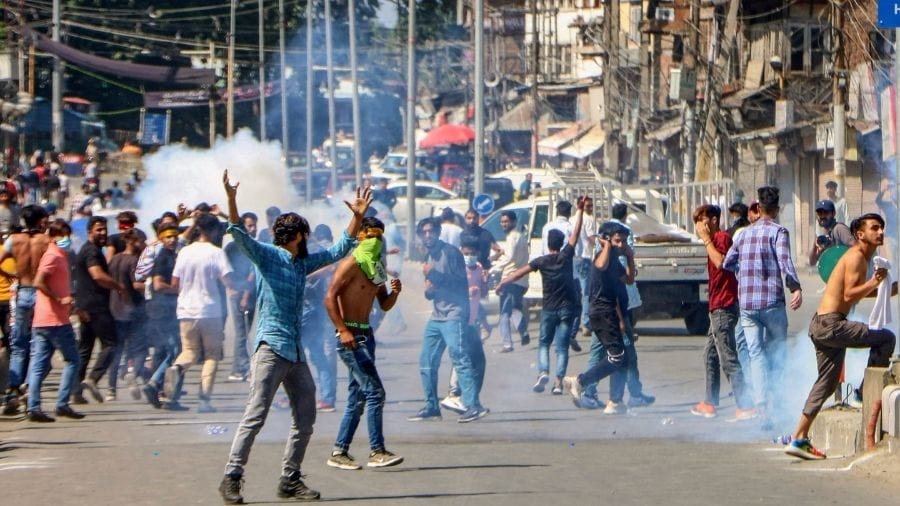 The police, after roughing up the journalists on Tuesday, also detained a few Shia mourners at Jehangir Chowk in Srinagar.
File picture
Our Bureau, PTI   |   Srinagar   |   Published 18.08.21, 03:53 PM

Jammu and Kashmir police chief Dilbag Singh on Wednesday directed "immediate action" against a police officer involved in the beating of journalists during a Muharram procession in the city, terming it "undesirable behaviour".

The incident occurred on Tuesday when photojournalists were performing their duty of covering the procession in the city.

Police, unable to control the procession, targeted the photojournalists and charged them with batons besides rouging them up physically. Several photographers including S Irfan of the PTI, Waseem Andrabi of the Hindustan Times and Sajjad Hamid of Free Press Journal, whose camera was also broken, were injured.

The police, after roughing up the journalists on Tuesday, also detained a few Shia mourners at Jehangir Chowk in the city as they tried to take out a procession to mark the eighth day of the 10-day Muharram mourning period.

The traditional Muharram procession used to pass through the areas of Abi Guzar, Lal Chowk and Dalgate areas, but has been banned since the eruption of militancy in 1990.

The pictures and videos of the incident were uploaded on social media as journalists protested the police action. Kashmir Press Photographers Association (KPPA) condemned the use of force by police and termed its action "unjustified and uncalled for".

The Kashmir Press Club condemned the assault and demanded action against the policemen involved in the incident as well as sensitisation of the police force to ensure media freedom is respected.

Leaders cutting across political lines had on Tuesday denounced the incident, with National Conference (NC) vice president Omar Abdullah saying the police action was unfortunate and expressed hope that Jammu and Kashmir LG Manoj Sinha will ensure such incidents are not repeated.

People's Democratic Party (PDP) president Mehbooba Mufti also took to Twitter to highlight the issue saying, "Media is spending hours debating the human tragedy and unfolding crisis in Afghanistan but will they speak up for their own community in Kashmir who were beaten to pulp today by security forces for doing their job?"

The Jammu and Kashmir Peoples Conference (JKPC) led by Sajad Lone condemned the police action and said, "Merciless beating of journalists is highly condemnable. We express serious concern over such repeated acts of use of force on the media fraternity without any accountability. Surprisingly, the upholders of the law are out to demolish the founding principles of law."