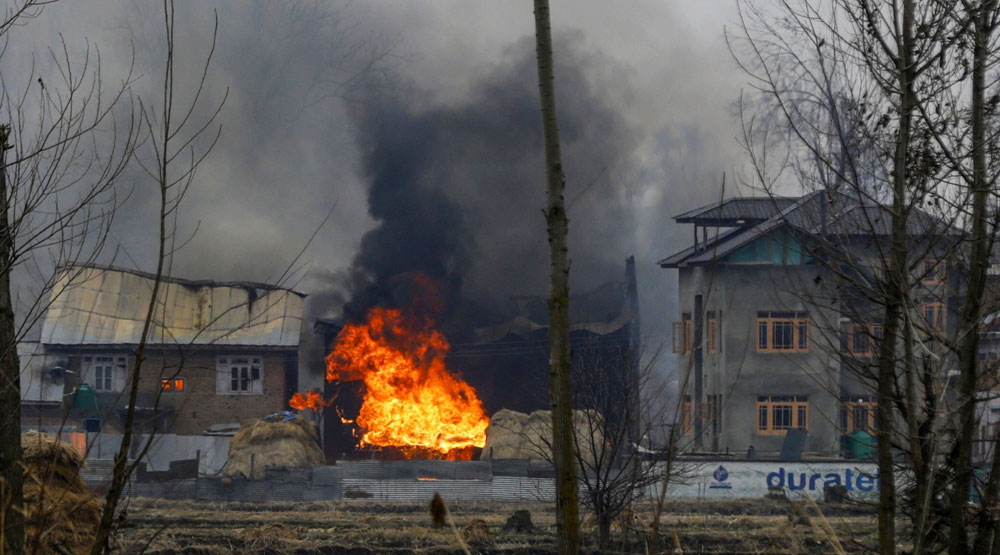 Flames rise from the house where two alleged masterminds of the Pulwama attacks were said to be hiding, during an encounter with security forces, in Pinglena area of Pulwama district in south Kashmir on Monday.
(PTI)
Muzaffar Raina   |   Srinagar   |   Published 18.02.19, 09:34 PM

Three militants, including the suspected chief of the Jaish-e-Mohammed in Kashmir, were killed on Monday but the security forces had to pay a heavy price as the protracted operation claimed the lives of an army major, three soldiers and a police head constable and injured three senior officers.

The officers injured were a brigadier, a lieutenant colonel and a deputy inspector-general who heads the south Kashmir police force.

A civilian also lost his life while another six jawans were injured in the 16-hour gunfight that broke out in the wee hours of Monday at Pinglina village of south Kashmir’s Pulwama, the same district where the car-bombing that killed 40 CRPF personnel took place on Thursday. The sites of the attack on Monday and that of Thursday are around 12km apart.

Military operations can never be reduced to a numbers game but the toll of five deaths and nine injured when faced with three militants does raise concerns. A major had died on Saturday while defusing a mine in Rajouri.

One of the three militants killed in Monday’s gunfight was identified by the police as Kamran, a Pakistani, who took over as the operational chief of the Jaish in February last year after the death of its commander Mufti Waqas.

Some reports claimed he was the mastermind of Thursday’s car-bombing but a police spokesperson said his role was being probed. The officer said he had been active in Pulwama since 2017.

State police chief Dilbagh Singh said it was being verified whether Kamran was the mastermind. “We will not like to say much on that but there are fair indications that they (the three dead militants) were one way or the other involved in that attack,” he said.

Adviser Kumar said their injuries were proof that they were leading from the front. “It is not (because of) absence of tactic or lack of planning. The German army during the World War also faced the same allegation that a lot of officers died but it was interpreted that the officers were leading,” he told reporters.

Police sources said the militants lobbed grenades and opened indiscriminate fire at the forces who were trying to zero in on their hideout. The major and the three jawans were critically injured in the initial burst of fire by the militants.

A gunfight ensued, during which Mushtaq Ahmad Bhat, a houseowner, lost his life.

The scene of the gun battle shifted as the militants, who were not spotted for a few hours, started moving from house to house. Several houses are said to have suffered damages during the exchange of fire.

As the operation was dragging on, the forces were joined by DIG Kumar and the brigadier who were hit.

The forces eventually neutralised the two militants but third militant continued to give a tough fight. He was killed later in the evening.