Advertisement
Home / India / In his first poll rally in UP, Mulayam asks voters to back his son Akhilesh

In his first poll rally in UP, Mulayam asks voters to back his son Akhilesh 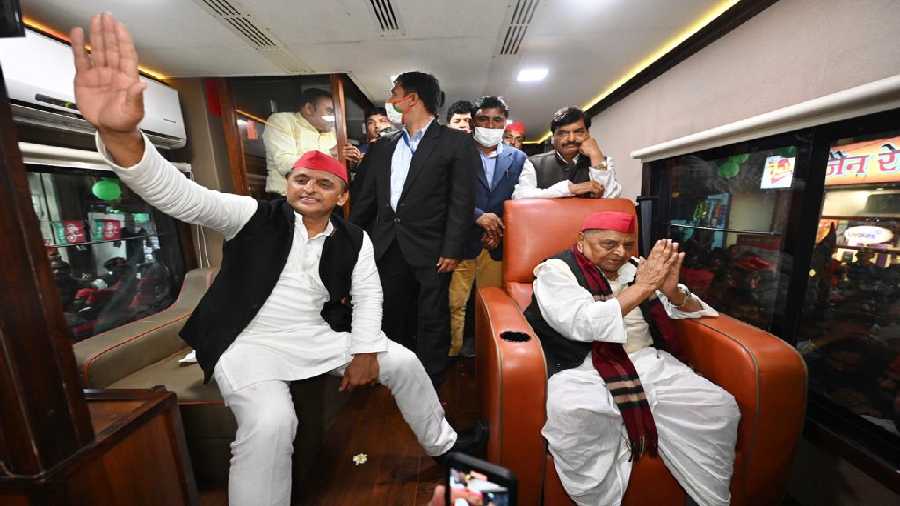 Making his first appearance at an election rally, Samajwadi Party patriarch Mulayam Singh Yadav on Thursday sought votes for his son Akhilesh Yadav, promising that his party will fulfil the aspirations of the people.

Yadav said the people want problems of poverty and unemployment to be resolved, and his party's policies are very clear on these issues. He appealed to the people to ensure the victory of SP chief Akhilesh Yadav.

The polling for the third phase will be held on February 20 in Karhal where the BJP has pitted Union minister SP Singh Baghel against Akhilesh Yadav.

Incidentally, Union Home Minister Amit Shah also campaigned with Baghel almost simultaneously in this constituency on Thursday at a poll rally about three kilometres away. Addressing a rally in the SP stronghold, Shah also took potshots at the party for bringing veteran leader Mulayam Singh Yadav for campaigning.

Mulayam said, "The eyes of other countries of the world, including the United States, are on the Samajwadi Party in these elections and now the people of India will decide. But one thing is clear that your hopes will be fulfilled by the Samajwadi Party.

Akhilesh touched his father's feet on stage and sought his blessings. Recalling the long association of his family with the area, the SP chief said "Netaji (Mulayam) did his studies, taught in a school and also started politics from here."

In his address, Mulayam Singh Yadav said, "It is the policy of the Samajwadi Party that our farmers should be given priority, arrangement of fertilizers and seeds should be made and they be provided the means of irrigation which will increase the yield.

"If the yield increases, the condition of the farmer will improve. Similarly, jobs should be arranged for our educated youth. No government is doing this," he said.

He assured the people that if a Samajwadi Party government is formed, employment and jobs will be provided to the youth as they are essential for running families.

He said traders will be extended facilities so that they can buy the produce of farmers. With this, both the farmer and the trader will prosper, he said.

He also advocated for providing facilities to the youth. "If you give profit to the trader, then he will buy the farmer's crop at a good price and that will benefit the latter," he said.

In his speech, SP president Akhilesh Yadav said his father's presence has added to the grace of the election rally. "This is Netaji's area where he studied, taught, started politics and also participated in wrestling bouts," Akhilesh said.

"The movement that Netaji has brought up till this point, it is our responsibility to take it ahead for the next hundred years," he said.

He also said by the fourth phase of polling, his party will get enough seats to form government in the state.

Exuding confidence of getting support from the people here, Yadav said, "The BJP workers would not be seen at the polling booths of Karhal Vidhan Sabha (on the polling day) as they neither have youth, farmers nor mothers and sisters with them."

The SP chief said that the BJP tells lies and instigates quarrels and hence it should be named as "Bharatiya Jhagda Party". The former chief minister reiterated the promises made by his party of providing electricity, free ration, restoration of old pension to government employees and socialist pension on coming to power.