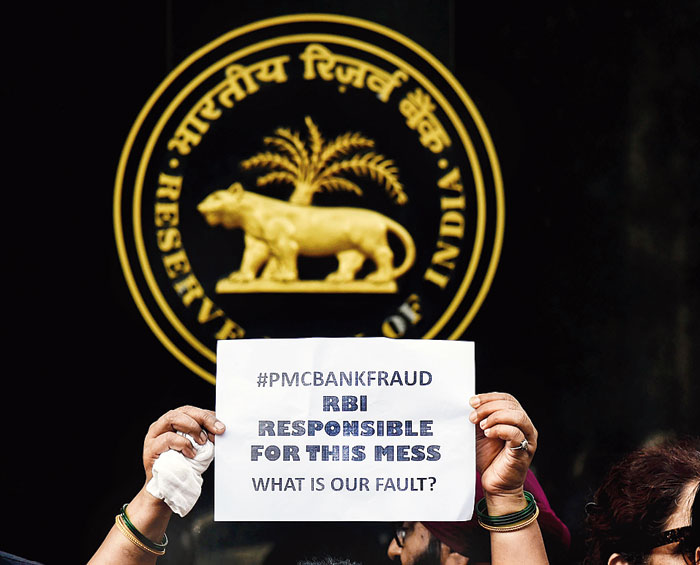 Under RBI directions, however, exceptions can be made for medical emergencies. It remains unclear whether the family had made any request under this provision to the PMC Bank and been rebuffed.
File photo
PTI   |   Mumbai   |   Published 19.10.19, 01:21 AM

An 83-year-old depositor with the troubled Punjab & Maharashtra Cooperative Bank died on Friday, his family claiming they had been unable to raise money for his heart surgery because of the restrictions on withdrawals.

Murlidhar Dharra was a fourth depositor of the bank to die after the Reserve Bank appointed an administrator for the Mumbai-headquartered lender and put restrictions on withdrawals on September 24.

One of the earlier deaths had been caused by a heart attack, another by a cardiac arrest while the third was an alleged suicide by a woman doctor.

Dharra died at his home in suburban Mulund, his son Prem Dharra told PTI. The family had Rs 80 lakh in deposits with the bank, he said.

Prem said doctors had recommended heart surgery for his father but the family could not arrange the money since their deposits were stuck with the bank.

Under RBI directions, however, exceptions can be made for medical emergencies. It remains unclear whether the family had made any request under this provision to the PMC Bank and been rebuffed.

After an alleged Rs 4,355-crore scam came to light at the bank, the RBI had initially capped withdrawals at Rs 1,000 considering the liquidity crisis. It later hiked the sum to Rs 40,000.

The depositors have been protesting over the past three weeks, seeking their money back.

On Tuesday, Sanjay Gulati, 51, who had recently lost his job with Jet Airways when the airline was grounded, died of a heart attack hours after attending a depositors’ protest.

Then followed the alleged suicide by Dr Nivedita Bijlani and the death of Mulund resident Fatto Punjabi from cardiac arrest.

The crisis at the bank is being attributed to loans given to realty player HDIL turning into non-performing assets. These loans were allegedly hidden from the regulators’ scrutiny. Five people, including HDIL promoters, have been arrested.

The Supreme Court on Friday refused to entertain a plea from PMC Bank account holders seeking the lifting of the restrictions on withdrawals, a report from New Delhi said.

A bench headed by Chief Justice of India Ranjan Gogoi asked the petitioners to approach Bombay High Court, refusing to hear the plea under Article 32, which litigants can invoke to seek protection of their fundamental rights.

Advocate Shashank Sudhi, appearing for petitioner Bejon Kumar Mishra, said he had filed the petition on behalf of 500 account holders.

Solicitor-general Tushar Mehta said the Enforcement Directorate was taking appropriate action against the culprits behind the scam.