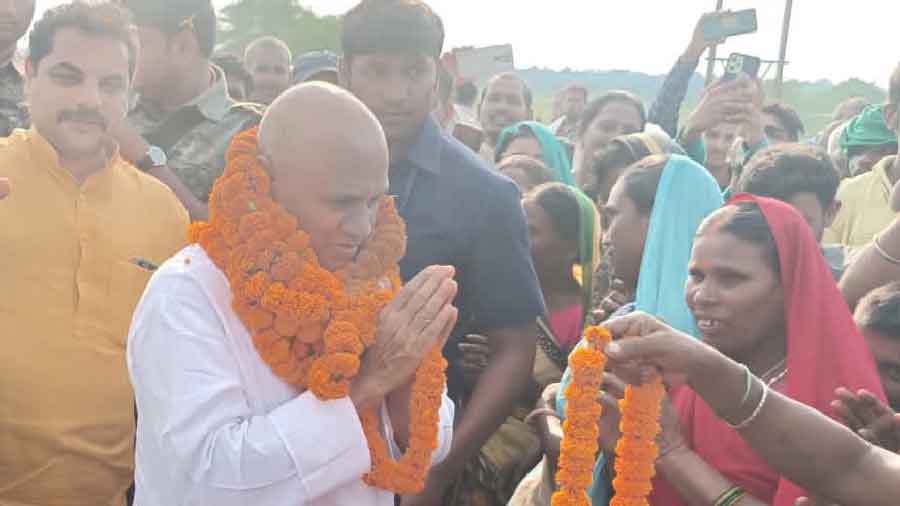 Former Union minister RCP Singh, who had quit the Indian Administrative Service (IAS) to join Bihar Chief Minister Nitish Kumar's JD(U) 12 years ago, on Saturday announced his resignation from the party which he had headed a year-and-a-half ago.

Singh made the announcement at a press conference he convened at his ancestral village in Nalanda district, hours after a letter served on him by the party leadership seeking an explanation about allegations of corruption got circulated in the media.

"I cannot take it anymore though I am yet to receive the letter," claimed Singh, who appeared well aware of the contents of the communication issued by JD(U) state president Umesh Singh Kushwaha, citing complaints of unidentified party workers that the bureaucrat-turned-politician had amassed "huge property" from 2013 onwards.

"I have had a good career in the IAS as well as in politics. Nobody has ever been able to raise a finger on my probity," said a visibly upset Singh who had to give up his ministerial berth recently on account of the party denying him another term in the Rajya Sabha.

Asked whether he now intended to join the BJP, the JD(U)'s alliance partner to which he has been accused of having grown too close, Singh said he has not yet made up his mind.

Singh, however, took a jibe at Kumar's prime ministerial ambitions, remarking, "He will not become (the PM) even if he were to be reborn seven times."

The disowned prot g used the occasion to vent some spleen against his mentor whom he accused of having "not even shown the courtesy to inform me beforehand that I was not being considered for another term in the Rajya Sabha".

"This talk of my having served two consecutive terms does not hold because had it been a party policy it should have been applicable to all. Even the current national president Rajiv Ranjan Singh alias Lalan has served more than two terms in the Lok Sabha," he pointed out.

Blamed by many leaders for the JD(U)'s poor show in the 2020 assembly polls wherein the party's tally fell to 43 compared with 71 five years earlier, Singh said, "I was then the national general secretary (organisation). But what about the national president. The post was then held by the chief minister himself. I took over when he stepped down."

The former IAS officer, who had earned Kumar's trust and respect while on central deputation when the latter was a Union minister, minced no words in accusing his boss of complacency on which he blamed the JD(U)'s dwindling fortunes.

"Have you seen any other chief minister who wastes three hours every evening enjoying gossip over snacks with members of his coterie? He (Nitish) was a different man in his first term from 2005-2010 for which he is still remembered and respected. We used to tell him that he was a prime minister material and it seems that went to his head," alleged Singh, who had joined the JD(U) in 2010.

The former bureaucrat took care to take no names though he dropped ample hints that he suspected leaders like Upendra Kushwaha to be behind a "conspiracy" against him.

"There is no remedy for envy. Some people resented my induction into the Union cabinet. Those who had fought the last assembly polls as chief ministerial candidates of non-starter coalitions are now occupying the centrestage in the JD(U). The party is now finished. I am giving up my primary membership," Singh said.

Notably, Kushwaha had earlier in the day sought to twist the knife by stating that investigating agencies could take suo motu cognisance of allegations against Singh and take appropriate action.

A former Union minister himself, Kushwaha had re-entered JD(U) last year, merging his Rashtriya Lok Samata Party, a move that was seen as Kumar's attempt to consolidate his OBC base but had left RCP Singh, the then national president, unhappy.

"No case can be made out against my wife and my two daughters, who have been dragged into this matter. I would like to say that those living in glass houses must not hurl stones at others," said Singh.

Incidentally, one of Singh's daughters, Lipi, is a Bihar cadre IPS officer and currently posted as the superintendent of police of Saharsa district.

Singh also mocked JD(U) leaders, including Lalan, who had taken exception to "RCP should be our CM" slogan being raised by supporters.

"Did anybody say I should be made the CM removing the current one. What was there to be so insecure?" he asked sarcastically.