Bengal ban a ‘betrayal of Constitution’ 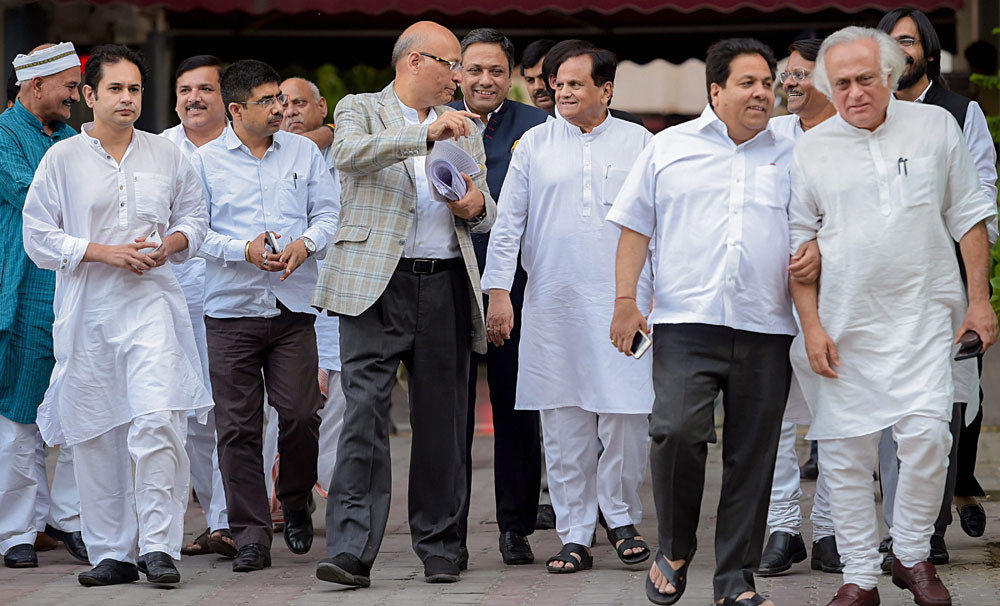 Congress leaders Ahmed Patel and Abhishek Manu Singhvi talk as they leave, along with other party leaders, after meeting the Election Commissioner at Nirvachan Bhavan in New Delhi on Thursday.
Picture by PTI
Our Special Correspondent   |   New Delhi   |   Published 17.05.19, 02:11 AM

The Congress on Thursday said the “integrity” of the Election Commission was in doubt after the “unpardonable betrayal of the Constitution” through the decision to curtail the campaign period in Bengal.

The Congress led a delegation of Opposition parties to the EC with a plea for review of the order to cut short electioneering by 19 hours, arguing that it was ironical to punish other parties without an investigation for a crime purportedly committed solely by the BJP.

Congress spokesperson Abhishek Singhvi said the Opposition delegation wasn’t satisfied with the commission’s response. Sources claimed that the EC said the situation in Bengal was bad and the curtailment of the campaign had affected all the parties and it was wrong to presume there was an intention to help the BJP.

Although the delegation only had the Congress, TDP and the AAP, other parties that came forward to criticise the commission included the BSP, SP, RJD and the NCP.

The memorandum submitted to the commission said: “…the BJP mobs hatched a well-planned conspiracy and violently clashed with Trinamul members (during BJP chief Amit Shah’s road show in Calcutta on Tuesday). During the violence that followed, the mob vandalised Vidyasagar College and broke the 200-year-old statue of Ishwarchandra Vidyasagar. There are videos that clearly suggest that the clashes were indeed carried out by the BJP members.”

The memorandum added: “This is a surprising and shocking reaction that penalises parties who have nothing to do with the violence orchestrated ostensibly at the hands of the BJP. The EC, instead of enforcing a level playing field, has arbitrarily decided to cut off campaigning to the prejudice of all other parties. This, in fact, benefits the BJP, which has two rallies scheduled today.

“Widespread doubts have been raised by the general public about the timing of the campaign prohibition since the prohibition only begins after the Prime Minister’s election campaign ends in West Bengal on May 16.”

The shortened campaign period ended at 10pm on Thursday.

Congress communications chief Randeep Surjewala had earlier said at a media conference: “Does the Election Commission now take orders from the BJP headquarters rather than from the mandate of the Constitution? As a responsible political party, we have never cast unwarranted aspersions on the actions of constitutional bodies, but we are deeply saddened to say that the Election Commission of India has completely lost its independence and abdicated its constitutional integrity.”

He added: “Instead of punishing the BJP and its goons led by Amit Shah, the Election Commission punished democracy. This is unpardonable betrayal of the Constitution. Both democracy and the Election Commission are sought to be stifled by the BJP. Why did the EC postpone its order to 10pm today, solely to give free pass to the Prime Minister to hold rallies? Can there be a more glaring instance of bias? Impartiality and objectivity of the EC will doubtless come under question.”

Arguing that the commission was not using its power under Article 324 of the Constitution to ensure a level playing field, Surjewala said: “This appears to be the Election Commission’s parting gift to the Prime Minister and the BJP, ensuring that the two pre-announced election rallies at Mathurapur and Dum Dum are not hit. Every citizen is questioning the independence, impartiality, objectivity and fairness of the Election Commission today. Has the EC become a mere helpless pawn in the hands of the Modi-Shah duo?”

Surjewala recalled the complaints filed by the Congress against Modi and Shah for allegedly violating the model code of conduct and accused the EC of meek surrender.

“Has the watchdog become subservient to the machinations of the ruling dispensation?” the Congress leader asked.