Party to hold hold a 'Chintan Shivir' after Budget session 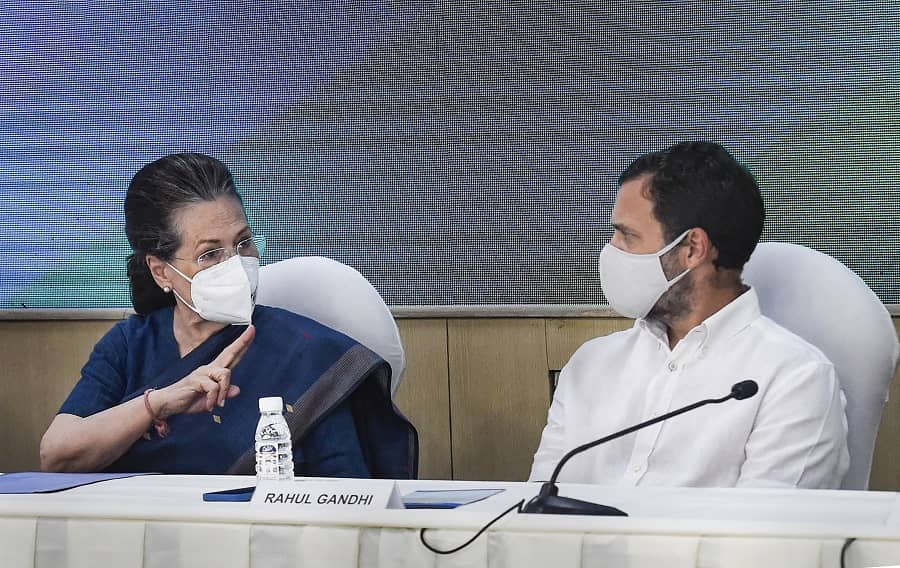 Days after its election debacle in five states, the Congress' top decision-making body on Sunday unanimously decided that party president Sonia Gandhi will continue as interim chief till the organisational polls are held and urged her to effect immediate corrective changes to meet the political challenges.

During the nearly five-hour-long meeting of the Congress Working Committee, party chief Sonia Gandhi said she was ready to make "any and every sacrifice" that the party workers and the CWC wish, after which the CWC reposed full faith in her, according to some party leaders who participated in the deliberations.

Congress' chief spokesperson Randeep Surjewala said every Congress worker wants Rahul Gandhi to lead the party, but as the process of the organisational polls is underway, the next president will be decided through that process.

Amid calls for large-scale reforms to revive the party's dwindling electoral fortunes, AICC general secretary KC Venugopal, at a press conference after the CWC meeting, said the party president will immediately take up corrective measures to revamp and re-strengthen the organisation.

The Congress will hold a 'Chintan Shivir (brainstorming session)' after the Budget Session of Parliament and the CWC will meet again before that, Venugopal said. The session is scheduled to end on April 8.

Rajasthan Chief Minister Ashok Gehlot suggested that the 'Chintan Shivir be held in his state.

Sonia Gandhi listened to all leaders at the CWC meet and said she is willing to make required changes to strengthen the party, sources said.

"Every single member of the CWC wants Sonia Gandhi to guide the party till organisational elections are held," Surjewala said.

Ghulam Nabi Azad, Anand Sharma and Mukul Wasnik were the only three from the Group of 23 leaders who participated in the meeting of the CWC, which has a large number of Gandhi family loyalists.

The G-23 leaders have been critical of the current leadership and pressing for an organisational overhaul.

A statement adopted by the CWC said the recent assembly election results of five states are a "cause of serious concern" for the party.

The Congress, however, accepted that due to shortcomings in its strategy, it could not effectively "expose the misrule" of BJP state governments in four states -- Uttar Pradesh, Uttarakhand, Manipur and Goa -- and overcome the anti-incumbency in Punjab in the short time after effecting a change of leadership.

A few months before polls, the Congress had removed Amarinder Singh as Punjab chief minister, replacing him with Charanjit Singh Channi.

"Congress party represents the hopes of millions of Indians against political authoritarianism prevailing in the country today and the party is fully conscious of its immense responsibility," the CWC said.

While humbly accepting the electoral verdict of the latest round of assembly elections, the Congress party assures its workers and the people of India that it will continue to remain a vigilant and vibrant opposition, the statement said.

The Congress will be fully prepared to face the electoral challenges in the election going states in 2022 and 2023 as well as in the Lok Sabha elections 2024, it said.

The CWC also "unanimously" reaffirmed its faith in the leadership of Sonia Gandhi and urged the Congress president to lead from the front, address the organisational weaknesses, effect necessary and comprehensive organisational changes in order to take on the political challenges.

Former prime minister Manmohan Singh did not attend the meeting. Senior party leader A K Antony was also not present as he has contracted COVID-19.

The Congress lost Punjab to the Aam Aadmi Party, could not wrest Uttarakhand, Goa and Manipur from the BJP and the party's tally in politically crucial Uttar Pradesh fell to its lowest.

While Sonia Gandhi has not been actively campaigning for some time, Rahul Gandhi, along with Priyanka Gandhi Vadra, had been the star campaigner for the Congress in the polls, with the brother-sister duo also playing a major role in key decisions of the party.

Despite a high-pitched campaign led by Priyanka Gandhi, the Congress could manage to win only two of the 403 assembly seats in Uttar Pradesh with the vote share plummeting to a meagre 2.33 percent and most of its candidates losing security deposits.

Ahead of the meeting, the chorus for making Rahul Gandhi Congress president again grew louder as several leaders and workers voiced support for him to take on the mantle of party chief.

Gehlot said no one is taking on Prime Minister Narendra Modi as Rahul Gandhi does and that he has been fighting resolutely.

"All of us want that Rahul ji should take on the mantle of party leadership," the Rajasthan chief minister told reporters.

Rahul Gandhi had resigned as Congress president after the party suffered its second consecutive defeat in general elections in 2019.

Sonia Gandhi, who took over the reins of the party again as interim president, had also offered to quit in August 2020 after strong criticism by a section of leaders, referred to as G-23, but the CWC had urged her to continue.