Bid to figure out duration and level of immunity, 6,000 volunteers to be monitored over two years 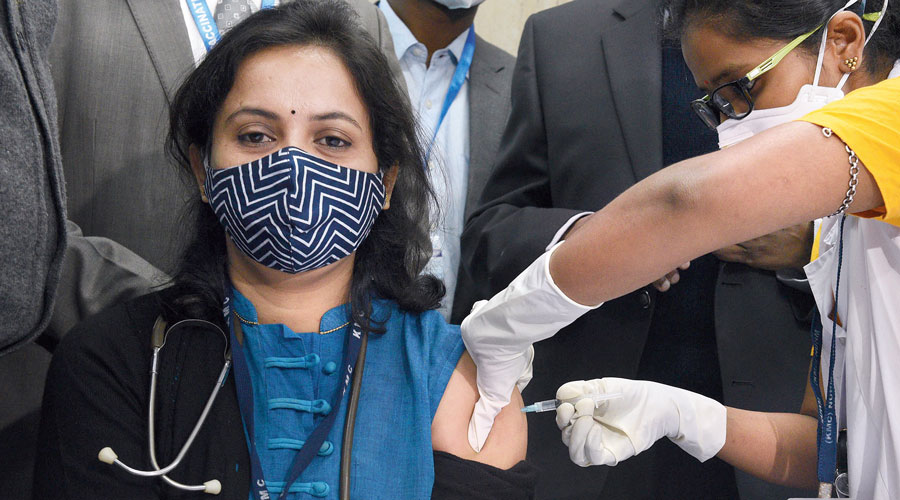 The study, which will continue for up to two years, will measure whether the vaccines are creating the desired levels of immunity and whether their effect lasts for a sufficiently long time.
Telegraph Picture
Paran Balakrishnan   |   New Delhi   |   Published 04.02.21, 04:38 PM

CSIR, the country's premier research and development body, is launching a multi-centre study to assess the effectiveness of the massive anti-Covid-19 vaccination programme. The study will check at regular intervals on the progress of around 6,000 volunteers who have received the vaccine.

The study, which will continue for up to two years, will measure whether the vaccines are creating the desired levels of immunity and whether their effect lasts for a sufficiently long time.

“The vaccine will have to last at least six months. Otherwise, it will be a failure. Six months is enough to break the (infection) chain,” says Dipyaman Ganguly, who’s physician, scientist and immunologist at the CSIR-Indian Institute of Chemical Biology, Calcutta.

Ganguly will serve as the project leader for the immune monitoring programme. The scheme is a CSIR initiative with the Tata Medical Centre.

Specifically, the study will check if the vaccines produce sufficient antibodies to counter Covid-19. It will also check for the presence of memory T-cells that can recognise the coronavirus.

The CSIR (Council of Scientific and Industrial Research) is looking at enrolling about 1,000 volunteers at each of its six centres in different parts of the country.

Follow-up studies of the effectiveness of vaccines being developed around the world are essential because they have been created in record time and have been given emergency clearances by national pharmaceutical regulatory authorities.

In the US, for instance, the Food and Drug Administration (FDA) has granted what is called Emergency Use Authorization (EUA). The FDA says the authorization "is intended to remain in effect only for the duration of the public health emergency related to COVID-19.”

Emergency clearances have been granted to Covid vaccines in different parts of the globe, including India, because of the urgent need to halt the pandemic in its tracks.

Bharat Biotech’s Covaxin, for instance, has only completed its Phase Two trials and has been given emergency clearance to start its vaccination programme. People who receive the vaccine have to sign consent forms that they are aware of this.

Similarly, under normal circumstances, the Serum Institute of India (SII), manufacturing and distributing the Oxford/AstraZeneca vaccine, would have carried out Phase Three trials in India before distributing the British-Swedish jab. That is because immunological responses can vary from one nation to another and different population groups.

Also, if conditions were normal, the two firms currently distributing Covid vaccines in India, SII and Bharat Biotech, would be conducting the post-vaccination studies. But the CSIR believes the companies already have enough on their plates to produce and distribute the vaccines and keep supply chains operational.

The CSIR study will, most probably, enrol doctors and health-workers who have already received the vaccine. They would be an ideal survey group as they would be well-informed and would be able to report any after-effects or other issues they have faced.

Regular RT-PCR tests will also be conducted every month on the volunteers to check if they are getting reinfected again after receiving the vaccine. Says Ganguly: “We have to follow-up with repeat RT-PCR tests. Otherwise, we won't find if they are getting reinfected." The tests would also look into whether people who have got vaccinated develop Covid-19 but remain asymptomatic.

The need for the post-vaccination study has become particularly urgent due to the swift pace of events since the pandemic was first reported in Wuhan in December 2019. Vaccine development began almost immediately and Pfizer BioNTech became the first Western company to announce it had been successful on December 2. No vaccine has ever been created so swiftly. The fastest before this was the mumps vaccine developed over four years in the 1960s.

The sheer speed at which the vaccines have been developed and brought to market have created an entirely different set of problems. Says one scientist: “We know the vaccine is effective for three months because that is how long it has been in the market. We do not know what happens over a longer time-frame."

The findings about how long the antibodies and T-cells stay active could help determine how frequently the Covid vaccinations might need repeating. Some researchers suggest that Covid vaccines could become routine, like annual flu shots.