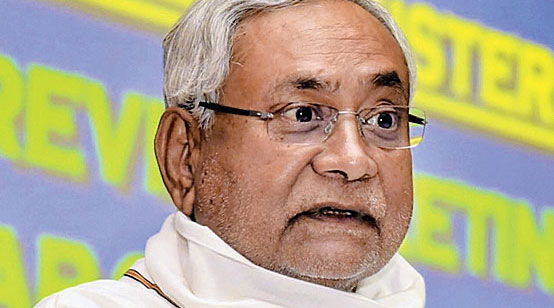 Samples of Bihar chief minister Nitish Kumar, several of his secretaries and deputy chief minister Sushil Kumar Modi were sent for Covid-19 tests on Saturday afternoon after Bihar Legislative Council Chairman Awadhesh Narain Singh, beside whom Nitish had sat at an event earlier this week, and five of his family members tested positive.

Awadhesh, a BJP leader, and his family members have been admitted to the All India Institute of Medical Sciences (AIIMS) in Patna.

Awadhesh and the other politicians have been participating in meetings and programmes, at times allegedly unmindful of social-distancing norms.

Awadhesh’s samples had been collected, along with those of his family members, on June 30 and the reports came on July 4, but he did not quarantine himself in the intervening period. On July 1, he presided over the swearing-in of nine newly elected MLCs in a hall on the Council premises.

The programme was attended by many legislators and politicians from the ruling and Opposition parties, including Nitish and Sushil.

Awadhesh had also been present at another meeting on June 29 to discuss the monsoon session of the Bihar legislature. Nitish, 69 and having a history of respiratory disorders, Legislative Assembly Speaker Vijay Kumar Choudhary and leader of the Opposition Tejashwi Prasad Yadav had been there too.

Nitish, who usually is a stickler for social-distancing rules and other precautionary measures, had sat next to Awadhesh at the oath-taking ceremony, with a gap of barely a foot between them. Vijay Kumar had been seated on the other side of Awadhesh, separated by a few inches. The attendees had been wearing face cover, though.

A media communiqué from the chief minister’s office on Saturday evening said: “Chief minister Nitish Kumar took the initiative to get himself tested for Covid-19 after getting the information about Legislative Council Chairman Awadhesh Narain Singh becoming corona positive. He had recently participated in a programme with Awadhesh Narain Singh. The chief minister has also directed all the officials working close to him to get themselves tested. All necessary precautions as per the medical protocol are being taken.”

Sixteen officers in Nitish’s office have been tested.

“It was very irresponsible of Awadhesh to attend programmes despite being a Covid-19 suspect. He should have isolated himself the day he felt the need for a test, or the day his samples were taken.
He has put so many people at risk,” said a senior official in the state health department.

“We are in the process of preparing a list of people who met him in the past few days. We will also test several IAS and IPS officers and politicians in case the chief minister tests positive,” the official told The Telegraph on the condition of anonymity.

Asked about the chief minister not maintaining social distancing at the oath-taking ceremony, the official said: “This is unbelievable because he keeps appealing to people to wear masks and follow social-distancing norms.”

Nitish chaired two cabinet meetings on Thursday and Friday at which his cabinet colleagues were present.

The turn of events has also called into question the functioning of health services in Bihar as coronavirus test results that usually come in a day took four days in Awadhesh’s case.

“Normally results come in six hours. However, government testing centres have been unable to work to their full capacity due to various reasons. Also, some of them had been shut for a day or two for sanitation purposes recently after some health personnel tested positive. All these have created a backlog of samples and the results are taking much longer to come,” another senior health department official said.

Bihar has reported 11,457 Covid cases and 88 deaths so far. A sharp spike of 546 new cases has been reported in the past 24 hours. So far only 2.5 lakh tests have been conducted in a state of around 12 crore people.

“We pray that nobody tests corona-positive, but the way the chief minister did not follow social-distancing norms and the Council chairman did not reveal that he was a Covid-19 suspect show how the government is working in the state. What will the public learn from them? All the events that they attended could have been held through video-conferencing,” RJD spokesperson Mritunjay Tiwary told this newspaper.