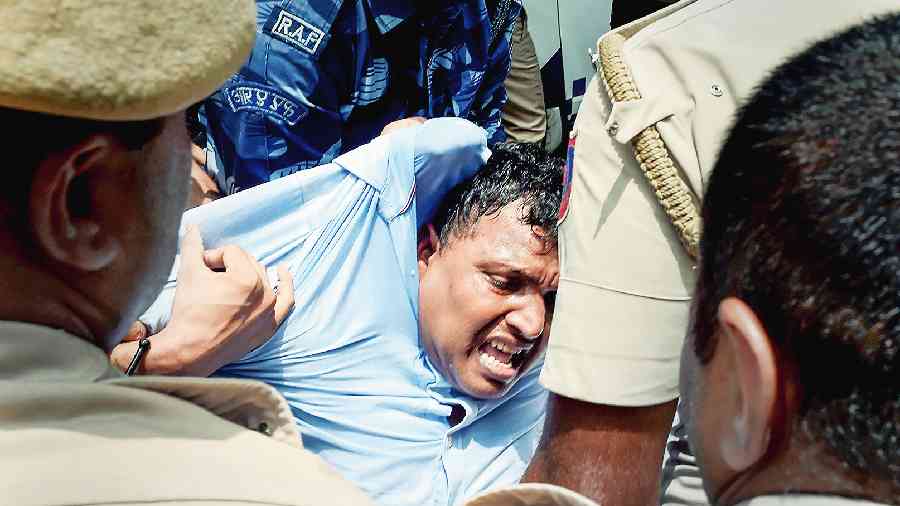 Picture shows police detaining Youth Congress president BV Srinivas during the protest in New Delhi. Footage on social media showed policemen grabbing Srinivas by the hair and trying to shove him inside the police vehicle when he stood up and stuck his neck out to speak to journalists. The policemen, who included RAF personnel, were seen trying to close the door with all their might, at one point almost crushing Srinivas’s head against the edge of the roof. A social media user tweeted: “Public memory is shameless and short, but those who have trauma branded on them remember. Srinivas is the man to whom hundreds of people reached out daily begging for help during Covid. Shame on Delhi police.”
PTI
Sanjay K. Jha   |   New Delhi   |   Published 27.07.22, 03:24 AM

Police bodily lifting Congress MPs and detaining them, manhandling party leaders and preventing a peaceful march to Rashtrapati Bhavan — these were some of the measures adopted on Tuesday to prevent an immediate discussion in Parliament on the rising prices.

Videos showed policemen grabbing Youth Congress chief B.V. Srinivas by the hair near the party headquarters while he screamed his protest. Several of the MPs who were lifted and dragged on a road near Parliament too complained of pain and minor injuries.

Although the prime reason for Tuesday’s street protests was the Enforcement Directorate summoning Sonia Gandhi for questioning in the National Herald case for a second time, the Congress had broadened the ambit to include the price rise, unemployment, Agnipath and the misuse of central agencies to harass political opponents. Sonia has been called for questioning again on Wednesday.

Four hours after being detained by the police while leading Congress MPs to Rashtrapati Bhavan, Rahul Gandhi put out this tweet: “The emperor has issued a diktat — whoever asks questions on unemployment, price rise, flawed GST and Agnipath must be dumped in jail. Though I am in police custody right now, even as raising people’s concerns has become a crime now, they won’t succeed in breaking my resolve.”

The police stopped Rahul and about 70 other Congress MPs at Vijay Chowk, just outside the Parliament building, while they were marching to submit to newly elected President Droupadi Murmu a petition against the government for refusing to allow discussions on price rise.

While the government has said a discussion will be allowed, the Opposition is insisting on the suspension of other business to take up the prices first.

As the march was stopped, Rahul sat down on the road with other MPs, creating a spectacle just outside Parliament. After trying for a while to persuade the MPs to leave, the police began physically lifting and carrying them to waiting buses.

Rahul was the lone person sitting on the road when four buses packed with Congress MPs left for the Kingsway police station. Rahul relented after 45 minutes, walking into a bus to be taken where the other MPs had been detained.

Rahul Gandhi sits on the road after the protest march from Parliament to Rashtrapati Bhavan was stopped.
PTI

The Congress MPs turned the detention centre into a conference hall, debating the four issues they intended to discuss in Parliament.

Party communications chief Jairam Ramesh released a video from the site of detention, saying: “We are concerned that Parliament is not functioning. The entire Opposition demanded immediate debate on prices. But the government refused. Also, our president Sonia Gandhi has been summoned by the ED today again. This is nothing but political vendetta. There is absolutely nothing about money-laundering in the case.”

Rahul said before being taken away by the police: “Inside Parliament, no discussion is allowed. We can’t go to Rashtrapati Bhavan. This is the situation in Hindustan. Modi has turned it into a police state.

“What do the MPs want? They want to talk about price rise and unemployment. But they are arresting us for that.”

Rahul took a jibe at the police and paramilitary forces deployed to block the march, saying: “Adani-Ambani run this country. They are Adani-Ambani Sena.”

Two other places that witnessed massive protests were the Congress headquarters and Janpath. While Youth Congress workers blocked traffic at the Janpath roundabout by lying down on the road, ugly tussles were seen at the party office when the assembled party workers were prevented from stepping out.

The Mahila Congress released black balloons in the sky as a mark of protest.

The party said the chaotic scenes on the streets could have been avoided had the Delhi police given permission for a peaceful satyagraha at Rajghat.

Ajay Maken said at a news conference: “It is distressing that the Congress is not allowed to go to Rajghat. Mallikarjun Kharge talked to the police commissioner but permission was not granted. During UPA rule, the BJP organised a dance party at Rajghat in support of Baba Ramdev. It’s clear that democracy has ceased to exist now.”

Maken added: “We are facing grave difficulties in reaching the party office. Our cars are stopped on the way.”

Party treasurer Pawan Bansal said: “It is tragic that opposition to the Modi government is being treated like an anti-national activity. Such a situation never prevailed in the country.”

All the MPs and other leaders were released around 7pm, after Sonia’s interrogation for the day had ended.

Reacting to the ED summons to Sonia for the third day, Ramesh said: “This is Vishguru’s political vendetta with a vengeance. ‘Atrocious’ is the mildest word to describe it!”