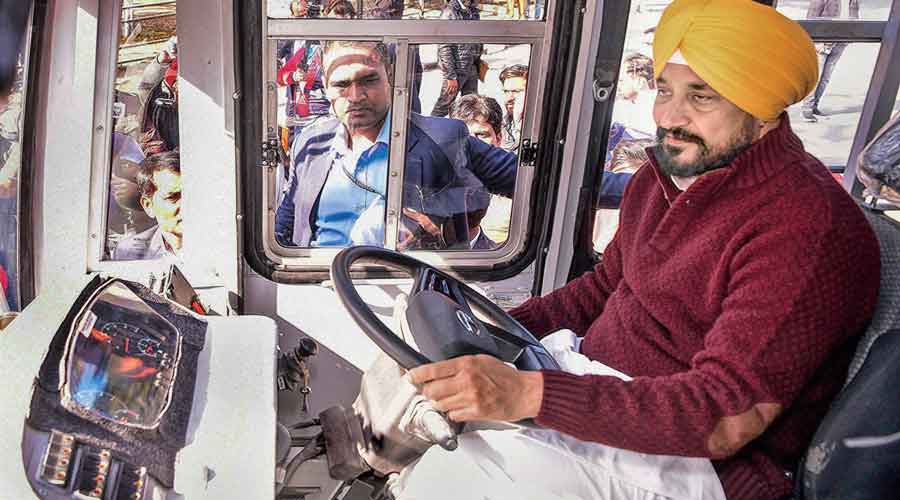 With polls in Punjab a month away, Chief Minister Charanjit Singh Channi feels that the Congress should declare its chief ministerial candidate, pointing out that doing so in the past has favoured the party reap electoral gains.

Channi's statement has come at a time when opposition parties have targeted the Congress, saying it has many chief ministerial aspirants including its state unit president Navjot Singh Sidhu and party leader Sunil Jakhar.

AAP leader Arvind Kejriwal on Wednesday said his party's chief ministerial face for the Punjab Assembly polls will be announced next week.

It is likely that the Aam Aadmi Party (AAP) may declare its MP Bhagwant Mann as the chiefministerial candidate .

Replying to a question on the chief ministerial candidate for the February 14 polls, Channi said the decision has to be taken by the party.

Asked should the Congress declare its candidate for 2022 Punjab assembly election because going by the past trend sometimes the party makes such announcement and sometimes not and last time they had declared Amarinder Singh as CM candidate, Channi replied, "Last time when they had declared Capt (as CM's face) we won and previous time the (CM) candidate was not declared we lost and before that when they gave (CM candidate) we won and when they did not declare candidate we lost"

"This time they should give (declare the CM candidate). (Navjot) Sidhu is also saying that they should declare," Channi said in an interview to a news channel.

Meanwhile, to another question during his interview, Channi claimed that "it will be a one-sided sweep" by the Congress. "We will win the election with an overwhelming majority".

He said he received lots of love and respect from the people of the state.

To a question on some survey which claim he was ahead of others in popularity ratings, Channi said then it means more seats will be impacted in Congress's favour.

When asked if the AAP declares its chief ministerial candidate and names party MP Bhagwant Mann then the popularity of the parliamentarian may soar, Channi said then the same logic will work for him as well.

At the same time, Channi said neither Mann nor he have been declared as chief ministerial candidates by their respective parties.

Asked if his party should declare him as the chief ministerial candidate, Channi replied, "I have never thought about such things. Last time when Partap Singh Bajwa was the state unit chief, I was standing with him against Capt (Amarinder). But going by the voice of people at that time, I told Rahul Gandhi that Capt should be declared candidate and he should be made CM as people are in his favour. They (party) conducted a survey and people wanted him (Amarinder). This time whom people like they will tell and party will go by that".

Replying to a question if people like him, Channi said he loves the people of Punjab and they too love him.

"But whom they want to see as CM, they will tell in survey," he said.

The Congress is yet to announce its CM's face for the next month's polls. If Congress retains power in Punjab, where it faces infighting, Charanjit Singh Channi, appointed the CM after the ouster of Amarinder Singh, is also being seen as a strong contender.

To another question, Channi said the people are happy with the decisions taken by his government which are aimed at welfare of various sections.

He also pointed out that people like a leader who is accessible and grounded.

He said that despite a short time of over 100 days which he got before the Model Code of Conduct came into force, he has worked hard to ensure that decisions of his government make a difference in the lives of common people.

People elect MLAs and in Punjab, they will choose their chief minister as well, not the Congress "high command", the party's state unit chief Navjot Singh Sidhu had asserted on Tuesday.

Sidhu had made the sharp retort amid speculation that the former cricketer is himself eyeing the top post if the Congress wins the next month's assembly polls.

"The people of Punjab will make the CM. Who told you that the high command will make the CM?" he had shot back at a reporter while answering a question on the party's possible pick for the post.