Opposition forces Centre to allow marriage bill to be scrutinised 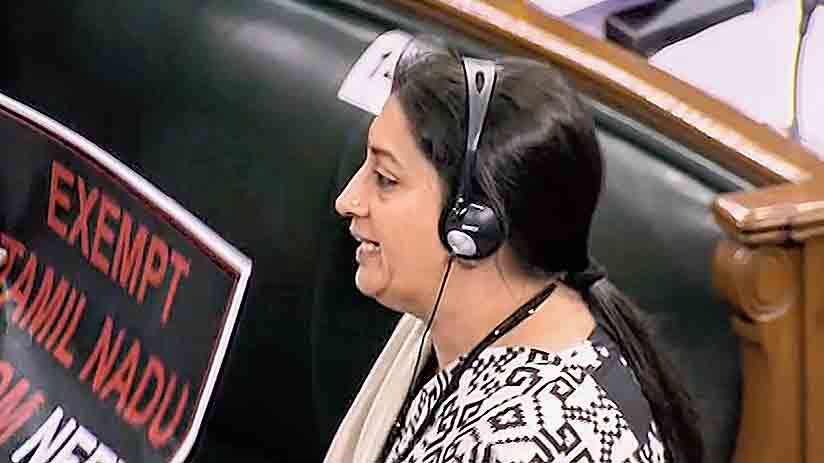 Concerted Opposition protests on Tuesday forced the Narendra Modi government to agree to send to a parliamentary panel for scrutiny a bill seeking to raise the legal marriageable age of women to 21 on a par with men.

Women and child development minister Smriti Irani recommended the Prohibition of Child Marriage (Amendment) Bill 2021 to a standing committee after Opposition MPs, including men and women, stood up one after another to slam the government for once again trying to bulldoze a bill without proper consultation with stakeholders.

The bill, which seeks to override all existing personal laws and religious practices with regard to marriage, is being seen as another politically motivated move by the Modi dispensation under the garb of women’s empowerment and gender parity, reviving memories of the push to make instant triple talaq a criminal offence.

The politics at play was evident in Prime Minister Modi’s comments in poll-bound Uttar Pradesh on Tuesday when he took a dig at his rivals and also appeared to be trying to be using the move as a vote-catcher.

“We are trying to increase the age of marriage of women to 21 years so that they can have time to study and progress,” Modi said at a women-only event in Allahabad. “The country is taking this decision for its daughters. Everyone can see who is having problems with this... it has caused pain to some,” he added.

In the Lok Sabha, after minister Irani stood up to seek leave of the House to introduce the bill, leaders of the Congress, Trinamul, DMK, Left, NCP, Shiv Sena and the Biju Janata Dal, among others, voiced strong opposition.

“A lot of discussion is going on in India in this matter. The government has neither spoken to any stakeholder nor consulted any state. We demand that the bill be sent to a standing committee,” Congress’s leader in House Adhir Ranjan Chowdhury said. He also pointed out that the government had brought the bill through a supplementary business list without any discussion with the Opposition.

“I oppose the way in which the government has brought this bill. It needs more consultation with the stakeholders,” Trinamul’s Sougata Roy said, adding that the “minority people are totally opposed to the bill”.

“It’s the second or third time consecutively they are aggressively bringing bills and nobody from the Opposition is consulted,” the NCP’s Supriya Sule said. “If you want to empower people, you must consult all stakeholders,” she added.

The DMK’s Kanimozhi pointed out that there were sharp divisions for and against the bill and more consultations were needed.

“There are people who support this bill and there is lot of opposition also,” Kanimozhi said, asking that it be sent to a standing committee for wide review and also to take into consideration the opinion of civil society.

The strongest opposition came from AIMIM leader Asaduddin Owaisi and IUML member Mohammed Bashir, with both demanding that the bill be withdrawn. They alleged that the bill violates the right to freedom and is an “attack on personal law and fundamental rights of the people”.

“It’s a retrogressive amendment.… An 18-year-old can choose a PM, can have a live-in relationship, have sexual relationship under the Pocso Act, but the government is denying them the right to marry,” Owaisi said.

RSP parliamentarian N.K. Premchandran wondered whether the law can be enforced in a country like India where large sections of women are uneducated and unemployed.
In her reply, minister Irani slammed the Opposition for opposing gender parity, stressing that India was “75 years late in providing equal rights to men and women to enter into matrimony”.

“I want to say that you all are devoiding women of the right to equality under the Constitution and this House cannot be witness to this disrespect to women,” the BJP leader said.

In the end, Irani announced that the government was recommending that the bill be sent to a standing committee but not before flagging the religious angle — the purported political thrust behind the proposed legislation.

“The voices that rose today accepted that the age of marriage should uniformly be applicable across all religions, all castes and all creeds, overriding any custom or any law which seeks to discriminate against women,” Irani said, although none of the leaders who spoke in the Lok Sabha   appeared in favour of the government’s push.

Modi had first announced setting up a committee to recommend the right age of marriage for women in his Independence Day speech last year. The Union cabinet had approved the bill recently.

UP: Modi bid to woo women