UP polls: PM Modi transfers Rs 1,000 crore to bank accounts of self help groups in Prayagraj 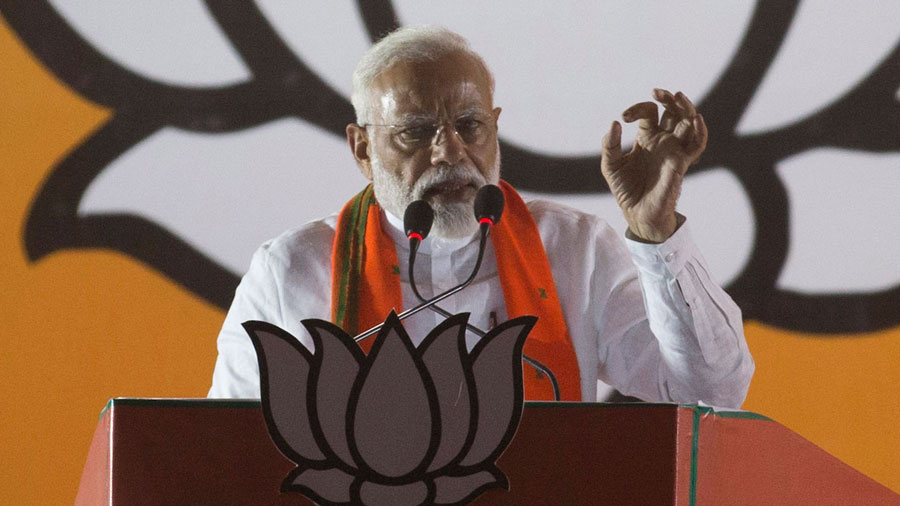 Prime Minister Narendra Modi on Tuesday transferred Rs 1,000 crore to bank accounts of self help groups at a programme here. The aid aims to benefit around 16 lakh women.

The amount was transferred under the Deendayal Antyodaya Yojana-National Rural Livelihood Mission (DAY-NRLM).

The mission aims to provide women, especially those at the grassroots, with necessary skills, incentives and resources.

"25 lakh of 30 lakh homes given under PM Awas Yojana registered in name of women in Uttar Pradesh," said Modi at rally in Prayagraj.

The programme, which saw the participation of over two lakh women, was also attended by Uttar Pradesh Chief Minister Yogi Adityanath.

Speaking at the meeting, Modi said, "Till five years ago, there was mafia-raj and goondaraj in Uttar Pradesh. The biggest sufferers were women. But you could say nothing. If you went to police stations, a phone call in favour of rapists and criminals would come. But Yogi has put the criminals in their place."

He also defended the government's plan to raise the age for marriage for women and put it on par with men.

"The Central government has taken a significant step. Earlier, the age of marriage of women was 18 years. But girls also want to have more time to study. That is why we are trying to increase the age of marriage to 21," he said. "If anyone has a problem with that, they (the women) are seeing that too."

Modi also released over Rs 20 crore to more than 1 lakh beneficiaries under the 'Mukhya Mantri Kanya Sumangala Scheme', which provides conditional cash transfer to a girl child at different stages of her life.

The total remittance is Rs 15,000 per beneficiary.

The prime minister also laid the foundation stone of 202 supplementary nutrition manufacturing units in 43 districts. These units are being funded by SHGs and will be constructed at a cost of around Rs 1 crore a unit.

These units will supply Supplementary Nutrition under the Integrated Child Development Scheme (ICDS) in 600 blocks of the state, the PMO said in its release.

The program also witnessed the prime minister encouraging Business Correspondent-Sakhis (BC-Sakhis), by transferring Rs 4,000 as the first month's stipend in the account of 20,000 BC-Sakhis.

When B.C.-Sakhis commence their work as providers of doorstep financial services at the grassroot level, they are paid a stipend of Rs 4,000 for six months, so that they get stabilized in their work and then start earning through the commission on transactions, the PMO informed.