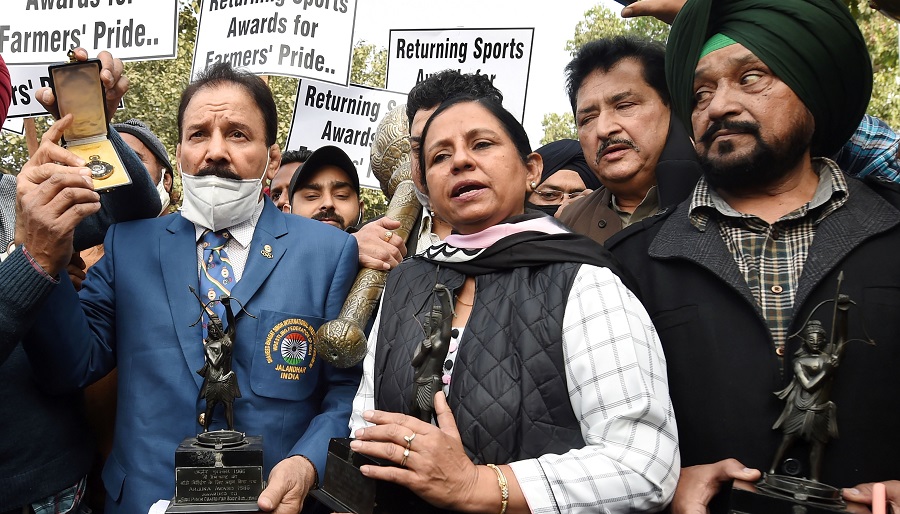 Led by two-time Asian Games gold-winning former wrestler Kartar Singh, a few sportspersons from Punjab on Monday marched towards the Rashtrapati Bhavan to return "35 national sports awards" in a show of solidarity with farmers agitating against new agriculture laws but were stopped midway by the police.

Kartar, who received the Arjuna award in 1982 and Padma Shri in 1987, was accompanied by Olympic gold-winning former hockey player Gurmail Singh and former women's hockey captain Rajbir Kaur among others. While Gurmail is a 2014 Dhyanchand awardee, Rajbir was bestowed the Arjuna in 1984.

"The farmers have always supported us. We felt bad when we saw that our farmer brothers were lathicharged, roads were closed. Farmers are sitting on streets in the bitter cold for their rights," said Kartar, gold medallist in the 1978 and 1986 Asian games.

"I am a farmer's son I still do farming despite being IG, Police," he added.

The athletes, who reached Delhi on Sunday, began their march from the Press Club of India but were halted near Krishi Bhavan by the police and sent back.

"I would like to request the government to repeal the draconian law. When the entire country was shivering for the fear of corona, they passed the bill in both houses and got it passed from the President," Kartar said.

"I agree there is a need for change in farm laws but when our children are not happy, the government's priority should be to make them happy...Why is the government forcibly trying to push the farmers into accepting the contentious bill?" he asked.

The Indian Olympic Association offered its first comments on the sportspersons' involvement in the protest, urging them to have faith in the government and to treat their national honours and the agitation as "two separate things."

"Off late sportspersons are seen to be announcing return of their National Awards as a mark of their support for the recent farmer's issue. National Awards and farmers issue are two separate things," IOA President Narinder Batra and Secretary General Rajeev Mehta said in a joint statement.

The marching athletes claimed to have the support of several Arjuna and other national sports awards winners.

Thousands of farmers from Punjab and Haryana are camping at various Delhi border points for over a week, protesting against the new farm laws, which they claim will dismantle the minimum support price system, leaving them at the "mercy" of big corporate houses.

Farmers' concern is that these laws, aimed at reforming the sector, will eliminate the MSP and mandis that ensure their earning. But the government says the MSP system will continue and the new laws will give farmers more options to sell their produce.

The government is holding talks with farmers, who have called for a 'Bharat Bandh' on December 8, supported by various political parties.

Noted Punjabi poet Surjit Patar announced on Monday that he will return his Padma Shri award in support of farmers who are protesting against the Centre's farm laws.

In a statement, Patar said he was pained at the insensitive attitude of the central government towards the demands of farmers who have been protesting peacefully.

The 75-year-old said he has decided to return his Padma Shri award with a heavy heart. Patar had received the Padma Shri in 2012.