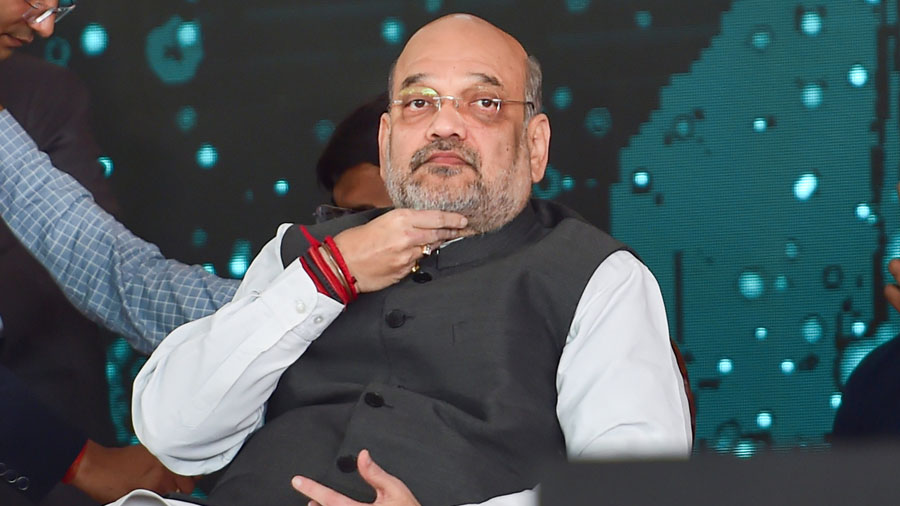 Union Home Minister Amit Shah on Tuesday advocated pro-active coordinated counter-terror operations in Jammu and Kashmir as he held three back-to-back meetings to review the situation there as well as arrangements for the forthcoming Amarnath Yatra and asked security forces to ensure zero cross-border infiltration to wipe out terrorism in the union territory.

The marathon meetings held by the home minister came in the backdrop of recent targeted killings in the valley which included a Kashmiri pandit Rahul Bhat, who was gunned down by terrorists last week.

During the meetings, which was attended by Lt Governor of JK Manoj Sinha, police chief Dibag Singh and other top central and union territory officials, Shah was informed that this year's 42-day-long yatra, beginning on June 30, will have a Radio Frequency Identification Card (RFID) for every pilgrim besides an insurance cover of Rs 5 lakh.

While Sinha was present in all the three meetings, National Security Advisor Ajit Doval and Army Chief Gen Manoj Pande attended the meetings to discuss the security situation in the union territory.

An official spokesman in a statement said the home minister directed security forces and the police to conduct coordinated counter-terrorism operations pro-actively.

The home minister said in order to fulfil Prime Minister Narendra Modi's vision of a prosperous and peaceful Jammu and Kashmir, security forces should ensure zero cross-border infiltration to wipe out terrorism in the union territory.

In another statement, the spokesman said the JK chief secretary informed the meeting that each pilgrim will be provided with a RFID and will be insured with Rs 5 lakh. Earlier, RFID was provided to vehicles only.

Shah said a "hassle-free" journey for the pilgrims is a priority of the Modi government and directed that all arrangements, including additional electricity, water, and telecom facilities be made.

He also stressed for enhancement of mobile connectivity along the yatra route as he directed that earth moving equipment should be placed at vantage points to clear the route in case of landslides.

This is the first yatra after the COVID-19 pandemic and due to the high altitude, adequate arrangements will have to be made for yatris who have any health-related problems, he said.

The home minister asked for an adequate number of oxygen cylinders, medical beds at an altitude of more than 6,000 feet and deployment of ambulances and helicopters to deal with any emergency medical situation.

All categories of transport services should be increased during the Amarnath Yatra for the convenience of passengers.

During the meeting, it was also decided to enable WiFi hotspots to ensure connectivity throughout the 39 km of the yatra route from Pahalgam in south Kashmir. The other route is through Baltal in central Kashmir where a pilgrim treks for nearly 15 km.

The yatra, which presents a big security challenge for the government, could not take place in 2020 and 2021 due to the coronavirus pandemic and was cut short in 2019 just before the abrogation of Article 370.

About three lakh pilgrims are likely to take part in the pilgrimage that is expected to end on August 11.

About 12,000 paramilitary personnel (120 companies) in addition to Jammu and Kashmir Police are expected to be deployed along the two pilgrimage routes, one from Pahalgam and the other via Baltal, officials said.

Drone cameras will help the security forces to ensure the protection of the pilgrims.

Besides the Amarnath pilgrimage, the meetings also reviewed the security arrangement especially in the wake of several targeted killings, including of Kashmiri Pandits, in Kashmir.

There has been a spurt in attacks on non-Muslims and outsiders living in the Kashmir valley since the abrogation of Article 370 of the Constitution in August 2019 which accorded special status to Jammu and Kashmir.

The security review comes following a spate of killings in the union territory.

On May 12, Bhat, a government employee, was killed by terrorists inside his office in Budgam district. A day after, police constable Reyaz Ahmad Thokar was shot dead by terrorists at his residence in the Pulwama district.

Also last week, four pilgrims were killed and at least 20 injured when the bus they were travelling in caught fire near Katra in Jammu. Police suspect a sticky bomb might have been used to trigger the fire.

Bhat's killing triggered protests by members of the Kashmiri Pandit community who staged protests in the Valley demanding enhanced security and transfer of government employees to safer locations.

On Sunday, the Peoples Alliance for Gupkar Declaration (PAGD), a conglomerate of major J-K parties, urged Kashmiri Pandit employees not to leave the Valley as it was their home and it would be painful for all.

Top officials of the ministries of health, telecom, road transport, civil aviation and IT took part in the meeting to discuss logistics for the annual pilgrimage to the cave shrine dedicated to Lord Shiva at an altitude of 3,888 metres.