Advertisement
Home / India / Alliances are raining down on poll-season Bihar

Alliances are raining down on poll-season Bihar

Politics of opportunism blamed for plethora of groups 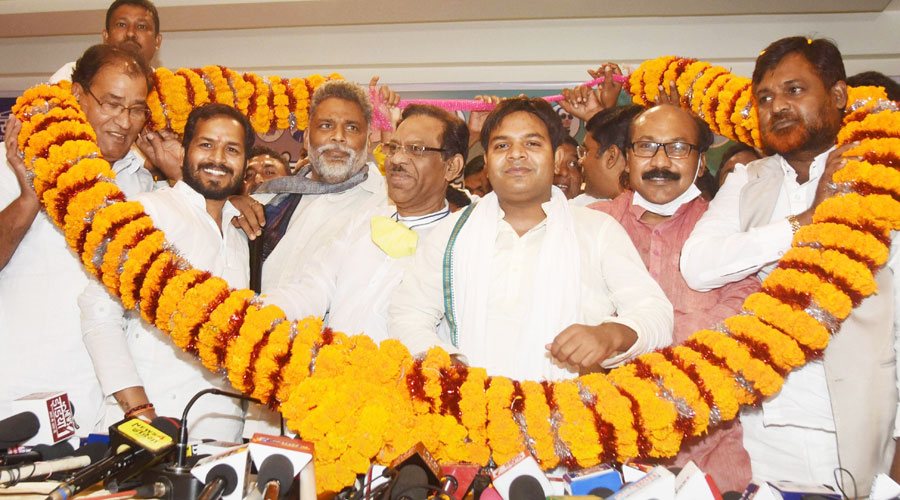 Jan Adhikar Party chief Pappu Yadav being felicitated along with Washim Naiyar Ansari, chief of Ansari Mahapanchayat and others after their alliance for the upcoming Bihar Assembly elections in Patna.
PTI
Dev Raj   |   Patna   |   Published 02.10.20, 03:04 AM

Alliances are sprouting like mushrooms in poll-bound Bihar. The state has never before witnessed so many tie-ups in any elections.

Four new alliances have come up in the recent weeks, while a couple more are expected to be constituted in the coming days, indicating a churn in state politics. At present, there are six alliances contending to attract the voters.

However, four new alliances have come into existence since then.

Then, former Union minister Upendra Kushwaha led his Rashtriya Lok Samta Party (RLSP) into an alliance with former Uttar Pradesh chief minister Mayawati’s Bahujan Samaj Party (BSP). A lesser-known Janwadi Socialist Party is also a partner. The alliance is yet to be given a formal name.

Former BJP leader Yashwant Sinha is heading a 20-party United Democratic Alliance. Several individual leaders, who were popular among the masses at one time or another, are also with this alliance of smaller parties, which intends to contest all 243 Assembly seats in the state.

Though boasting of several parties as members and a few senior, well-known politicians, the new alliances cannot be said to present a strong alternative to the NDA or the Grand Alliance.

Taking the 2015 Assembly election results and the performance of political parties into account, each of the newly formed alliances have less than 5 per cent votes with them.

Taking into account the vote percentage of the individual parties in the previous Assembly elections, the NDA has a claim on 45 per cent of votes, while the Grand Alliance has a share of around 27 per cent votes. However, these two major alliances have seen upheaval in the recent years with Nitish’s JDU quitting the Grand Alliance to join the NDA, and a few other smaller parties changing sides.

Political analysts are viewing this as a manifestation of gross opportunism in parliamentary democracy where politicians are focusing on politics without principles and ideology and treating it as a career option.

Former director and professor of Patna-based A.N. Sinha Insitute of Social Studies, D.M. Diwakar, said: “The new alliances are an example of politics without principles and how parties without a strong set of ideology find it easy to shift from one side to another. The leaders who formed these alliances did so when they did not get a place in the NDA or Grand Alliance as per their fancy.”

Interestingly, all the new alliances are clear about one thing. They are against the BJP and the NDA. This will ultimately benefit the party or the alliance they are opposing.

“The BJP or the NDA will benefit from these new alliances because they will divide the secular votes. This scenario will ensure that the present ruling dispensation is able to beat the anti-incumbency factor and return to power. There are indications that BJP’s hand could be there in the creation of some of the alliances,” Diwakar said.

Apart from the six alliances, the Left parties could also form a separate alliance to contest the polls as they are not happy with the seat-sharing proposals of the Grand
Alliance.

Plurals, a party formed in March and led by a London School of Economics passout Pushpam Priya Choudhary, is also in the fray.

The Bihar polls will be held in three phases on October 28, November 3 and 7.

The results will come out on November 10 and they will show the exact influence of the new alliances on Bihar polity and elections.