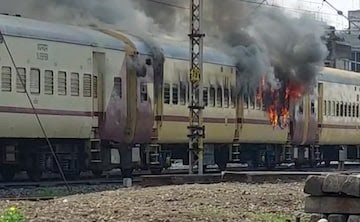 The East Coast Railway (ECoR) has cancelled and short terminated several trains passing through Odisha due to nationwide protests against the 'Agnipath' military recruitment scheme.

No train will be operated at Visakhapatnam station from 6 am to 2 pm on Saturday in view of the agitation, the ECoR said in a release.

The cancelled trains include the Bhubaneswar-Visakhapatnam Intercity Express and Bhubaneswar-Secunderabad Visakha Express.

At least six other trains, including passing-through ones, have been cancelled for agitation at several places. These include the Puri-Patna Express on Saturday and the Puri-Ajmer Express on Monday.

The ECoR partially cancelled at least 10 trains, including the Godavari Express from Hyderabad that will end its journey at Duvvada near Visakhapatnam.

At least eight passing-through train will bypass Visakhapatnam and run via Simhachalam North and Duvvada, it added.

A man was shot dead in police firing in Telangana's Secunderabad, trains went up in flames, and public and private vehicles attacked, railway stations and highways turned into battlegrounds amid burgeoning protests in many states, including Odisha, against the Agnipath scheme.

The Union government had unveiled on Tuesday the Agnipath scheme for the recruitment of soldiers in the Army, Navy and the Air Force largely on a four-year short-term contractual basis.