Party not vocal about protection of minority rights as in 2015 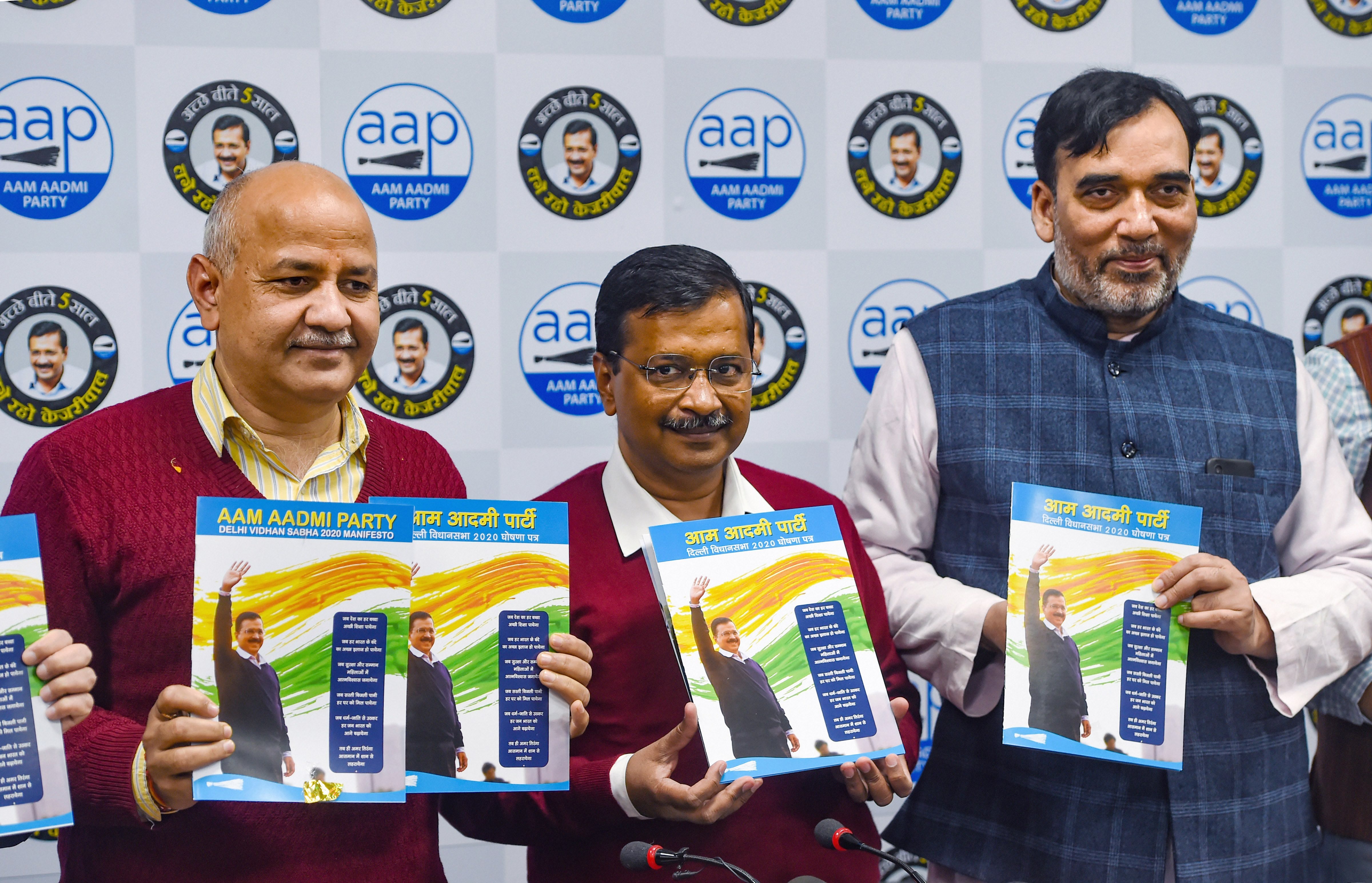 The much-awaited Aam Aadmi Party manifesto, released on Tuesday, is short on the number of promises compared to its 2015 document, but is focused on the concerns of the time, promising as it does to serve and uphold the values of the Constitution while talking of a nationalism course in government schools.

Yet, it chose to do away with a categorical assurance of being committed to the well being of minorities as it had done in 2015 when it spoke out against attacks on places of worship and inflammatory speeches.

The party manifesto of 2015 elections had a 70-point action plan.

AAP’s top three promises this time are a Delhi Jan Lokpal bill, a Delhi Swaraj bill and doorstep delivery of ration. While the promise of doorstep ration delivery is new, Jan Lokpal and Swaraj bills were part of the 2015 manifesto as well.

“The vision to make our Delhi a modern city and an advanced capital has come out in our work of the last five years and in the template visible in this manifesto,” Sisodia told the media.

To counter the BJP’s rhetoric on nationalism, the 2020 manifesto starts with a vow to “serve and uphold, JUSTICE, LIBERTY, EQUALITY, FRATERNITY enshrined in the PREAMBLE to the Constitution of India”.

The fifth point on the manifesto is on a “deshbhakti curriculum”, the party’s plan to introduce a nationalism course in Delhi’s government schools.

Sisodia said the next Kejriwal government guarantees to provide good education to every child in Delhi, better healthcare to its people and 24-hour supply of pure water. It also promises to reduce pollution levels to one-third its current level.

A list of assurances featured in the 70-point action plan has found place in the new manifesto as well. Promises of reviving the Yamuna and developing the riverfront, justice for victims of 1984 Sikh riots, and regularisation of unauthorised colonies are among those that have been included in the manifesto.

Specific assurances for women of Delhi, mentioned in the last manifesto, are missing this time. While the government can claim it has worked on several promises, like installation of CCTV cameras, street lighting and connectivity, the capital is far from being a safe city for women.

Development and equality for all minorities, a topic that found prominent mention in the 2015 manifesto, is missing this time. “The recent communal tension witnessed in Delhi is totally out of sync with the social fabric of the city. We stand firmly against attacks on places of worship and inflammatory speeches across Delhi,” the party had said in clear terms.

But this year, when inflammatory speeches and targeting of a minority community continues, AAP has taken off the assurance from the new manifesto.

Referring to the manual scavenging deaths, the 2020 manifesto commits to compensate families of deceased safai karamcharis with Rs 1 crore. The party also said it would appointment new conservancy workers as per the 2011 census.

It, however, omitted the promise of “protective gear, masks and appropriate equipment” for them made in the last document.