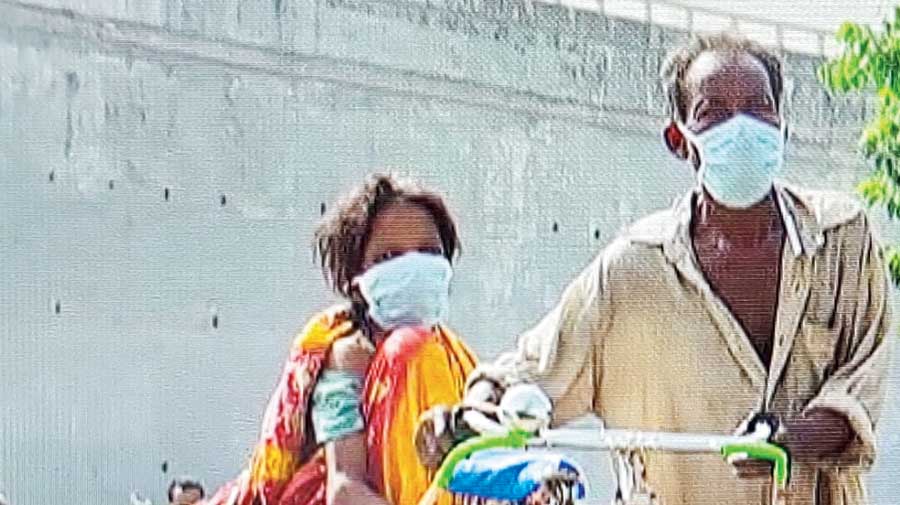 A 61-year-old villager pedalled a trolley rickshaw for 90km carrying his wife to a city hospital because he couldn’t afford an autorickshaw and was unable to call a government ambulance since he has no mobile.

Rag-picker Kabir Bhuin, who pedalled the rented three-wheeler for more than 14 hours from Sakhigopal in Odisha’s Puri district to Cuttack, got wife Sukanti admitted to the SCB Medical College and Hospital on Saturday morning with help from some local people.

Sources said Kabir had a week ago admitted Sukanti to the local community health centre in Gopinathpur, Puri district. Before her discharge, the doctor there informally advised Kabir to take her to the SCB Medical College, saying she had multiple ailments that might include cancer.

Neither did the health centre make an official referral, nor did it arrange for a free government ambulance to take Sukanti to Cuttack, the sources said. When Sukanti’s condition worsened on Friday morning, Kabir decided to take her to Cuttack himself.

“The local autorickshaw demanded Rs 1,200, which I couldn’t afford. So, I rented the trolley rickshaw at Rs 50 a day,” Kabir told reporters in Cuttack.

Kabir set off from his home at 9am on Friday and reached Cuttack’s outskirts around 11pm. When, after a night’s rest, he resumed his journey towards the medical college hospital, some people came forward to help.

“We noticed the poor man ferrying his wife in the trolley rickshaw, and some of us decided to help him,” social activist Abhimanyu Das told The Telegraph.

He said Kabir had been nursing Sukanti, who was suffering from stomach pain and vomiting, for the past one year. He had taken her to hospitals in Bhubaneswar and Puri town during pre-pandemic times when buses used to run.

“I’m trying my hardest to give her the best treatment I can,” Kabir told local reporters.

He said he used to earn about Rs 200 a day before the lockdown reduced his income.

Das said: “Kabir told us he had none to help him. He arrived here without even a spare sari for his wife. His wife’s arms and legs are swollen and she cannot even stand, let alone walk.”

“We’ll do an ultrasound and X-ray. There’s strong suspicion of malignancy. If necessary, we’ll refer her to the Acharya Harihar Institute of Cancer (in Cuttack),” he said.