Was the rest of Into The Wild, in which the Bollywood Khiladi hopped, skipped and jumped through the Bandipur Tiger Reserve and National Park in Karnataka with ace survivalist Bear Grylls, just as er, interesting? 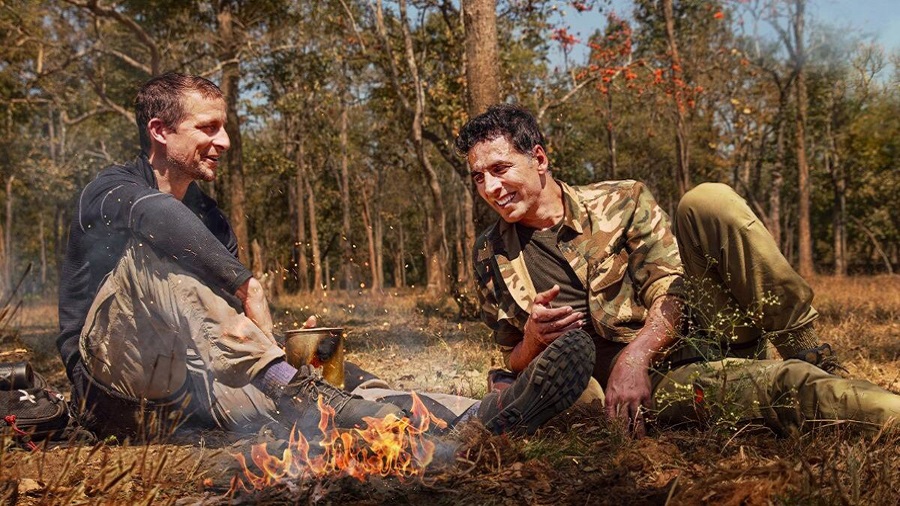 Akshay Kumar and Bear Grylls talk life and family in between sips of ‘elephant poop tea’ in Into The Wild
Sourced by the Telegraph
Priyanka Roy    |   Published 14.09.20, 09:38 PM

I cringed when I watched Akshay Kumar down ‘elephant poop tea’ with the enthusiasm of a boy scout in the trailer of Into The Wild. Then a day before the episode dropped, the man, gummy smile intact, confessed that he guzzled down cow urine every morning “for ayurvedic reasons”, and suddenly, elephant poop tea didn’t seem so bad any more.

Was the rest of Into The Wild, in which the Bollywood Khiladi hopped, skipped and jumped through the Bandipur Tiger Reserve and National Park in Karnataka with ace survivalist Bear Grylls, just as er, interesting? Here are our major takeaways...

Did Bear Grylls, the foremost name in adventure and survival in the world, ever think he would be referred to as ‘Bhaloo?!’ Well, that’s what was in store when Akshay, given a set of coordinates and a map to track down Bear in the middle of the forest, went, ‘Kahaan gaya yaar Bhaloo?’ Akshay, whom Grylls addressed with the far more cool-sounding AK, stuck to ‘Mr Bear’ for the remainder of the episode.

Into The Wild may have had Narendra Modi and Rajinikanth as guests, but truth be told, Akshay, one of the fittest men around, is a natural fit for a show like this that tests tenacity and gut to the ultimate. Right from the moment he jumped off the jeep to follow Grylls into the wild (for their “classic military-style mission”) to when he swiftly climbed a tree using a makeshift harness that he learnt to make on the spot, the Khiladi was the right man for the job. His agility prompted Grylls to go, “It’s great to do this journey with someone who is physically capable and strong”. At the end of the episode, Grylls referred to the man as, “AK the legend”.

If one expected the episode to be all action, there were a few surprises. Akshay, otherwise a man of few words, got talking with Bear, with the two men exchanging their stories of success and failure. They bonded on their “bottom of the class” accounts, with both confessing that academics wasn’t their strong point. Bear took it a notch further by revealing his ‘name’ in class — ‘GTF’ aka ‘General Total Failure’!

It was the fun messages from friends and family that Bear whipped out of his iPad at regular intervals, that gave the show its colour. First up for Akshay was a video message from wife Twinkle Khanna who, in keeping with her trademark humour, took all the credit for her man’s legendary fitness, and then told Grylls, “Bear, you have my monkey...  go ape!”

Popping up next was a surprise appearance by Suniel Shetty, Akshay’s co-star of many films, who described the 53-year-old superstar as “fearless and inspirational”.

Bringing up the rear was a sunshine-y moment from Katrina Kaif who said that if she trusted any man to ace the Into The Wild journey, it had to be Akshay.

Perhaps the most memorable bit of the 43-minute episode was Akshay and Bear stumbling upon some elephant waste and deciding to not only use it to light a fire, but in an ‘eeewww’ moment of epiphany, boil the poop to make a version of tea! AK cluelessly standing with two lumps of poop in his hands was definitely the moment of the episode, followed by him downing the ghastly concoction and going, “That’s really nice!” This, even as Bear — who has guzzled down everything from a rat boiled in his own urine to a raw snake — said it “wasn’t great”.

Somewhere in the episode, AK also pitched in with his own snack for Bear —“ayurvedic balls” made of apricot tree gum. No, they didn’t down shots of cow urine with it.

What else went into Akshay’s day of adventure in the wild? Ziplining above a river infested with crocodiles, quietly wading through water so as not to disturb a herd of elephants and then surprising Bear by making his climb using a rope ladder to get to the bridge above seem like a cakewalk. The expected sign-off from AK? “I would do this every day!” Well, we don’t doubt that.