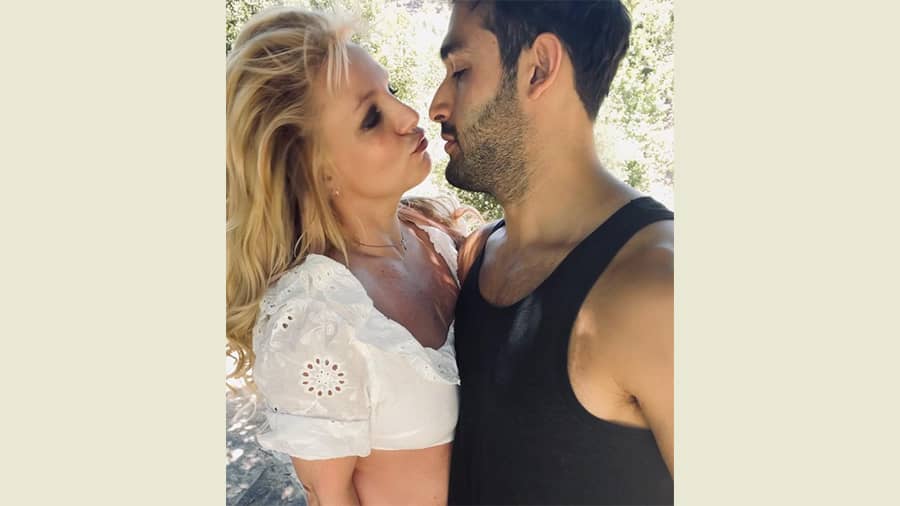 Britney has finally tied the knot with her long-term partner despite interruptions by her ex-husband.
@britneyspears/Instagram
Entertainment Web Desk   |   Calcutta   |   Published 10.06.22, 04:13 PM

Princess of pop Britney Spears is now officially married to her partner Sam Asghari. The two had a small, “secret” wedding on June 9 at Britney’s home in Los Angeles, but not without the kind of drama that is every bride’s nightmare.

While a short list of celebrities including Madonna and Drew Barrymore were spotted arriving at the venue, the bride’s ex-husband Jason Alexander was an unwanted party-crasher. Following an altercation with the security, he was reportedly arrested for trespassing, vandalism and two counts of battery.

Jason chose to stream his actions live on Instagram as he resorted to breaking and entering. In the video, he’s seen approaching Britney’s house in Los Angeles. He managed to get past two security personnel before entering the house and finally the tent where the wedding was to take place.

He kept asking where his ex-wife was and claimed that he had been invited there. The live video ended with him being physically restrained by the security.

Jason is Britney’s first husband whom she married in 2004. The two were childhood friends. When the pop star married Jason, it made headlines not only because it was a spur-of-the-moment Las Vegas wedding but because it lasted only 55 hours. The couple’s marriage was annulled after a petition was filed stating that Britney did not have an understanding of her actions. Britney eventually went on to marry Kevin Federline the same year.

It is not known if Britney continued communications with Jason. However, in 2020, Jason was seen outside the Los Angeles courthouse where Britney’s trial on her conservatorship was taking place. He offered his support for his ex-wife and claimed that the two had been in touch.

The beloved ’90s pop star, who has reigned on social media as the face behind the #freebritney movement, reclaimed her personal life after the problematic conservatorship that had been calling the shots in her life was terminated in 2021.