All that you need to know about a new platform that is the flavour of many graduate schools in the US, pitalls notwithstanding 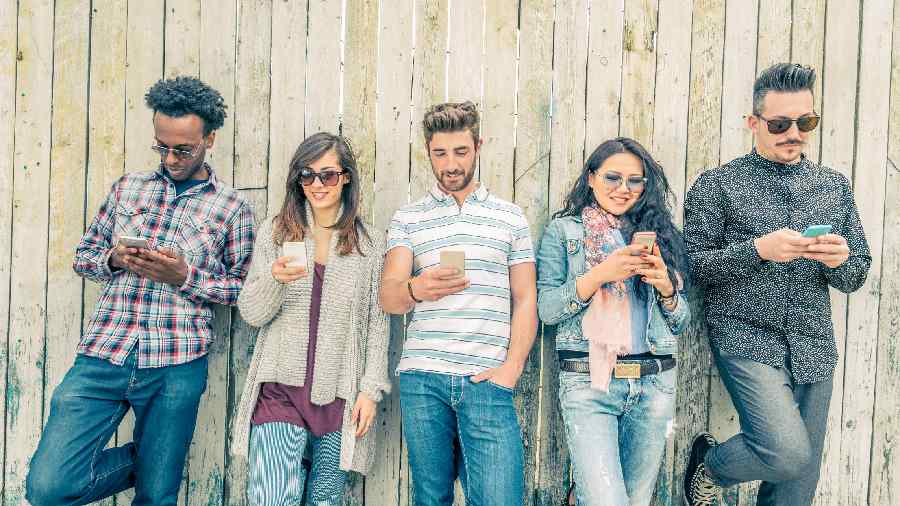 In recent months, Sidechat, a buzzy new app, where users log in with university-affiliated email addresses and write anonymous posts that are visible only within their school community, has racked up downloads at American universities including Harvard, Cornell, Tufts and Columbia.
Shutterstock
Anna P. Kambhampaty   |   Published 28.06.22, 02:40 AM

Yousuf Bakshi, a junior at Harvard, US, recalled getting in line at El Jefe’s Taqueria at 2 am in Cambridge, Massachusetts, US, to grab a late-night snack. Bakshi, 20, couldn’t help noticing that nearly everyone ahead of him in line was on their phones, all scrolling through the same app: Sidechat.

“It’s an easy place to see all the jokes and gossip, and it really helps foster a lot of talk of the town,” Bakshi said, comparing the app to Lady Whistledown’s gossip column in the Netflix series Bridgerton.

In recent months, Sidechat, a buzzy new app, where users log in with university-affiliated email addresses and write anonymous posts that are visible only within their school community, has racked up downloads at American universities including Harvard, Cornell, Tufts and Columbia. Campus newspapers have documented the app’s fast-paced growth. In March, The Cornell Daily Sun wrote that “the app has quickly become a hallmark of Cornell social life”. In April, The Harvard Crimson reported that Sidechat “is taking campus by storm”.

The premise isn’t new but is irresistible for many students: an opportunity to chat about what’s happening on campus with peers, without having their names attached to what they say. Posts go live without any prior approval and are only removed later if a message is deemed to be in violation of platform guidelines. While some students find the secrecy to be harmless fun, others seem to be emboldened by the anonymity and, as is common online, post caustic and hurtful comments. Now, some students, many already jaded by past experiences with similar platforms, say they are souring on Sidechat, but they are still signing on.

“It is fun to just post memes and relatable things without having your identity revealed,” Bakshi said.

The founders of Sidechat have remained anonymous. A representative for the company, who did not disclose their name, said the founders would not comment for this article.

For years, students have flocked to anonymous confessions pages on Facebook and Instagram (Harvard Confessions or Tufts Secrets, for example) where they can submit posts that are then approved and posted by a moderator.

Formspring became popular in the early 2010s for allowing users to post questions and answers without having to identify themselves. It was quickly filled with cyber bullies who would post threats and hurtful comments aimed at other teenage users. The site shut down in 2013.

Just last year, Yik Yak restarted after having shut down in 2017. The app had become overrun with hate speech and harassment, and some universities even banned it from their WiFi networks.

“Anonymous apps are notorious for rapidly rising and falling in popularity,” said Ysabel Gerrard, a social media researcher at the University of Sheffield, UK. “They attract a user base far larger and faster than their founders anticipate, leaving staff unprepared for the necessary scale of content moderation.”

But the speed of growth of these platforms, and the controversies around them, can be part of the appeal, she added. “It’s also often the case that teens download new apps in the hopes they’ll be safer than those preceding them,” she said.

Rabiya Ismail, 22, a student at Tufts, said she had downloaded Sidechat after seeing another student promoting it on her class Facebook group. “It started off fun,” she said. “People were just going on to make jokes about campus and post memes.” But just a few weeks later, after seeing that the app had become flooded with hateful posts, Ismail deleted it. She eventually redownloaded Sidechat because she didn’t want to miss out on the positive aspects of campus life it promoted.

Nicholas Gray, 20, a freshman at Cornell, said his biggest complaint about the app was the way it’s moderated. Because the moderators can be students, in his experience, a lot of the posts are “moderated in a superficial manner”, he said.

Harvard, Columbia and Tufts did not respond to requests for comment, and representatives from Brown University and Cornell said the schools had no affiliation with Sidechat.

Students said that it felt as if the app had become popular overnight. Kristin Merrilees, 20, a sophomore at Barnard College in Manhattan, US, which has a partnership with Columbia, said that one day, out of nowhere, she saw that several peers had posted about it on their Instagram stories. She noticed people setting up tables to promote the app on the quad, and an email was sent out to her entire sorority, saying that the group could earn $3 from Sidechat for every member that downloaded it.

The email, which was reviewed by The New York Times, described the app to would-be promoters as “basically like a Columbia-only Yik Yak”.