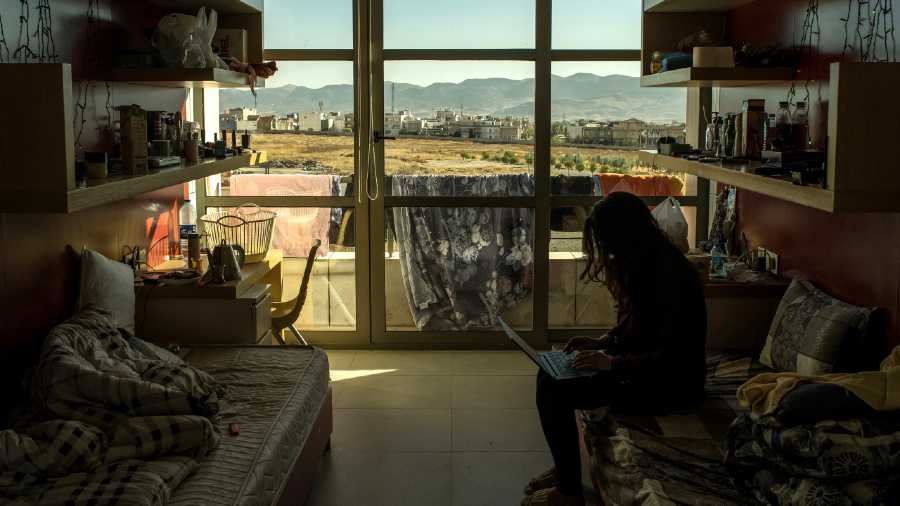 As the Taliban closed in on the Afghan capital, Kabul, in August, what had been a privileged education at the American University of Afghanistan suddenly became a dangerous liability.

Students and staff frantically searched for an escape route from a country that, with the withdrawal of US forces, would fall to the Taliban.

Iraq, though, was not the first destination that came to the students’ minds as a refuge.

“OK, now I’m leaving the Taliban behind,” said Mashall, 24, a master’s student in information technology. “And now I’m going to face ISIS,” she said, describing her concern and using an alternate name for the Islamic State when told her evacuation flight would end up in Iraq.

Those fears have proved unfounded for Mashall and her classmates, who are among the first Afghan students to arrive at the American University of Iraq, Sulaimani. It is located in the Kurdish city of Sulaimaniyah, a liberal metropolis dotted with parks, filled with cafes and restaurants, and considered the safest major city in Iraq.

So far, 109 young Afghans are studying in Sulaimaniyah, a portion of the 300 American University students that are ultimately expected to relocate there. On the university campus, a group of relocated students told their stories.

As the Taliban neared Kabul, Neda, a business student who worked part time at the university, frantically fed documents into a fire on the nearly empty campus. “We tried to burn all the contracts or documents so they could not find the students’ names and addresses,” she said.

The students and staff feared the Taliban would hunt them down along with their families and kill them.

“The Taliban came to an office I was working at,” recalled Murtaza, a law student who was later evacuated. “They wanted to beat us. They called us infidels and American spies.”

That night, as Neda burned papers, the foreign staff at the university had already been evacuated to a British-run security compound near the airport. For almost four hours Neda and a handful of other Afghans threw student records into the fire.

And then it was time to leave for the British compound, in what would become a harrowing journey ending in what many of the students initially considered to be the dangerous destination of Iraq.

Vice-president Victoria Fontan had worked in Iraq and during the pandemic had collaborated with her counterpart in Sulaimaniyah on an online curriculum. When the Kabul university started searching for a place to relocate students, she thought of Iraq, and a network of powerful friends kicked into action.

President Barham Salih of Iraq, the founder of the university and himself a former refugee, pledged to take in up to 300 students and arranged for them to enter without visas or in some cases even passports.

The president of the Afghan university, Ian Bickford, said 106 other students had been sent to the American University of Central Asia in Kyrgyzstan, and about 200 to other countries, including Pakistan and the United States.

Another 375 American University students are still in Afghanistan, along with many more staff and hundreds of alumni, Bickford said. Many are in hiding. Students in Afghanistan still have access to online courses led by teachers now living outside the country. But many of the students no longer have reliable access to the Internet or feel safe to connect, their former classmates said.

Some students, like Neda, are still traumatised by their escape. The British security compound where she was sheltering was taken over by the Taliban, who demanded money and vehicles before they let the occupants leave. Neda was terrified that the Taliban, who later took photos and videos of everyone on the buses to the airport, would recognise they were not foreigners but Afghans.

When they finally arrived at the Kabul airport gate with the foreign staff, she said, British soldiers barred them from entering. Eventually, she made it onto a Qatari evacuation flight.

One of the other students, a political science major named Fatima who plans to be a diplomat, had lived in Kabul for just four years. For years, she and her family were refugees in neighbouring Pakistan, but she had persuaded them to return to Afghanistan so she could pursue her education.

Murtza, 22, a law student who was among those relocated, said he missed Kabul, even with its frequent electricity cuts. “I didn’t feel safe around Kabul,” he said. “But it was my hometown. It was my country. It was my soul, and it was my heart.”