An introduction to climate change fiction, or cli-fi 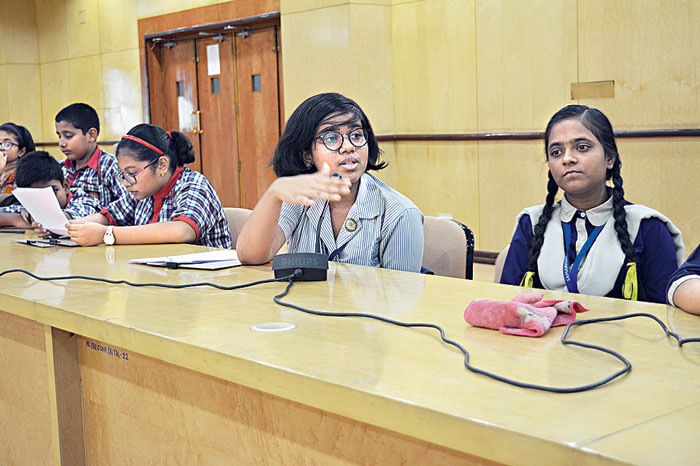 On the occasion of Children’s Day and National Book Week (November 14-20), National Library in Calcutta organised a two-day workshop on cli-fi. Around 40 students of classes VIII to XII from various city schools attended.
Sourced by The Telegraph
Chandana Chandra   |   Published 25.11.19, 03:04 PM

Way back in 2004, Roland Emmerich’s disaster flick The Day After Tomorrow depicted a series of extreme weather events that usher in an ice age. The movie was applauded for its spectacular visual effects — especially the scene showing a tidal wave wash over the Statue of Liberty — but critics slammed it for scientific inaccuracy.

Today, scenes from the movie bear an eerie resemblance to real-life scenarios of superstorms, flooding, droughts and wildfires, giving legitimacy to a new genre of fiction, and films, called climate change-fiction or cli-fi.

On the occasion of Children’s Day and National Book Week (November 14-20), National Library in Calcutta organised a two-day workshop on cli-fi. Around 40 students of classes VIII to XII from various city schools attended. Incidentally, the devastating cyclone Bulbul had just hit West Bengal, Odisha and Bangladesh.

Author Rajat Chaudhuri — who wrote the cli-fi novel The Butterfly Effect — conducted the two workshops on short story writing and climate change fiction. Chaudhuri introduced the participants to the intricacies of story-telling, following which the students wrote and presented their stories in groups. The groups were named after cli-fi authors such as Amitav Ghosh, Cormac McCarthy and Margaret Atwood, among others.

This was followed by an in-depth introduction to climate change fiction. Chaudhuri stressed on the undeniable reality of climate change, supporting it with videos and new findings, including the worrisome news that climate change will severely exacerbate the risk of diseases such as dengue. The various impacts of climate change include hot summers, sea level rise, powerful cyclones, crop failures, migration and species extinction. Chaudhuri quoted studies that say for every half-degree rise in temperature, the probability of armed conflict increases between 10 and 20 per cent. “It’s time fiction writers engaged with climate change in the country. But this is not happening,” he rued.

To illustrate why cultural workers need to engage with the subject, Chaudhuri showed clips from movies such as The Day After Tomorrow, Snowpiercer and Kadvi Hawa. He introduced the children to cli-fi novels such as Mccarthy’s The Road, Liz Jensen’s The Rapture and Ghosh’s Gun Island. Chaudhuri also read from The Butterfly Effect, which is set in a climate-ravaged Calcutta in the near future.

The young audience engaged actively with the subject, asking questions about incorporating climate politics in their writing and the tension between political content and aesthetically pleasing and entertaining prose. Citing the example of Swedish teenager Greta Thunberg, Chaudhuri called upon his audience to impress upon elders the need to change unsustainable consumption habits such as opting for trains instead of air travel and taking up the issue with corporates, politicians and other policymakers.

Arghyadeep Mondal, a Class VIII student of Kendriya Vidyalaya, Fort William, said that it’s the responsibility of the young generation to make people aware of the grim reality of climate change. Sanaya Jhunjhunwala, a Class VIII student of South City International School, expressed her worry about the overall impact of climate change and added that writing fiction based on thorough research can sensitise people about the hard reality. The students suggested that writers must also focus on solutions. Chaudhuri concurred, “There is a need to write more positive stories of change which portray how people can come together to stop climate change in its tracks.”