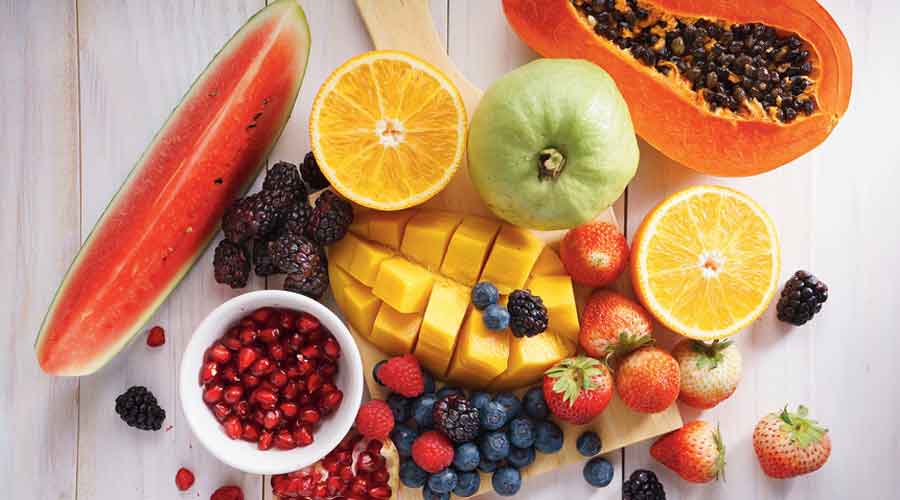 Winters are associated with oranges, apples and grapes and plentiful vegetables, which included but were not limited to fresh green peas, radish, spinach, carrots and beetroot
Vikas Kumar   |     |   Published 29.11.20, 12:20 AM

At the outset, I’d start by wishing all the readers festive greetings of the season, may the almighty grant all of us great joys and memories that we can cherish forever, something that hasn’t been so forthcoming this year round, but we’ll see.

While talking of the season, something unusual happened the other day. I was out shopping for groceries at one of the local supermarkets for the truncated Diwali celebrations at home. While in the fruit aisle, comparing apples and oranges to decide which offered greater VFM, I see a full crate of ripe, yellow, mangoes — in mid-November! I was trying to regain my composure and recover from the loud gasp I had let out and had fellow shoppers look at me funny, my mind was racing to capture the incident of actually seeing plump, ripe mangoes while there is a pronounced chill in the air.

It’s not something I have seen often. A cursory glance at the MRP had my pulse racing even faster. Why would anyone want to have fresh mangoes at the four-figure price a kilogram, in November? Why?

Growing up, mangoes meant summer and invariably the change of seasons brought about a definitive change in diet. From litchi to mulberry, melons to jamun, summers were the time for relishing an abundance of fruits and the larger canvas of memories included school holidays, late sunsets and generally doing the ‘summer’ things.

Likewise, winters are associated with oranges, apples and grapes and plentiful vegetables, which included but were not limited to fresh green peas, radish, spinach, carrots and beetroot.

Although I have mentioned my specific circumstances here, it is certainly true that anywhere you go in the world, even the places with most moderate climates, there certainly are farm produce that define seasons and people, in general, identify most products with a distinct period of the year. 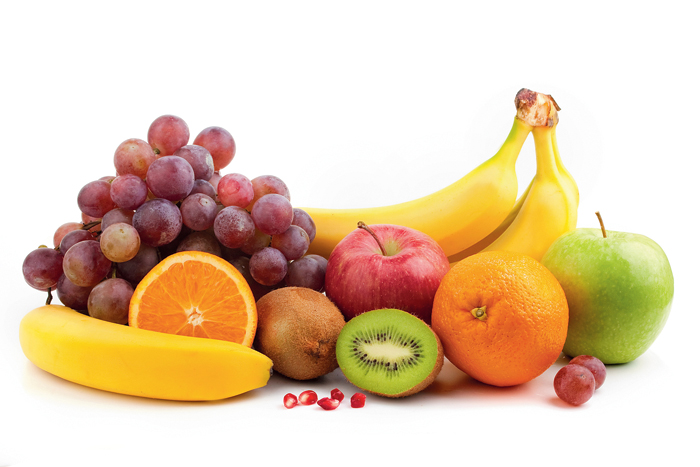 Historically, across the world, the season has defined food habits of people. The starting point might be the multitude of harvest festivals all over the globe, where a bountiful harvest is celebrated along with the change in seasons. Be it the Sankranti in India, the Thanksgiving in the US, the Sukkot of Israel, or the Olivagando of Italy, the celebration of the harvest also generally signifies the change of seasons.

All over the globe, most harvest festivals celebrate and feature the consumption of the new crop of the season, thereby indicating the availability of the seasonal food that is to be available till the next harvest. Although many foods are harvested more than once a year, these also have distinct characteristics of their own and are enjoyed in recipes that are attuned to their usage.

As well as that, especially in countries and regions with cold climates, people begin the process of preserving foods so that they are available in some form or the other the entire year round and also to ensure that the plentiful food does not go to waste. In essence, nature has created food cycles in a way that we enjoy certain foods at certain times of the year. This is what creates balance and harmony. 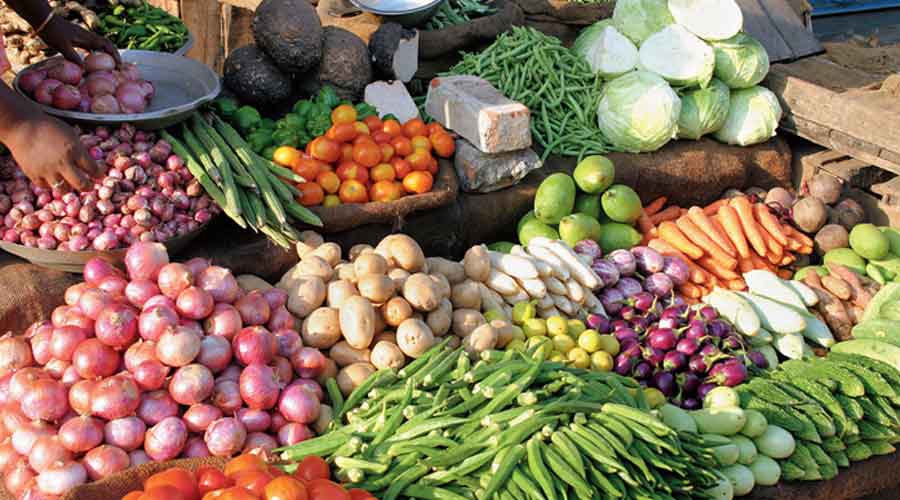 With increasing globalisation, the definition and interpretation of seasonal food depends on who is using the food and in which context. In the Indian context, the seasonality of food is generally also perceived as ‘locally produced’ food, ‘local’ meaning the larger geographical area. For example, litchis grown in Muzaffarpur will qualify as summer fruit in the entire country, even though many regions might be colder at that time of the year than the coldest it gets in Muzaffarpur in winters.
It might, however, not hold for foods that are grown during the non-season, in climates that are conducive to the growth of such fruits and vegetables but the consumption is associated with a certain season. For example, the cultivation of broccoli in summers.

I know it sounds confusing and it is true that the seasonality, in its truest sense can only be completely applicable in the absence of cultivation, transportation, storage and demand of a certain food product at a certain time of the year, but with the increasing use of technology in agriculture, it is now theoretically possible to have everything, all the time. Hence, those mangoes in November.

Having said this, eating seasonal is also a cultural phenomenon, irrespective of the actual availability of the food item. In a report published on Cambridge.org, it was noted that very few people in the UK choose to eat berries in winters whereas those are available in supermarkets since summers are culturally and historically celebrated as ‘months of fresh berries’.

The whys of the season

Although availability itself is a definitive argument to vouch for eating seasonal, it is also true that there is an increasing trend of eating frozen and preserved foods primarily due to the year-round availability of many erstwhile strictly seasonal produce, generally owing to the factors of exclusivity and demand in the ‘gourmet’ segment of the food market.

Let us put forward a few arguments to advocate the evident logic of seasonal eating and also to see the impact this can have on our health and the health of the environment.

Cheaper: This is a no-brainer really, foods in season are way cheaper than when they are not. Buying things out of season means longer transportation, warehousing and storage as well as increased costs on maintenance of shelf lives. Whereas all of these things are avoidable in themselves, these do contribute to the increased cost price. So, although obvious, eating seasonal is cheaper and you get less bang for your buck for unseasonal produce — and who wants that?

Taste: As a chef, the first thing that attracts me to the seasonal produce is just the sheer difference in taste than when the food item is out of season. The foods in season taste better and have much more flavour and nutrition. Owing to the natural freshness and optimum ripening of the produce, the food tastes far superior and natural.
When fruits and vegetables are picked for transporting over long distances and for storage for the next season, they do invariably lose taste and texture — think of the limp cauliflower or the tasteless spinach in summers.

Good for the body: Eating seasonal is respecting the cycle of nature and, as a result, has certain clear health benefits. Also, nature has provided for the specific seasonal nutritive needs of the body by producing the compatible foods at that time of the year. In winters, foods rich in vitamin C such as oranges and guavas are eaten as they strengthen the immune system against the winter ailments like cold and flu. In summers, when we sweat a lot, diuretics such as watermelon and cucumbers aid the body’s natural response to keep it cool and hydrated. In effect, eating seasonal foods helps the body’s inherent metabolism to be more effective and thereby function better.

Helping the farmers: Eating seasonal is the best and the easiest way to help the farmers, especially the local farmers in your area. During harvest, especially good harvests, the farmers struggle to get good prices for their produce simply since there is not enough demand in the market and they have no means to transport or preserve their highly perishable food stocks. If we eat seasonally and make a conscious effort to replace all our out-of-season foods with seasonal ones, and preserve the extra using our traditional methods of preserving foods such as pickling and drying, we can help the farmers in getting a fair value for their produce, also enabling them to be financially better prepared for the next production cycle.

Good for the planet: While eating seasonal is good for the wallet, it is good for the planet too. Since seasonal and local go hand in hand, eating seasonal also means that your food travels shorter distances and uses fewer chemicals, preservatives and pesticides, thereby reducing the overall carbon footprint. In a country like India, even though urbanisation is happening at a great pace, most big cities and urban centres still have large farmlands and farming communities within a short distance from the city. A conscious effort to eat seasonally can have a great positive impact on the overall sustainability and healthier environment.

Unlike the Western countries where ‘summers are for everything’ in India, I do believe that as far as food is concerned, ‘winters are for everything’. A cursory glance at the resplendent red carrots, the glistening ‘methi’ and the tender green peas can have the strongest cook weak in the knees.

Just the other day, my wife, who herself grew up in a country where it was difficult to get anything fresh outside of summers, excitedly brought a full bounty of vegetables from the local market and asked what we should do with the beautiful produce. I absentmindedly told her: “These things are so fresh, it will be a travesty to kill them by cooking!”
So here I present a dish which uses the bountiful produce of early winters in all its glory, uncooked. Do try it out and feel the freshness and the flavour of the seasonal produce create the magic with my favourite ‘less is more, lesser is even more’ conjecture when it comes to fresh food (see The simplest Salade Caprese with tomatoes, home made mozzarella and winter greens).

The ingredients for this dish are in full glory at this time of the year — beautiful local tomatoes, homemade mozzarella and a vibrant green pesto made with the winter greens and nuts — all hallmarks of the bounties of the season. 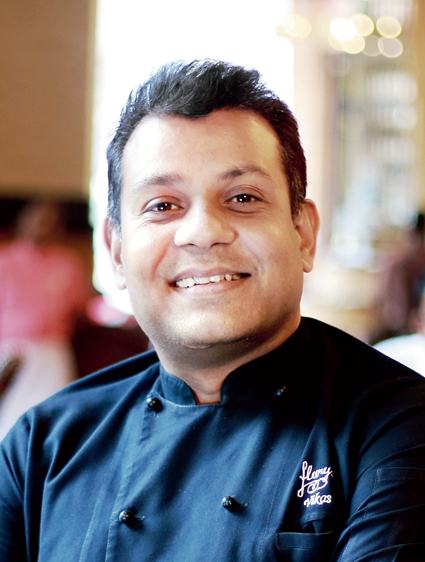 Nature has provided for the specific seasonal nutritive needs of the body by producing the compatible foods at that time of the year. In winters, foods rich in vitamin C such as oranges and guavas are eaten as they strengthen the immune system against the winter ailments like cold and flu. In summers, when we sweat a lot, diuretics such as watermelon and cucumbers aid the body’s natural response to keep it cool and hydrated. 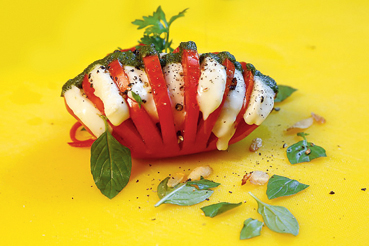 ⚫ Fresh Milk(non-pasteurised, get from the local milkman): 1 litre

⚫ Make the pesto first. Put all ingredients except the olive oil and the cheese in a blender, blend till semi-smooth, add the oil and the cheese, blend to combine. This can be made in advance and stored. Should not be too smooth, but slightly coarse to retain the texture.

⚫Making the mozzarella at home is a little time consuming but not difficult. Heat the milk until very warm but not boiling, add the vinegar slowly while continuously stirring with a spatula. Slowly the milk curds will start to separate. Once separate, gather the cheese ball. Now dunk this ball in hot water multiple times for around 7-8 minutes each time. The leftover whey can be used too. Once the cheese is smooth, dunk into ice-cold water several times, wrap in a cling film and store in the freezer.

⚫ To assemble the salad, slice the tomatoes and the mozzarella and assemble, drizzle the pesto liberally, garnish with some greens and a lashing of cracked pepper and salt. Enjoy with warm bread or just as it is.

Winters are associated with plentiful vegetables which include but are not limited to fresh green peas, radish, spinach, carrots and beetroot.