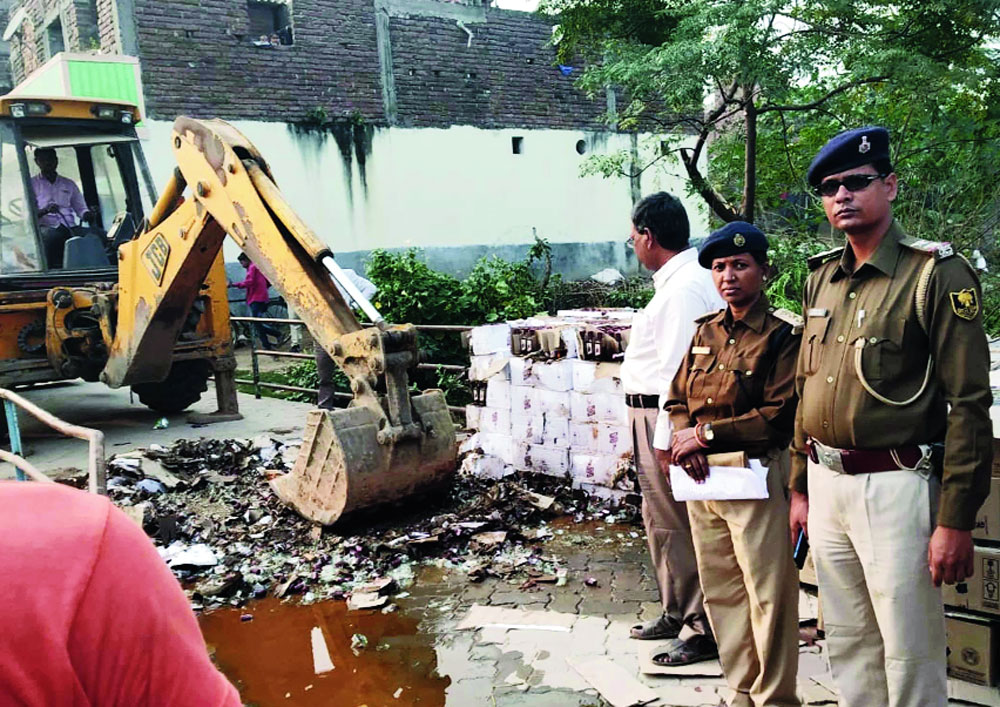 Liquor bottles being destroyed at Nadi Than in Patna’s Fatuha on Tuesday.
Telegraph picture
Our Special Correspondent   |   Patna   |   Published 23.11.18, 10:22 AM

As part of de-addiction day to be observed by the state government on November 26, government schools have been asked to carry out various programmes to create awareness about harmful effects of the use of liquor and tobacco.

The state excise & prohibition department, has written to all district magistrates to carry out various functions marking de-addiction day.

The letter issued by excise commissioner Aditya Kumar Das mentions that on the morning of November 26, all government schools should carry out Prabhat Pheri involving participation of students to create awareness about the harmful effects of use of liquor and tobacco.

Abhishek Kumar, a teacher of Bapu Smarak Girls High School in Rajendra Nagar, said: “We have received a letter from the district administration office to carry out a Prabhat Pheri on the occasion. Students have been asked to prepare banners highlighting the harmful effects of the use of liquor and tobacco.”

The school administration has also been asked to carry out essay competitions on de-addiction. On the occasion, chief minister Nitish Kumar will address the gathering at the main secretariat, while his speech will be relayed across the state through video conferencing. Respective district magistrates have been asked to create facilities for his speech to be heard.

The excise department has also directed district magistrates to include participation of Jeevika, Asha workers and organise nukkad nataks and other events to create awareness about harmful effects of the use of liquor and tobacco.

The state police headquarters on Thursday posted 105 police personnel, including 12 inspectors, 13 sub-inspectors and 11 assistant sub-inspectors in the special prohibition cell under the criminal investigation department to enforce prohibition more effectively.

A Patna police team arrested eight criminals from Patrakarnagar area for selling and supplying smack in Patna schools and colleges. The police seized 1 kg of smack from them.