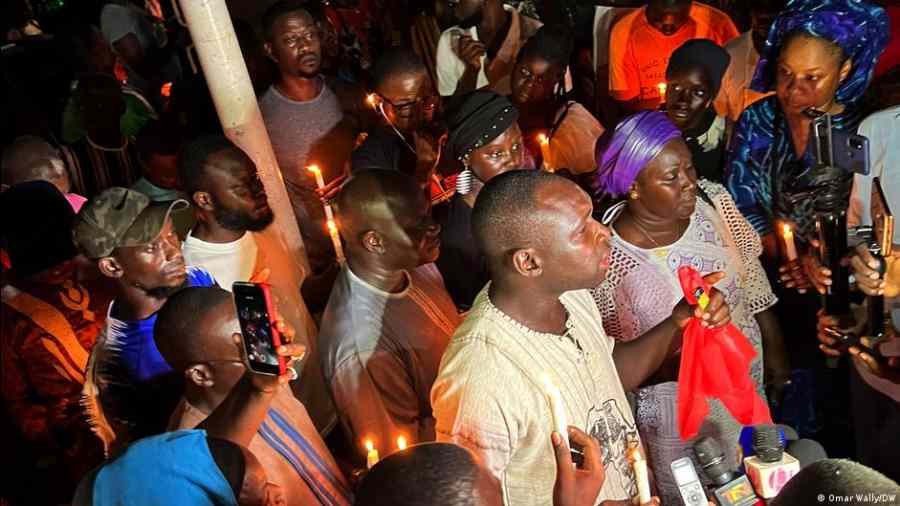 India's medical regulatory body, the Central Drugs Standard Control Organisation (CDSCO), said it had launched an investigation into Maiden Pharmaceuticals, the maker of four cough and cold syrups that the World Health Organization (WHO) said last week might be responsible for the deaths of dozens of children in The Gambia.

Three more children admitted to hospitals for acute kidney injury after taking the syrup died on the weekend, increasing the death toll to 69. Gambian authorities say 81 more children are still in hospital fighting for their lives.

"I don't think such thing should happen in The Gambia," Alasan Kamaso, who lost his two-year-old son Musa, told DW.

Drug regulators from the CDSCO and India's Haryana state government are examining the controlled samples from the batches sent to The Gambia stored by the manufacturers.

As the investigations began in India, many Gambians gathered at a square in SereKunda, outside of the Gambian capital Banjul, over the weekend to mourn the children's death and pray for those still in critical conditions.

"We are having a candle light vigil and a prayer service to make a call to action for the 66 children that died as a result of negligence," rights activist Madi Jobarteh said. Jobarteh blamed the tragedy on the failure of the government to ensure that the systems were working in such a way that it would not have allowed harmful drugs to come in and kill the children.

It took Gambian authorities four days to link the suspicious deaths to kidney injuries after blood samples were sent to neighbouring Senegal. The Gambia does not have testing equipment to detect such cases. Doctors instead treated the children for malaria, asthma, and meningitis.

Last week, the WHO issued an alert against four cough and cold syrups — Promethazine Oral Solution, Kofexmalin Baby Cough Syrup, Makoff Baby Cough Syrup, and Magrip N Cold Syrup — that it says may be highly responsible for the deaths.

As a result, Gambian authorities reacted by retrieving over 16,000 medications, including paracetamols and cough syrups made by the Indian manufacturer Maiden.

According to Kamaso, this was too little, too late. "After the death of the first few children, the government should have taken steps to find out the cause. Instead, it allowed it to go out of control," she told DW.

The WHO report says the children had developed acute kidney injuries due to diethylene glycol poisoning discovered in the four syrups. "The four syrups have been sent for testing to a regional drug testing Lab in Chandigarh. The results of which will guide further course of action," an Indian health ministry official told DW.

Some Gambians have criticized President Adama Barrow for "downplaying" the death of the children. Speaking on national television, Barrow said the deaths of the children were not so different from the country's infant mortality rate last year. However, his office was quick to do damage control by saying the president was explaining disease patterns and was not insensitive to the loss of lives.

"I believe that the president's address to Gambians should have been an assurance of commitment and will owed to Gambians to take full responsibility of his government's act of negligence causing the death of at least sixty-six children," Lamin Fatty, the national coordinator of CPA, said.

Many residents now demand strong retribution against government officials who failed to react on time and the businesses that imported the drugs.

Opposition political Nenneh Fred Gomez wants punishment for those responsible because "incompetence and lack of concern led to the death of these vulnerable children."

Kamaso, who lost his son, wants justice and more action to prevent a crisis described as a national tragedy. "Let the government screen all drugs coming in to the country and scrutinize the people it issued import licenses to," Kamaso stressed, adding that human life is expensive. "No one can buy human life."

In 2022, 17 children died in two Indian regions — Jammu and Kashmir — after consuming syrup with high levels of diethylene glycol. After this incident, India phased out cough syrups in favor of suspensions that do not carry the risk of containing the toxin. A preliminary inquiry revealed that Maiden Pharmaceuticals manufactured the four cough syrups only for export to The Gambia.

Maiden Pharmaceuticals' director Vivek Goyal said they have been 'diligently following the protocols of health authorities, including the CDSCO, and the state drugs' controller of Haryana.'

"We are shocked to hear the media reports regarding the death and are deeply saddened by this incident," Goyal said.

It is not the first time Maiden Pharmaceuticals has faced queries for its drugs. The company has been accused of producing poor-quality medicines in seven states in India, including Kerala, Gujarat, Jammu, Kashmir, and Bihar.

In 2015, the Gujarat authorities flagged its manufactured Macipro, a drug that contained the popular antibiotic ciprofloxacin, which also failed the dissolution test. In 2014, it was one of 39 Indian drug companies blacklisted by Vietnam for quality issues.

According to a CDSCO survey in 2014-2016, about 5% of Indian drugs, several of them manufactured by large pharma companies, failed the quality test. However, independent studies suggest that this figure could be much higher.

Indian experts say that if the link between the deaths of children and cough syrup is established, the company's executives could face a punishment of at least ten years in prison.