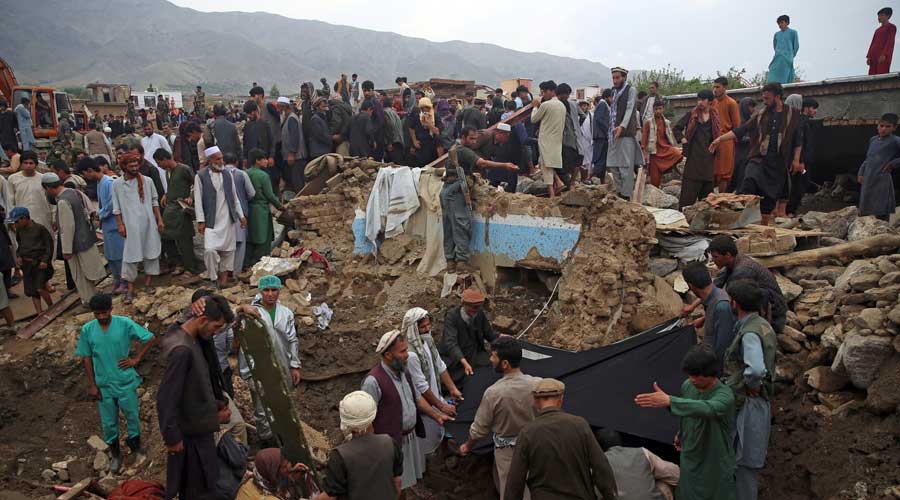 However, it is unclear how equipped the Taliban are to deal with emergencies in areas under their control, which are mostly rural areas.
File picture from NYTNS
AP   |   Kabul   |   Published 30.07.21, 01:46 AM

Flash floods killed 150 people in a remote area in Afghanistan’s mountainous northeastern Nuristan province controlled by the Taliban, a spokesman for the insurgents said Thursday. The provincial government appealed to the Taliban to allow rescue teams into the area to help.

In a statement, Mujahid said the insurgents ordered their own rescue crews to the affected area. He also said the Taliban have also ordered that 5 million Afghanis — or about $62,000 — be spent aiding the clean up and the villagers affected by the flooding.

However, it is unclear how equipped the Taliban are to deal with emergencies in areas under their control, which are mostly rural areas.           “We’re calling on the public to offer as much help as they can to the affected people of Merdesh village,” Mujahid said in the statement, adding that charitable organisations are also being asked to assist.

Reports reaching Parun, the Nuristan provincial capital, said water had inundated Merdesh. The village is located in Nuristan’s Kamdesh district, not far from the border with neighbouring Pakistan.

The provincial governor’s spokesman, Mohammad Sayed Mohmand, said the flooding destroyed at least 100 homes. Mohmand said he had received reports of 60 dead but that the death toll is likely much higher.

Nuristan is a mountainous region and the Taliban control large swathes of the province. Mohmand said dozens of families fled the flooding to the neighbouring Kunar region.

In the Afghan capital of Kabul, Ahmad Samim Azimi, spokesman for the disaster management ministry, said they have reports of at least 100 dead. The Nuristan government appealed to the Taliban to allow rescue teams into their area to offer help, he added.

Over the past year, a resurgent Taliban has held sway over roughly half of Afghanistan. But since the announced withdrawal of US and Nato troops from the country, the insurgents have swept through dozens of districts, seizing more land and even taking control of key border crossings.